Home World OUT OF FAILURE, A CHANCE FOR JUSTICE FOR PALESTINE

Perhaps Crowley’s “change in tactics” means that the US will abandon its role as “negotiator” and do, as the British Government did in 1947, give the resolution for peace in the mid-east to the UN where it belongs since the UN carved the Mandated land into two states in Resolution 181.

Philip Crowley, speaking for the State Department, seemed to imply a new beginning for the US as it halted the peace negotiations it had started last May, when he noted there “may well be a change in tactics.” (Aljazeera.net “US Fails in settlements freeze bid: the US suspends efforts to persuade Israel on settlement building freeze” 12/8/2010.)

Perhaps Netanyahu’s bribery of billions of US dollars for 20 F-35 fighter planes at a time when Obama’s administration is trying to get Congress to extend unemployment benefits for 3 million Americans rankled the President;

– perhaps a forced written guarantee that the US would not interfere with future settlement construction while it continued its “unconditional support” for Israel as it confiscated more Palestinian land by using its veto in the Security Council pricked the President’s conscience as he realized that he was no longer in charge in his own administration;

– perhaps the President finally understood that America cannot be the broker for peace in Palestine because it is controlled by Israel, a decided unfair advantage for a negotiator that believes in justice; and maybe, just maybe, he recognized that after all these decades of “pretended peace talks between Israel and the PLO” the Zionist government never had any intention of bringing a Palestinian state into existence thus depriving the nations of the world their opportunity to confront Israel with true Justice in international courts.

Perhaps Crowley’s “change in tactics” means that the US will abandon its role as “negotiator” and do, as the British Government did in 1947, give the resolution for peace in the mid-east to the UN where it belongs since the UN carved the Mandated land into two states in Resolution 181.

Taking such action would reduce Obama’s humiliation at the hands of Netanyahu and his hound dog, Avigdor Lieberman; it would remove, in the eyes of the world communities, the pall of distrust and hatred that the US has earned as a lackey for the Zionist regimes since Sharon ruled Israel; and it would provide a sensible and real solution to the issues that have plagued the peace process: the security of Israel, the borders of a Palestinian state, the fate of the Palestinian refugees, and the status of Jerusalem.

Since the UN has already defined the borders of Israel and Palestine in Resolution 181, modified in Resolution 242 and accepted at that time by both sides, the issues of borders can be determined by an impartial body appointed by the UNSC. It follows that Israel’s security can be assured if those borders are controlled by a UN Peace Keeping force that would monitor egress and ingress for both states. It follows also that the barriers that have been used by the Israelis to control the people of Palestine could be brought down as necessary to make the borders true state borders and not a prison wall.

Again, since the original formation of the two states by UN Resolution included an international status for Jerusalem, the condition of Jerusalem already exists as long as the UN takes control of the process. There remains only the problem of the refugees. International law determines the rights of the refugees, and hence, the action of the UN would have to be in conformity with that law. Various resolutions could be adopted including return to the Palestinian state as designed by 242, payments to the refugees in lieu of resettlement, and use of existing Israeli “settlements” for housing for refugees with adequate compensation provided for to Israel and the US. In short, with the international courts and the UN in charge, justice can finally prevail in Palestine. 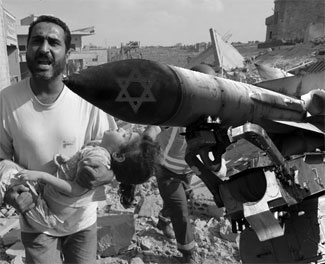 Needless to say, this proposal makes it easy for Netanyahu to act in accordance with possible UN action since it would provide an Israeli resolution to offset criticism that he was capitulating to Obama’s decision to return the problem to the UN. Crowley’s understated comment that there “will be a change in tactics” just might be an announcement of justice at last for both Palestinians and Jews.

We need only look back to see the future. Time and conditions change but humankind remains the same. Greed and power are the sinews that bind minds indifferent to the havoc they wreak on the helpless and the weak; it’s time for the US to exit the broker’s role and give the peace process to the United Nations so that justice can at last prevail.