Teri Hart: Until They All Come Home

Mother of a U.S. Soldier current serving, Teri Hart wrote and has just released this moving song “Until They All Come Home”.  She’s currently planning on hitting the road in support of her Nothin Yellow But The Ribbon tour. The song is an amazing tribute to our current troops serving and a reminder to all of us on why we do what we do.

For those of you who can, support the troops and download the song on Itunes or Rhapsody.  Share it with your family and friends.

Teri Hart got her professional start back in the 90’s playing NCO and O clubs, VFWs and American Legions. The first base she  ever played at was Reese Air Force Base in Lubbock, TX.  At that time she had two young sons, and never dreamed that one day years later she would be standing at her own son’s yellow ribbon deployment ceremony at Kirtland AFB in Albq. NM.

In Rio Rancho, NM there was an armory where her son and his unit were gearing up for the deployment.

She shared a room with her son the 3 days leading up to his ceremony, and it was early on a Thursday morning that as he was leaving the hotel for the armory to as he told me “Process beneficiary paperwork” that she had told him “You don’t need a beneficiary, you’re coming home!” just minutes after he’d told her that she was leaving out of the room to go grab some breakfast in the hotel restaurant and as she opened the door, on the floor just outside the room was the USA Today morning paper and on the cover was the image of a hummer blown to bits by an IED.  She went right back in the room and on hotel stationary by the bed and she  wrote the song “Until They All Come Home”.

On that Saturday at the big Yello Ribbon deployment ceremony she watched her son and 149 other soldiers hold yellow ribbons behind their backs in formation to hand off to their families while they were gone.  She thought “how beautiful, a sea of yellow but the word yellow means coward to some, so I am going to call my tour Nothin’ Yellow but the Ribbon®”.

She then wrote the song Nothin’ Yellow but the Ribbons.  Later on she recorded both in Branson, MO.   She is now on her mission of turning this into a full blown tour, and seeking corporate sponsorship.

She was the headline entertainment at Fort Bliss Army Base for over 3500 soldiers during their Rock the Fort event in 2008.

For all, the songs are available for download on the major retail download sites ie…Itunes, Rhapsody, and others.  They can also be accessed directly through her website  at  www.nothinyellowbuttheribbon.com  Your help in getting the word out would mean the world to Teri as she is doing this as an independent artist without the backing of the major labels!    So get out there and help Teri share the amazing voice for good and let’s get all of the troops home safely. 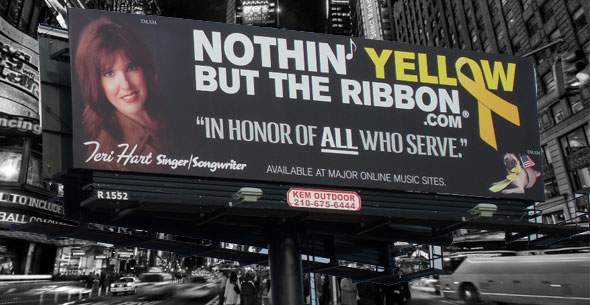 Singer/Songwriter Teri Hart, based in Austin, TX, was born just outside of Lubbock, TX. In college she joined a band out of Midland, TX and played the Texas club scene. In the 90’s Teri began recording her own songs in various studios. One of the very first songs written by Teri was a waltz entitled “The Perfect Pair”. Teri first recorded at the famous Norman Petty Recording Studio in Clovis, New Mexico, where Buddy Holly recorded so many of his hits. Teri’s waltz went on to win first place out of 86 other songs in the Making Texas Music Songwriting Competition.

Today, Teri has an extensive background as a professional entertainer,having played in Texas, California, Arizona, Ohio, Illinois, and Tennessee.

Thousands have seen her perform in venues such as five star resorts, clubs, casinos, military bases, and corporate events. She is now spearheading the musical tribute show to the Military, “Nothin’ Yellow but the Ribbon®” which features her single “Until They All Come Home”, which she wrote just 3 days away from her own son’s deployment to Iraq. Teri hopes to take this show all the way to Afghanistan, and other bases abroad to entertain the troops.

Teri also has a very special rapport with professional truck drivers, and executives within the trucking industry. She has been the featured entertainer for many driver related promotions throughout the US including, “Driver Appreciation Days” for Flying J Corporation and Comdata/Feed the Children’s “Eighteen Wheels of Hope” event in Nashville, Tennessee. Thousands of truck drivers have spent many hours listening to Teri sing, and sharing stories at the travel centers.

She’s been on the air with legendary DJ Bill Mack, initially during his trucking show with WBAP, and then again on XM Satellite Radio.

Teri’s show covers a wide variety of genres including classic rock, traditional & contemporary country, R&B, oldies, pop, and originals. This exciting mix offers something for everyone and appeals to any age group.
On several occasions, Teri has teamed up with corporate sponsors across the U.S. promoting their products via stage banners, PA announcements and customer “meet & greets.” It has been said Teri is a “walking, talking, singing billboard!”