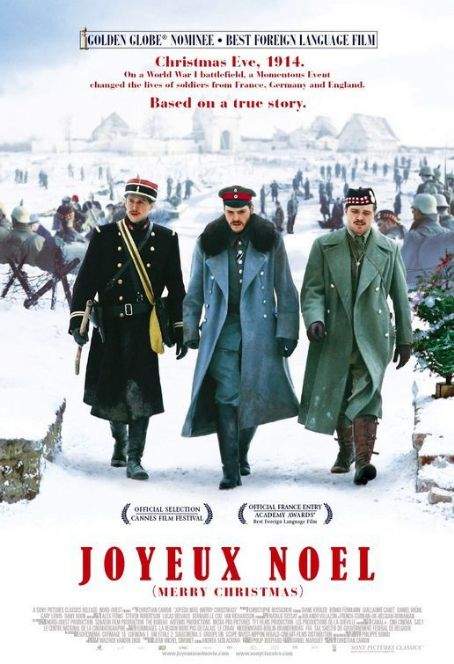 This Christmas do yourself a favor and rent Joyeux Noel ~ a must see affirmation that all wars are civil wars because all men are our brothers. Now, more than ever, war has become a high powered tech game ~ but its victims are still human beings, who are murdered in political quarrels that were not of their own making: Allen L Roland

This movie is a “based on a true story” film, which takes place  during WW1, on Dec.24th ~ where  several groups of enemies (French, British, and Germans), while ensconced in trenches just yards away from each other, called a temporary truce and celebrated Xmas together and buried their dead comrades.

In this depiction a troop of Scots, French, and Germans sang, drank, play games, and celebrate a mass given by the priest in the group. All of this was done without approval from their superior officers and in each troop’s case; they are all punished by being sent to the harshest fighting conditions at the end. What really tugs at your heart is that they all look at each other and except for the language differences, realize that they are all the same. It is war that has made them enemies but if not for that they would all be friends !

And therein lies my point ~ We separate ourselves from our common humanity and connectedness through war and the only ones who seem to benefit are military contractors and the vast Military Industrial Complex.

As Michael Ignatieff wrote, New York Times, Jul. 28, 2002, “America’s entire war on terror is an exercise in imperialism. This may come as a shock to Americans, who don’t like to think of their country as an empire. But what else can you call America’s legions of soldiers, spooks and special forces straddling the globe?”

But not all of the Generals and Admirals have bought into this military Imperialism ~ “ I hate it when they say, ‘He gave his life for his country.’ Nobody gives their life for anything. We steal the lives of these kids. We take it away from them. They don’t die for the honor and glory of their country. We kill them.” Admiral Gene LaRocque.

And not all of the soldiers either ~ “To those who have called me a coward I say that they are wrong, and that without knowing it, they are also right. They are wrong when they think that I left the war for fear of being killed. I admit that fear was there, but there was also the fear of killing innocent people, the fear of putting myself in a position where to survive means to kill, there was the fear of losing my soul in the process of saving my body, the fear of losing myself to my daughter, to the people who love me, to the man I used to be, the man I wanted to be. I was afraid of waking up one morning to realize my humanity had abandoned me.” – Sgt. Camilo Mejia, who served one year in prison for refusing to return to fight in Iraq. He was released from prison Feb. 15, 2005.

And not all of our citizens either ~ for we need to demand to be heard and revolt against war if necessary  ” Strike against war, for without you no battles can be fought! Strike against manufacturing shrapnel and gas bombs and all other tools of murder! Strike against preparedness that means death and misery to millions of human beings! Be not dumb, obedient slaves in an army of destruction! Be heroes in an army of construction!  Helen Keller. – Source: Told to an audience at Carnegie Hall one year before the United States entered World War I. From ‘Declarations of Independence’ by Howard Zinn page 75

And that includes presidents ~ “Every gun that is made, every warship launched, every rocket fired signifies in the final sense, a theft from those who hunger and are not fed, those who are cold and are not clothed. This world in arms is not spending money alone. It is spending the sweat of its laborers, the genius of its scientists, and the hopes of its children. This is not a way of life at all in any true sense. Under the clouds of war, it is humanity hanging on a cross of iron.” Dwight D Eisenhower

In this season of love ~ who else is seeing WAR for what it truly is?  “In the beginning war looks and feels like love. But unlike love it gives nothing in return but an ever-deepening dependence, like all narcotics, on the road to self-destruction. It does not affirm but places upon us greater and greater demands. It destroys the outside world until it is hard to live outside war’s grip. It takes a higher and higher dose to achieve any thrill. Finally, one ingests war only to remain numb.” Chris Hedges War Is a Force that Gives Us Meaning

And here is a 13 minute video of Chris Hedges, Daniel Ellsberg and Ray McGovern along with over 500 fellow anti-war veterans who chained themselves to a fence outside the White House last Friday during a driving snow storm to protest Obama’s continued occupation of Afghanistan. The mainstream media totally ignored this event ~ despite the fact that an ABC/Washington Post Poll found that 60% of Americans now feel that war has “not been worth it.” That’s a big increase from the 53% who said they opposed the war in July.

And here are Chris Hedge’s comments on Monday after being arrested and held in a cold and damp Washington, DC jail ~ “The tears and grief, the halting asides, the catch in the throat, the sudden breaking off of a sentence, is the only language that describes war. This faltering language of pain and atonement, even shame, was carried like great, heavy boulders by these veterans as they tromped slowly through the snow from Lafayette Park to the White House fence. It was carried by them as they were handcuffed, dragged through the snow, photographed for arrest, and frog-marched into police vans. It was carried into the frigid holding cells of a Washington jail. If it was understood by the masters of war who build the big guns, who build the death planes, who build all the bombs and who hide behind walls and desks, this language would expose their masks and chasten their hollow, empty souls. This language, bereft of words, places its faith in physical acts of nonviolent resistance, in powerlessness and compassion, in truth. It believes that one day it will bring down the house of war.”

Last year the U.S. continued to beat the drums of war by reactivating the Fifth Fleet, giving it the ability to project considerable naval power throughout Latin America ~ thus increasing the scope of the Columbia military base agreement. A number of countries are rightfully getting nervous, especially those that the State Department considers “anti-US”: Venezuela, Cuba, Ecuador, Paraguay, Nicaragua, and Bolivia. The term “unfriendly” could also include Argentina, Chile, Uruguay, and even Brazil, which has helped lead a continent-wide independence movement against U.S. domination of the region.

Eva Golinger, winner of the International Award for Journalism in Mexico (2009) writes of the need for the same revolution in America ~ “The US has a rich history of revolution. There are many groups inside the US dedicated to building a better, more humanist system. Unity and a collective vision are essential aspects of building a strong movement capable of moving forward. Every nation has its moment in history. This is the time of Latin America. But there is great hope that the people of the US will soon unite with their brothers and sisters south of the border to bring down Empire and help build a true world community based on social and economic justice for all. “

So this Christmas, let us celebrate love, universal brotherhood and connectedness while condemning war for what it truly is   ~ a dark cancer of the soul which can only be eliminated  through social cooperation and altruism, which are also the  driving forces of evolution.

It was Rumi ( the poet of love ) who wrote ~ Out beyond ideas of wrong doing and right doing, there is a field, l’ll meet you there ~

That field is not a battlefield ~ it is an energy field of love and soul consciousness ( the Unified Field )  which exists not only beyond time and space but also deepest within us all and whose principle property is the universal urge to unite.

We resist this urge at our peril ~ for love is the only force that gives us
true meaning.