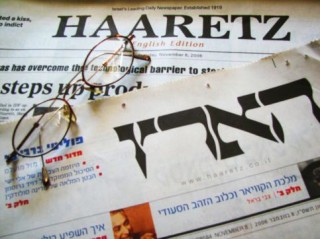 Haaretz has an international reputation as Israel’s most liberal and reliable newspaper. But The Electronic Intifada has discovered that one of the newspaper’s regularly-featured reporters, Cnaan Liphshiz, used his news reports for the publication to promote the agenda of an extreme pro-Israel group, CIDI, with which he was also employed. Journalist Stan van Houcke describes CIDI as an organization whose main goal is to cover up Israel’s violations of international law.

By Ali Abunimah, The Electronic Intifada

At the same time, Liphshiz appears to have made efforts to conceal his work with the Dutch Zionist group CIDI (Centre for Documentation and Information on Israel), an undisclosed conflict of interest which calls into question the reliability of his reports and the editorial standards of Haaretz.

CIDI has confirmed to The Electronic Intifada that Lipshiz worked for the organization, and is likely to work for them again in the future.

CIDI has earned a reputation as one of the staunchest advocates for Israel in the Netherlands, launching stinging personal attacks and smears on public figures and groups who dare to call on Israel to respect human rights. In an article for The Electronic Intifada, Stan van Houcke, a Dutch journalist and author, described CIDI as an organization whose main goal is to cover up Israel’s violations of international law (“Dutch ‘research’ group covers for Israeli crimes,” violations, 5 November 2007).

On 17 December, Haaretz published a profile by Cnaan Liphshiz of Dutch Foreign Minister Uri Rosenthal (““Dutch FM: Ties with Israel are like our bond with NATO“).

In the story, Liphshiz writes: “One of Rosenthal’s first statements regarding Israel as minister concerned the website The Electronic Intifada … .”

It would appear that Liphshiz is more interested in promoting NGO Monitor’s and CIDI’s campaign against The Electronic Intifada — and more generally against critics of Israel’s appalling human rights abuses — than acting as a professional and transparent journalist.

Cnaan Liphshiz is scheduled to take part in Jewish Identity Day activities in the Netherlands on 9 January 2011. The official website promoting his participation stated that:

“Cnaan is an Israeli reporter for the well-known nespaper [sic] “Haaretz”, and the European Jewish Press, focusing on the campaign to delegetimize [sic] Israel in Europe. Cnaan also writes about immigration trends and Jewish world news.”

It explained that “His background in journalism grew out of serving in the Israel Defense Forces during the second intifada, first as a special forces combatant and then, following an injury, as an intelligence corps researcher in a unit monitoring the intelligence apparatuses of hostile and rival entities.”

It also revealed that, “Before coming to Holland to work at CIDI, He lived in Florentin, a neighborhood in the south of Tel Aviv … .”

Website metadata indicate this webpage was created in October 2010.

After The Electronic Intifada began its inquiries regarding Liphshiz’s undisclosed dual status as a frequent Haaretz reporter and an employee of CIDI, the Jewish Identity Day website was changed to omit any reference to Liphshiz’s employment with CIDI or that he apparently moved to The Netherlands specifically to work for the organization. The relevant section now simply states:

“Before coming to Holland, He lived in Florentin, a neighborhood in the south of Tel Aviv … .” (http://www.jewishid.nl/shmuel-katzman).

However, Google cache and copies of the webpage made by The Electronic Intifada before it was changed confirm the apparent effort to conceal information about Liphshiz’s affiliation with CIDI.

CIDI’s public information officer, Naomi Mestrum, confirmed in a response to questions emailed by The Electronic Intifada that “CIDI knows Mr. Cnaan Liphshiz, but he is not an employee of our organisation. However Mr. Liphshiz did a project involving research for us on a freelance basis this year.”

In response to further inquiries, Mestrum added that Liphshiz “helped us update a statistical research on Jewish immigration to and from Europe. He may help us update and elaborate the same database in the future.”

Regardless of technicalities of whether he is paid as a freelancer or on regular payroll, CIDI confirmed a past and likely future pecuniary relationship between CIDI and Liphshiz. Mestrum did not respond to a question regarding the start and end dates of Liphshiz’s paid work for CIDI.

Halle pointed out that Liphshiz’s most recent pieces, including the 17 December profile of Uri Rosenthal, had been commissioned not by the Haaretz English edition but in the online edition.

Gadi Lahav, editor-in-chief of Haaretz online, wrote to The Electronic Intifada that “Cnaan Liphshiz was previously employed by Haaretz, but is now writing occasionally on a freelance basis. Mr. Liphshiz denies that he is employed on a permanent basis by any organization, including CIDI.”

In an apparent reference to Liphshiz’s 17 December article, Lahav added, “As for this specific article, it wasn’t published by the printed edition, and it seems it ran on the website by mistake.”

Liphshiz did not respond to a request for comment emailed to him at an address provided by Mestrum.

What is now clear is that Liphshiz has maintained for an extended period an employment relationship with both Haaretz and CIDI that should have been disclosed to readers and was not. Liphshiz continues to try to evade giving his editors or the public clear answers about the status of his relationship with CIDI. This is not a case of a freelancer writing one or two articles and failing to disclose a passing relationship with an organization that might have been mentioned once or twice, but a regular writer who has contributed dozens of articles favorable to the organization for which he worked, and advancing its advocacy agenda.

Using Haaretz as a cover to push CIDI’s agenda

Liphshiz’s dual role with CIDI is both a matter of public interest, and conflict of interest for Haaretz. In his reports for the newspaper, Liphshiz frequently cites information provided by CIDI without any countervailing view or analysis and without disclosing his own relationship to the group, as a few examples illustrate.

In a 27 June 2008 profile of Dries van Agt, a former Dutch prime minister and outspoken critic of Israel’s human rights violations, Liphshiz counters van Agt’s charges that Israel is “making frequent and excessive use of deadly force against the Palestinians,” by citing CIDI. Liphshiz then cites accusations of “anti-Semitism” against van Agt from various “accusers,” some of whom are unnamed (“‘Dutch Jimmy Carter’ accuses Israel of terrorism in new book“). Many criticisms and questions Liphshiz directs against van Agt appear to be lifted from an article written in Dutch by CIDI founder Ronny Naftaniel (“Van Agt heeft selectief geheugen“).

In an 2 April 2008 story, Liphshiz misleadingly casts CIDI and its director Ronny Naftaniel as courageous defenders of Muslims against the rising tide of Islamophobia in the Netherlands (“Dutch Jews louder than Muslims in condemning ‘Fitna’ film“).

Naftaniel claims credit for criticizing a film by Dutch Islamophobic demagogue Geert Wilders. “We are never afraid to speak out in the harshest of terms against what we think is wrong, be it against Muslim extremism here in the Netherlands, or the Dutch or Israeli governments,” Liphshiz quotes Naftaniel as saying. “But this movie portrays all Muslims as The Enemy. And this is just not true.”

These are examples of numerous articles in which Liphshiz provides an uncritical and favorable platform to CIDI and its (his) boss in Haaretz but does not disclose his relationship.

“Delegitimization” is a political stance not a reporter’s beat

The description of Liphshiz on the Jewish Identity Day website as a journalist “focusing on the campaign to delegetimize [sic] Israel in Europe” is troubling. The characterization of the activities by Palestine solidarity activists and Israeli human rights groups as “delegitimization” is a political stance promoted by such organizations as CIDI itself, NGO Monitor, The Reut Institute and the Israeli Foreign Ministry.

On 9 December, for example, Israeli Deputy Foreign Minister Danny Ayalon held a press conference at which NGO Monitor director Gerald Steinberg named The Electronic Intifada as “a very powerful organization” at the center of a global network to “delegitimize” Israel (transcript of press conference via Israeli Ministry of Foreign Affairs).

That Liphshiz may take it as a given that Palestine solidarity activities constitute “delegitimization,” suggests he is less a truth-seeking journalist, than a foot soldier in Israeli government-endorsed propaganda efforts.

In the 17 December article profiling Rosenthal, for example, Liphshiz even repeats claims made by NGO Monitor that the Dutch embassy in Tel Aviv has a “pro-Palestinian agenda” — simply because it has upheld long-standing Dutch government policies regarding the occupied Palestinian territories.

While reporters and journalists may have affiliations to, and may advocate for political and activist groups in accordance with basic freedoms of association and expression, the essence of ethical practice is disclosure of these relationships whenever relevant, especially if they could be seen as affecting the reporter’s work or judgment. In this case Liphshiz has been passing off his advocacy for CIDI as “news” reporting under the banner of Haaretz.

Perhaps Liphshiz sees his “journalism” work as a mere continuation of his time “as an intelligence corps researcher in a unit monitoring the intelligence apparatuses of hostile and rival entities” — in which case disclosure would of course be a problem.

If Haaretz wishes to rescue its journalistic reputation it would be well-advised to ensure that it does not become a mere vehicle for political smear campaigns conducted by extremist organizations and their operatives.

Ali Abunimah is co-founder of The Electronic Intifada and author of One Country: A Bold Proposal to End the Israeli-Palestinian Impasse.