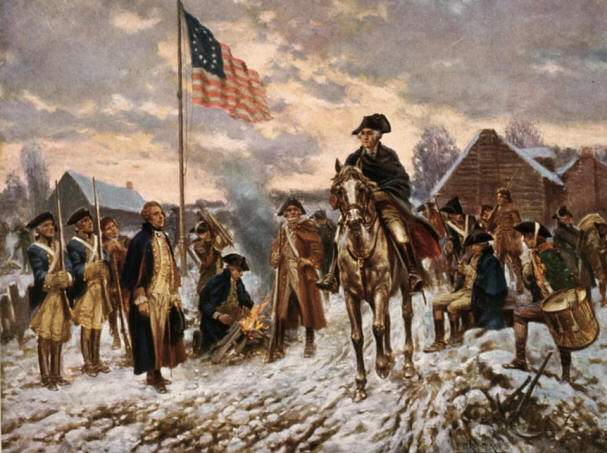 WASHINGTON — The second year of our declared independence found General George Washington’s Continental Army encamped at Valley Forge, Pennsylvania.  In the week before Christmas of 1777, more than 12,000 poorly-clothed, hungry and near-frozen American soldiers were huddled against a brutal winter, enduring the numbing cold as disease ravaged their ranks.  As many as 2,000 of them did not survive Valley Forge.

General Washington wrote that, “unless some great and capital change suddenly takes place. . . this Army must inevitably. . . starve, dissolve, or disperse, in order to obtain subsistence in the best manner they can.”

Despite these bleak conditions, the fighting men of the Continental Army lifted their own spirits, located much needed supplies and took to training with determined vigor. They honed their basic fighting skills, learned new tactics, preserved their dwindling strength and disciplined themselves for the difficult campaign that would follow.  It was an act of sublime courage and determination.  Six months later, the Continental Army marched out of Valley Forge fit and ready, stronger and more cohesive as a fighting force, and went on to seize American independence.

Since that winter, American patriots in an unbroken line have found themselves on duty during the holiday season each year.  Our freedom and security as a nation has required it.  So as Americans and their families gather to celebrate these holidays, let us remember the men and women, who sacrifice so much for our privileges, comforts and well-being.  They are away from their own families, standing watch for us on freedom’s distant frontiers.  We salute their valor, past and present, and we pray for them and our Veterans, who have so selflessly given us the gifts we enjoy this holiday season, as we have every season since 1775.

I offer my warmest best wishes for a blessed and joyous holiday to all our serving military, our Veterans, all of their families, the survivors of the fallen, and the members of our Veterans Affairs family, who are privileged to serve them.  May God bless each and every one of you, and may God continue to bless this wonderful country of ours.  Merry Christmas.