This statement was sent into VT via Facebook on December 21, 2010 from the young Iraq and Afghanistan Veterans’ group March Forward and is closer to the reality of war than the sanitized versions of Happy Military Family Reunion promoted by mainstream media.

March Forward! Joins other Peace Veterans in 16 Dec Protest at the White House

On Dec. 16, President Barack Obama reported on the findings of intelligence analysis on the war in Afghanistan. Through all the rhetoric of “progress” in the country, one fact was made crystal clear: the war will rage on, with heavy combat and increasing casualties, for many years to come. 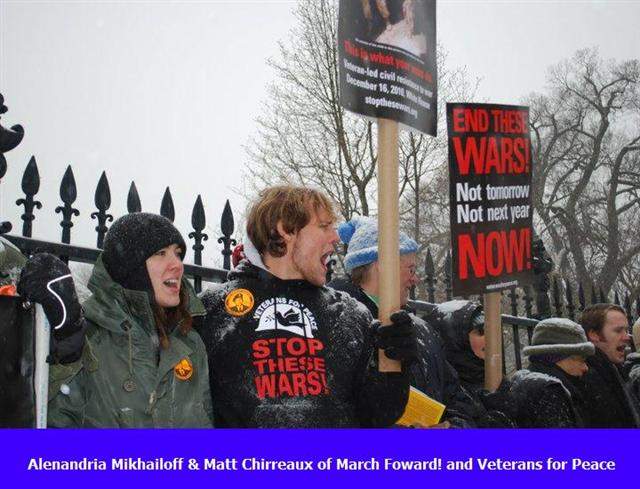 Organized by Veterans for Peace, March Forward!, the ANSWER Coalition (Act Now to Stop War and End Racism) and several other organizations, the action was the largest veterans-led civil disobedience since the wars began 10 years ago. Veterans of Afghanistan, Iraq, Vietnam, Korea, World War II and other conflicts were among those arrested.

Drawing hundreds of veterans and anti-war activists, this dramatic act of civil resistance came at a time when the U.S. government has made the admission that it will not cease its war drive in Afghanistan, its frequent drone strikes in Pakistan or undertake any real withdrawal from Iraq.

The masses of people rejected U.S. foreign policy in the 2008 election, voting for President Obama with the misguided but well-meaning hope that his election would lead to real change. This hope has proven to be false. Left to its own devices, Washington will continue its war drive to carve up the globe in the interests of Wall Street. The only thing that will stop it is a dedicated and militant fight-back from veterans, GIs, youth, activists and working people who operate outside of the political establishment, who fight back in the only way history has shown that progressive change is made–as a united, independent people’s movement in the streets, challenging the entire system. 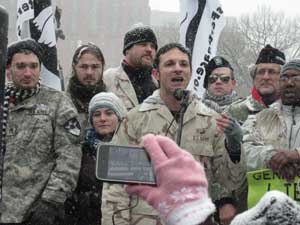 March Forward! co-founder Mike Prysner spoke at the rally at Lafayette Park, joined on stage by nearly a dozen March Forward! veterans of Afghanistan and Iraq, including active-duty troops. He said: “This government isn’t going to end these wars, because it’s not our government. It’s the government of the rich, of Wall Street, of the oil giants and defense contractors. It’s their government. And the only language they understand is shutting down business as usual. That’s what we’re doing today, and what we will continue to do in the days ahead until we end these wars.” 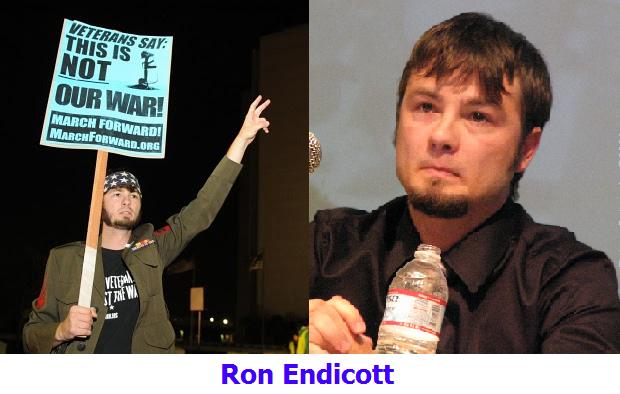 While being interviewed by the press at the action, Ryan Endicott, a March Forward! member who served as a Marine Corps infantryman in Ramadi in 2005, said: “The transformation I went through, from being on the front lines of the war to the front lines of the anti-war movement, is something that every GI can go through, because at bottom, these wars are not in our interests, and we have no reason to fight them. Actions like this one today, and the ones we will continue to carry out, will reach those GIs and veterans who have questioned the war and inspire them to join us in this fight to stop the crimes committed against our brothers and sisters in uniform, and our brothers and sisters in Iraq and Afghanistan.”

In total, 135 veterans, community leaders, and anti-war activists were arrested for refusing to budge from the White House fence. Supporters braved the snow and freezing temperatures, and kept lively chants going for hours until the last veteran was dragged away by the police.

It took the police over four hours to clear the area of the civil disobedience action. In the spirit of a long, rich history of using civil resistance to advance the struggle for progress, this act of defiance marked a significant step in the re-invigoration of the anti-war movement, in this era of perpetual war that will rage on until halted in its tracks by the people themselves.

March Forward! will continue to organize civil resistance and mass actions to bring an end to these criminal wars. Join us!

Who is March Forward?

March Forward! is an affiliate of the ANSWER Coalition (Act Now to Stop War and End Racism). Along with others in the Coalition, March Forward!  organizes against the Iraq and Afghanistan war while fighting for social and economic justice at home—including the struggle against racism and all forms of discrimination and bigotry. March Forward! operates based on the belief that real change comes through struggle and mass action.

In 2008, veterans and active-duty service members who had been seasoned activists and leaders in the movement against the Iraq war joined together to form March Forward! Our aim is to unite all those who have served and who currently serve in the U.S. military, and who want to stand up for our rights and for that which is right!

March Forward! members are also active supporters and/or members of other progressive veterans’ organizations, including Veterans for Peace and Iraq Veterans Against the War. We are actively building a multinational, multigenerational group of veterans and service members who will stand up and fight back against the injustice perpetrated by the Pentagon against our sisters and brothers throughout the developing world, against working and poor people in the United States, and against those still serving in the U.S. military.