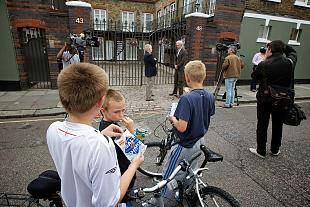 WikiLeaks and the press

Paul J. Balles views the self-serving criticism of WikiLeaks and its founder, Julian Assange, offered by a range of media but argues that, ultimately, the whistleblower website’s exposure of cover-ups and promotion of transparency justify its actions.

The press is down on WikiLeaks and Julian Assange for all the wrong reasons.

They ought to be after Assange for giving governments reasons for censorship – just the opposite effect of the transparency he presumably wanted to promote.

“What is the press after him [Julian Assange] for? Whatever happens to suit the politics or niche of their publication or network.”

What is the press after him for? Whatever happens to suit the politics or niche of their publication or network.

Scandal sheets are going after Assange for an alleged sexual offence in Sweden, where a couple of his consensual sex partners admitted that they wouldn’t have pressed charges if Assange had willingly been tested for HIV.

The gossip sheets have been denigrating Assange for social ineptitude. Stories about his dictatorial rudeness seem to abound in these rumour mills.

A story appearing in one of the gossip sheets reports that an American journalist said: “Mr Assange was unusually rude, and when he offered him a copy of his recent, well-reviewed book, he said: ‘Don’t bother. I’d only throw it away.’ After that, he says Mr Assange ignored him, focusing intently on his girlfriend instead.”

Another newspaper has been trying to bring Andy Coulson to book for his alleged role in the News of the World phone hacking affair but has no compunction in revealing nuggets of gossip and information to the world obtained illegally by WikiLeaks.

Other reporters have questioned Assange’s belief in total openness, saying that national security is at risk and should be a consideration.

Some of those same newspapers enjoy adding that Assange “delights in asking politicians what they have to hide” but doesn’t believe in total openness for himself.

The Daily Mail claims: “He preaches openness but demands privacy. He reveals ‘secrets’ but 99 per cent are prurient gossip. He’s accused of rape but won’t face his accusers. Why do the left worship the WikiLeaks ‘god?”

The Jerusalem Post doesn’t seem to think Assange is such a bad guy. None of the cables from WikiLeaks about Israel embarrassed or irritated Israelis.

Judith Levy asks: “How has Israel responded to the WikiLeaks information dump? Mostly with a shrug.”

She adds: “What revelations there were about us are mostly positive, and they fall predominantly in the ‘Friends You Didn’t Know You Had’ category.”

Could it be that those who send cables know that Israelis spy on everything? Diplomats don’t dare expose uncomfortable truths about Israel.

Dutch Business Insider SAI, as might be expected, revealed concern about WikiLeaks that affect business.

“Two young Dutch hackers,” they relate, “who attacked sites like Visa in protest at actions against WikiLeaks were arrested, and now one of them gave an interview.”

The Wall Street Journal reports that “Bank of America Corporation, thought to be a potential target of WikiLeaks, became the latest US company to ban transactions of any type that we have reason to believe are intended for WikiLeaks.”

Yahoo News claims: “Assange really didn’t like last month’s New York Times profile of him – so much so, apparently, that he opted against giving the Times an advanced look at the State Department cables his organization began publishing…”

Adds Yahoo: “It’s not the first time Assange has cut off a news organization following a WikiLeaks profile that he didn’t consider to be completely accurate.”

Investigative historian and journalist Gareth Porter, writing in Counterpunch, revealed how Russians challenged the existence of a mystery missile the US claims Iran acquired from North Korea.

But readers of the two leading US newspapers never learned key facts about the document. According to Porter, WikiLeaks revealed how the press has been complicit in cover-ups by the government.

That alone should justify WikiLeaks’ efforts to expose cover-ups and promote transparency – even in the press.