UPDATE to homeless veterans.
It looks like the VA may want to stop veterans from living on the streets only so far. This is a report out of Oregon.

VA Vouchers Have A Hold Up
Tuesday, December 28th 2010 08:46am
The Veteran’s Administration is sending over a caseworker to help provide some subsidized housing vouchers for homeless veterans. The “Veterans Affairs Supportive Housing Program,” known as “VASH” issues vouchers to eligible homeless vets that will pay 70 to 100% of their rent. There’s been a holdup because of hiring freezes at the VA. Kenny LaPoint with Housing Works that helps administer the program says some help is on the way: “They bring over somebody who can make decision as to who receives vouchers. Technically, it’s an off site caseworker. It doesn’t solve the problem permanently, because we don’t have a caseworker in the area and we’re not able to issue the entire amount of vouchers that we have, it sounds like it will be able to issue between 5 and 10 vouchers at this time.” The way the program works is eligible veterans apply and VA caseworkers decide who will get the 25 vouchers for Central Oregon veterans. The vouchers are then applied to their rent. LaPoint hopes a permanent caseworker will be here next month.

Not enough case workers were hired to pick up on processing the efforts made to get homeless veterans into housing. A hiring freeze at the VA is not going to solve anything when more and more veterans need help. 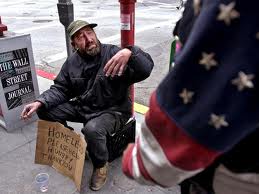 Homeless veterans get a break Group offers ex-servicemen stay at motel
BY R. NORMAN MOODY • FLORIDA TODAY • DECEMBER 26, 2010
TITUSVILLE — Jimmy Suggs lowered his head and wiped away tears as he spoke about spending Christmas away from his homeless camp in the woods on Merritt Island.

“It makes me very happy somebody cares about me,” he said.

The National Veterans Homeless Support with help from the community, businesses and local churches treated Suggs and 46 other homeless veterans to two nights in motel rooms, and gave them gifts of clothes, a tent, sleeping bags and other necessities for their return to wooded camps across Brevard County.
Homeless veterans get a break

Two days ago people celebrated the day Christ was born after weeks of shopping for gifts and decorating their homes. Hours spent cooking a feast to feed family and friends. All of this for the birth of Christ when the Bible does not say when He was born while the rest of the year few care about what He said.

Matthew 25
The Sheep and the Goats
31 “When the Son of Man comes in his glory, and all the angels with him, he will sit on his throne in heavenly glory.

32 All the nations will be gathered before him, and he will separate the people one from another as a shepherd separates the sheep from the goats.

33 He will put the sheep on his right and the goats on his left.

34 “Then the King will say to those on his right, ‘Come, you who are blessed by my Father; take your inheritance, the kingdom prepared for you since the creation of the world.

36 I needed clothes and you clothed me, I was sick and you looked after me, I was in prison and you came to visit me.’

37 “Then the righteous will answer him, ‘Lord, when did we see you hungry and feed you, or thirsty and give you something to drink?

38 When did we see you a stranger and invite you in, or needing clothes and clothe you?

39 When did we see you sick or in prison and go to visit you?’

40 “The King will reply, ‘I tell you the truth, whatever you did for one of the least of these brothers of mine, you did for me.’

41 “Then he will say to those on his left, ‘Depart from me, you who are cursed, into the eternal fire prepared for the devil and his angels.

44 “They also will answer, ‘Lord, when did we see you hungry or thirsty or a stranger or needing clothes or sick or in prison, and did not help you?’

46 “Then they will go away to eternal punishment, but the righteous to eternal life.”

There are a lot of advocates for all homeless people and rightly so but there are few focusing on homeless veterans. Some wonder why there should be any difference in the way we treat homeless people but they are missing the reason why so many veterans end up homeless. Too many suffer for their service. Too many families walk away when they come home changed. Too many didn’t have a supportive family in the first place so the odds of them having a family to stand by their side after were not good. Self medicating PTSD instead of being treated. Heartless business people assuming every combat veteran is crazy or dangerous and refuses to hire them. VA claims that should have been approved, turned down or tied up taking away the veteran’s opportunity to support themselves for a year or more. This after being willing to die for the sake of the country they served.

Should all the homeless be taken care of? Yes but when it comes to veterans, the “harvest is plenty but the workers are few” and fewer people want to take care of the veterans. If we fail to take care of veterans what chance does a regular civilian have? The best Christmas gift to really honor Christ is to live the rest of the year as if He mattered and that we “love our neighbor as ourselves.”