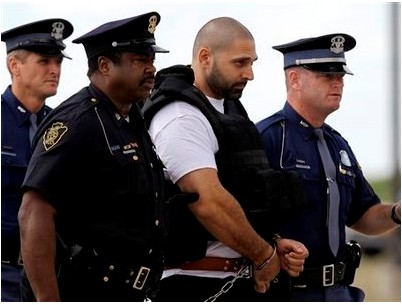 ANOTHER STORY “DISAPPEARED” FROM THE NEWS, “WIKI-STYLE”

Leyton says it happened some time ago and he isn’t revealing the suspect’s name. Attempted poisoning can carry a penalty of up to 10 years in prison.  Abuelazam faces charges of murdering three people and trying to murder five others for a series of stabbings in the Flint area. He’s also charged with attempted murder in Toledo, Ohio, and suspected in similar attacks in Leesburg, Va., where he once lived.

Abuelazam was arrested in Atlanta on Aug. 11 while trying to fly to his native country, Israel.”

EDITOR’S NOTE:  AS USUAL, THE MAINSTREAM PRESS, WITH ITS “WIKI-FASHION” CENSORSHIP, OR AS IT IS NOW CALLED “SENSITIVITY” TO ANYTHING ABOUT ISRAEL, HAS CONTAINED THIS STORY AS IT HAD THE “CROTCH BOMBER” OF LAST CHRISTMAS.  WHEN MILLIONS OF AMERICANS CAN’T MANAGE TO BOARD AIRCRAFT WITH OUR OWN UNDERWEAR INTACT, TERRORISTS WITH BOMBS, SERIAL KILLERS, NO PASSPORTS, VISAS, TICKETS, BUT WITH ISRAELI FRIENDS, TRAVEL LIKE ANGELS ON WINGS OF HEAVEN.

BELOW, THE AUGUST 2010 STORY AND, PERHAPS, SOME INSIGHT INTO WHY THIS INFAMOUS SERIAL KILLER CASE DISAPPEARED INTO THE WOODWORK, AND THE ACCUSED KILLER NEARLY DISAPPEARED WITH IT, FIRST TO ISRAEL AND THEN, TO THE NETHERWORLD

EVERY PASSENGER BOARDING A FLIGHT TO ISRAEL IS ROUTINELY QUESTIONED BY SECURITY PERSONNEL AT THE GATE.  THIS IS A LONG STANDING PROCEDURE INSTITUTED BY ISRAEL LONG AGO AND HAS BEEN HIGHLY EFFECTIVE IN ASSURING THAT NO PASSENGER WITHOUT GOVERNMENT APPROVAL CAN BOARD A PLANE FOR ISRAEL.

“If this lame f%#@ would have made it they never would have kicked him back”…..Robert Walsh, law professor

Elias Abuelazam, 33, an Israeli national arrested on suspicion of terror attacks in Michigan, Ohio and Virginia, leaving at least 5 dead and many wounded, was captured on a flight to Tel Aviv waiting for departure at the Atlanta airport by US Customs officers.  Elias was captured with an expired Israeli passport.  Israeli security officers that screen all passengers boarding flights to Israel had two reasons to stop him.  That Abuelazam was the subject of a nationwide manhunt in which Israeli security is routinely notified, is one.  The other, of course, is the expired passport.  A “special exception” had to be made to allow Abuelazam on the plane to Israel, a country with no extradition treaty with the United States.

Abuelazam worked at an Islamic owned convenience store in the small town of Beecher, Michigan.  Most of Abuelazam’s attacks were on African-American males including his latest, in Toledo, Ohio, the slashing of a church custodian.  The victims were all Christians.  The Jerusalem Post, an Israeli “right wing” publication, identified Abuelazam as a “Christian Israeli.”

Initially identified as a “budding serial killer,” Abuelazam managed to travel across the United States with no known source of funds or support, eventually attempting to flee to Israel when both a reliable likeness was distributed and his vehicle, a green Chevrolet Blazer, was identified.

Knife attacks in Flint or Detroit aren’t, in themselves, remarkable.  That a single suspect would quickly murder so many people and be involved in so many attacks, particularly a suspect mis-identified as an Arab, made front page news for weeks across the region, keeping communities in a very real state of terror.

“That Abuelazam could manage to get through the tightest airport security screening in the world, boarding a flight to Israel, without a valid passport should be impossible,” said an FBI spokeman “off the record.”

“Nobody gets into Israel that they don’t want.”

Of late, many Israeli citizens of Palestinian origin have been denied reentry to Israel.  In each case, they are refused boarding rights on planes.  No individual boards a flight to Israel without a security check, overseen by Mossad trained officers.

“The whole thing sounds fishy.  In fact, it is too similar to the “crotch bomber” who boarded a flight from Amsterdam to Detroit without a passport.  The idea of a single male in his early 30s, especially one who is likely to be acting not just suspiciously but perhaps ‘disturbed’ getting through security for anywhere nowadays is not believable.  Make it a plane to Tel Aviv, no passport, a wanted fugitive and we have something clearly wrong.  These things simply don’t happen anymore, not without people losing their jobs or worse, perhaps much worse.  It was a lucky break that law enforcement officials caught him on video, this combined with the vehicle description sent him running.  There is no knowing how many more would have died.

Another point is his identity itself.  We are told he is in the United States “legally” but is an Israeli citizen.  Yet his passport is expired.  First he is “Middle Eastern” then Muslim, then Jewish then Christian.  It all sounds like someone didn’t have enough time to get their cover story in good shape.”

The Israeli paper, Haaretz, in a story about a 2007 attempt to extradite an orthodox Jew from Israel, in this case, a sexual predator indicted in New York, reports the following:

“The U.S. Justice Department has asked Israel to facilitate the extradition of an ultra-Orthodox Jewish man suspected of raping and sexually abusing dozens of boys.

Avrohom Mondrowitz was investigated by the New York Police Department in the 1980s and was indicted for sex crimes against four boys in Brooklyn, N.Y., but fled to Israel before he could be arrested.

According to witness reports, 60-year-old Mondrowitz, a married father of seven, would pose as a psychologist specializing in the treatment of children that suffered sexual abuse.

Mondrowitz currently resides in Jerusalem. Over the years he has worked in several educational institutions, but he is now unemployed, and allegedly supports himself by selling forged academic degrees.  Mondrowitz refused to answer questions regarding the allegations against him.”

In a Russia Television report, the Israeli government indicates that it will no longer protect Jewish criminals from prosecution as they had in the past:

“Extradition Lawyer Eitan Maoz says that even if in the past Israel may have been considered a safe heaven for criminals, now it is no longer the case.

‘During the nineties, Israel was well-known to be a safe haven, especially for Jewish people that could come and get Israeli citizenship through the Aliya process and stay here very calmly because Israel won’t be extraditing its own citizens,” he said. “After the nineties this law was amended, and so Israel is no longer a safe haven for criminals.’”

The best known case thus far involved Samuel Shinbein, accused of killing, dismembering and burning a teenager in 1997.  The Israeli Supreme Court refused to extradite Shinbeing despite demands by Attorney General Janet Reno.  From Laura Blumenfeld and Kathryn Shaver of the Washington Post:

“Israel’s Supreme Court ruled yesterday that Samuel Sheinbein, charged with killing, dismembering and burning another Montgomery County teenager in September 1997, is a citizen of Israel and cannot be extradited to the United States.

Sheinbein, 18, who never lived in Israel but whose family sent him there three days after Alfredo Enrique Tello Jr.’s mutilated and charred torso was found, remains in custody, and Israeli officials said he will be indicted there within days on a murder charge.

The court’s ruling disappointed U.S. officials and created a furor among some Israelis, who said the country should not provide a haven for murderers. Tello’s mother, Eliette Ramos, speaking publicly for the first time since the death of her son, 19, denounced the court’s decision as “ridiculous.”

“He should be held accountable here,” Gansler said. “Our view is that Mr. Sheinbein does not fit within [Israel’s extradition] law. He shouldn’t be able to hide himself under the law.”

Attorney General Janet Reno, who had fought for Sheinbein’s return, said, “We’re disappointed with the response, but at the same time, we’re going to be dedicated to doing everything we can to work with the local prosecutor and with Israeli authorities, if the case is tried there, to see that justice is done.”

Sheinbein claimed citizenship through his father, who was born in British-ruled Palestine before Israel became a country. Under a 1978 law, no Israeli citizen may be extradited.

A State Department official said the department recognized that the decision was made within a responsible judicial system, but added that U.S. officials might recommend that Israel consider amending its extradition law.”

Shinbein was tried in Israel and received a 24 year sentence for a crime that qualified, in Maryland, for the death penalty.

His victim’s family was outraged to learn that Shinbein was eligible for very early parole as the victim was not a Jew and that different sentences apply for Jews who murder Gentiles, even if the crime was committed in the United States.

With nearly one million Israeli passport holders in the United States, 500,000 of them in New York  alone, the threat of giving unrestricted residency and employment access to people who may not be subject to extradition, including untold thousands living in Israel specifically to avoid prosecution for financial crimes, or worse, represents a clear threat to national security.  When “superspy” Jonathan Pollard, responsible to giving the Soviets top US nuclear secrets at the height of the Cold War was offered protection by Israel, it became clear the threat was real.

The case for Abeulazam will, it seems, become less clear as time goes on.  If the Jerusalem Post has its way, tomorrow he will be Muslim, Paksitani and working for Iran.  The families of the dead and injured have questions.  Who put this man on a plane?  What would have happened if he had reached Tel Aviv?  Would he be a national hero like Pollard and the pilots who attacked the USS Liberty?