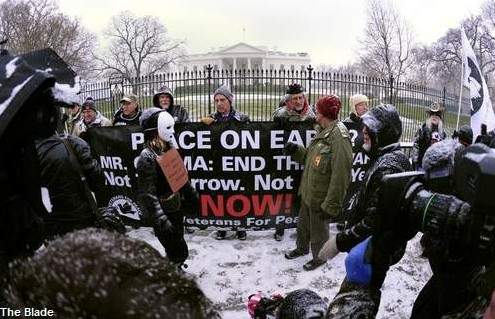 KABUL, Afghanistan — The man who nearly became Toledo’s mayor was in handcuffs two weeks ago outside the White House.

Now the full-time activist is spending 16 days touring “the graveyard of empires,” trying to bring a speedier end to the U.S. presence on Afghan soil.

Speaking with The Blade by phone from Kabul, Mike Ferner, 59, said that starting tonight he will help lead a 24-hour global call-in campaign aimed at raising support for immediately ending the United States and NATO military involvement in the country
.
“If we were truly concerned about the Taliban and al-Qaeda, we would quit doing such a good job of recruiting for them, and that’s exactly what we’re doing now with our tactics,” Ferner said by cell phone from his hotel.

The former Toledo councilman and one-time mayoral candidate disagrees with President Obama’s decision last year to ramp up the military’s counterinsurgency campaign before a July, 2011, deadline to begin drawing down troops. Ferner wants them out now.

“When we pull our troops out, the people of Afghanistan would have to sort things out amongst themselves, and they’re going to have to do that whenever we go, whether that’s in three weeks or 10 years,” said Ferner, a Vietnam-era veteran and president of the national group Veterans for Peace.

The Point Place resident was one of 131 people arrested outside the White House on Dec. 16 while protesting the war in Afghanistan.

The arrest occurred during a Veterans for Peace-sponsored rally. Also handcuffed that day was Daniel Ellsberg, the former military analyst who in 1971 leaked the Pentagon’s secret history of the Vietnam War to the media. Ferner said he was among a group of protesters who refused to step away from a ledge as another group chained themselves to the White House fence. He said he was charged with failure to obey a police officer and has a future court date.

We wanted to make a point that we are very concerned about U.S. policy in Afghanistan and Iraq, and that was the way that we could express our concern in the strongest terms nonviolently,” Ferner said.

Activist and author
The trip is Ferner’s first to Afghanistan, but not his first to a war zone. He visited Iraq twice last decade, the first time on the eve of the 2003 U.S. invasion and again the following year. His observations and interviews with numerous Iraqis were compiled for his 2006 book Inside the Red Zone: A Veteran for Peace Reports from Iraq.

But before his book made it off the press, Ferner was arrested three times for protesting the war. The first arrest in January, 2006, was for spray-painting the anti-war slogans “Troops Out Now!” and “Bye Bush!” on Toledo-area highway bridges.

Two months later, he and other activists were arrested for disrupting a congression­al hearing on war funding by reading the names of soldiers and Iraqis killed in the war. He was arrested again that June while participating in a demonstration at a Veterans Administration medical facility in Chicago.

For the graffiti incident, a Lucas County Common Pleas Court jury found Ferner guilty of felony vandalism and possession of criminal tools. He was sentenced to house arrest for 60 days as well as probation. He also had to wear a monitoring ankle bracelet.

It’s an unlikely rap sheet for a man who once considered entering the priesthood. A 1969 graduate of St. John’s Jesuit High School, Ferner joined the Navy as a hospital corpsman. He was honorably discharged in 1973 as a conscientious objector. He worked as a union organizer in the 1980s and was elected to City Council in 1989 as an independent. In 1993, he dueled Carty Finkbeiner to become Toledo’s first strong mayor, losing by just 702 votes.

He said he has been a full-time activist and writer for the past five years.

A ‘huge blunder’
Afghanistan was commonly seen as the good war for many Americans like President Obama who opposed the Iraq invasion. But Ferner believes both wars were wrong. He said the United States should have treated the Sept. 11, 2001, terrorist attacks as criminal acts and focused on bringing to justice those responsible, rather than invading Afghanistan to root out al-Qaeda.

“Had we done that we could have saved countless numbers of lives and injuries,” he said. “We made a huge blunder by invading Afghanistan.”

While in Washington he visited the Afghan consulate and paid $100 for a visa and filled out a short questionnaire. On Dec. 18 he flew from New York to Moscow then to Dubai, and landed in Kabul Dec. 20.

Ferner said he arrived with six members of the group Voices for Creative Nonviolence. The delegation includes Mary Ann Wright, a former U.S. Army colonel and State Department official who resigned in 2003 over the Iraq invasion. Ms. Wright spoke at the University of Toledo in 2008.

‘Call for Peace’
The highlight of their trip begins at 7:05 p.m. Eastern time today with “‘Dear Afghanistan’: A New Year’s Call for Peace.” The activists are asking people from around the world to call or e-mail them and a group of Afghan youth. Ferner said the activists and youth will describe for callers the situation in Afghanistan.

“We are trying to generate as many phone calls and e-mails as possible from around the world to show that people are supporting the idea of stopping the killing here,” he said.

Ferner said his flight home is Jan. 5. He plans to spend his remaining time in Kabul interviewing Afghans and writing about the experience.

“There’s obviously a good number of people who are getting killed under our bombs, and it seems to me the least we can do is know their names and find out a little bit about their lives,” he said.

Steve Miller, a founding member of the Northwest Ohio Peace Coalition, credits Ferner with doing the right thing in Afghanistan.

“I think anytime you make a human connection like that you accomplish something,” said Mr. Miller, who has demonstrated against the wars in Afghanistan and Iraq. “The effect you have is you present Americans as human beings and you relate to Afghans as human beings too.”

But the Rev. Patrick Rohen, a Toledo-area Catholic priest who is a retired Army captain and former chaplain, said a U.S. pullout from Afghanistan now would be a mistake.

A unique war
“My thing is, we were attacked on Sept. 11 almost 10 years ago,” he said. “This is a war unlike any war we have ever been in before. The mountains there are up to 20,000 feet in that country. You can’t win a war there overnight. We have to stop these people because if we pull out of there unilaterally, the Taliban will take over and we will have a complete chaotic bloodbath like we had before.”

Father Rohen, who served as chaplain at the Ohio Veterans Home in Sandusky, noted that he has met Ferner and “I respect him and I respect his right to do what he’s been doing, but I disagree. As a priest, I disagree with him in the area of social justice. We need to finish this war. I don’t agree with him going over there and protesting.”

For Ferner, getting troops out of Afghanistan is just half the fight. The next battle is getting the United States to pay war reparations to the Afghan people.

“We spent about a trillion dollars tearing the place up, so we ought to be prepared to pay some pretty stiff reparations too,” Ferner said.