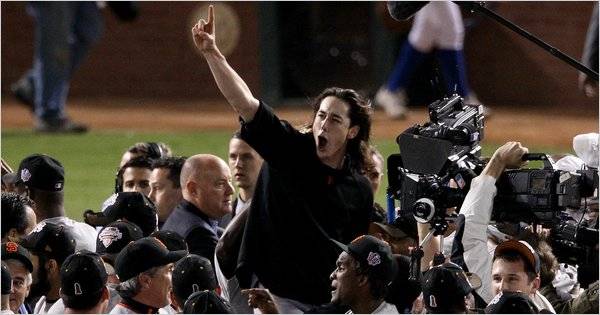 Tim ( The freak ) Lincecum screams to the world that the San Francisco Giants are now number one while striking out ten Ranger’s batters ~ as the Giants humbled the Texas Rangers 3-1 in Arlington, Texas and won the 2010 World Series. Photo/ Paul Moseley, Fort worth Star Telegram

The number one feel good story of 2010 was the over achieving ragtag Band of brothers San Francisco Giants battling their way to the World Series Championship and convincing their long suffering fans, including myself, that torture is sublime: Allen L Roland

11/02/2010 / The curse has been lifted ~ 52 years ago ( 1958 ) the New York Giants packed up their bags and abandoned New York for San Francisco and left millions of East Coast Giant fans in the lurch without their favorite team, which had recently swept the Cleveland Indians in the1954 World Series. New York never forgave them until they finally caved in 2010.

I was elated since I had joined the Navy in 1957, completed my flight training and was stationed in Miramar, California as a Navy carrier pilot and was soon deployed on the USS Ranger ~ which was stationed in Alameda, California across the bay from Candlestick Park and my long time favorite team, the New York but now San Francisco Giants.

It’s been a humbling experience for the past 52 years watching the Giants come so close to a world championship but bow to earthquakes (1989), Dusty baker’s poor judgment (2002) and of course bad luck ~ witness Willie McCovey’s line drive smash into Bobby Richardson’s glove in the last of the ninth, two outs and the tying run on third and winning run on second ( Willie Mays ) in the seventh game of the 1962 World series with the New York Yankees. I was there for that moment and never forgot the heartbreak when over 50,000 screaming fans suddenly went totally silent in shocked disbelief.

But that was the New York curse from 1958 and the Giants were still 48 years from finally breaking it in 2010 ~ but then a ragtag bunch of misfits and castoffs led by a grizzled, wise and veteran coach willed themselves not only to the National league pennant but to the world championship and, in the process, made torture refreshing.

For it was indeed torture to all Giants fans and no one was more adept at applying it then the bearded one ~ their incomparable closer, Brian Wilson.

But in the World Series the Giants suddenly glimpsed their destiny, rose above torture and soared to unparalleled heights by dispatching an obviously awed Texas Ranger team in five games by scoring 29 runs in five games and allowing only 12 runs to the overmatched Texans. This included two shutouts in game two and four as well as a one run gem by Lincecum in the deciding game five.

It appears the Rangers believed their own Fox driven media hype that had established the Rangers as decided favorites while the Giants believed in themselves and savored the fact that were underdogs. As such, America’s team is not the far right and up tight Bush loving Rangers but, instead the rag tag castoffs and supremely intentioned cardiac kids from progressive San Francisco.

So now, names like Lincecum. Cain, Bumgarner, Posey, Ross, Uribe, Torres, Renteria and Huff are added to all time Giants lore along with Willie Mays, Orlando Cepeda, Willie McCovey and Juan Marichal and all is forgiven ~ the 1958 curse has been exorcized.

But, to me, the real hero was manager Bruce Bochy who made his decisive moves brilliantly and never took his foot off the staggering Rangers throat. He and his ragtag team of super achievers truly caught “ lightning in a bottle “ and Ranger’s manager Washington looked like a deer in the headlights of this oncoming truck ~ as did Bobby Cox ( Braves ) and Charlie Manuel ( Phillies ) before him.

So what more appropriate face to symbolize this rise from history’s ashes than the irrepressible Tim Lincecum being hoisted by his teammates after game five and screaming ~ Believe it ! We’re number One !

Allen L Roland is a practicing psychotherapist, author and lecturer who also shares a daily political and social commentary on his weblog www.allenroland.com  and website allenroland.com . He also guest hosts a monthly national radio show TRUTHTALK on www.conscioustalk.net