Home Government Is there a Difference Between Charles Manson and Sarah Palin? 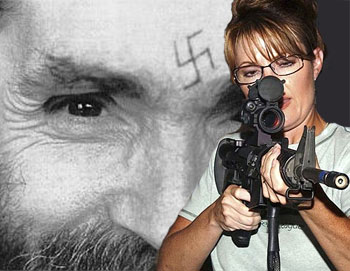 Charles Manson never killed anyone and neither has Sarah Palin!  Of course, that assumes that you define “anyone” as a human being and not an unsuspecting moose who happened to run on the set of a reality show while a gun-totting reality star pulls the trigger just for kicks.

Now with Charles Manson he encouraged others to kill and they did. And he was convicted for what amounts to conspiracy to commit murder.

The question is “Has Sarah Palin encouraged others to commit murder?”

Today, she rejects this notion in a defensive video. She attacks responsible people like me and others who do hold her feet to the fire. She does not like being called out and like a wounded animal, she attacks back. That’s Sarah Palin! We know her now!

Normally, I have no problem with a sophmorish attack to defend an indefensible action. Heck, my teen age children seem to always try to defend themselves when their behavior is exposed as irresponsible. So when they do act poorly, I sit them down slowly and point out the consequences of their actions and then inspire them forward to grow up into responsible adults.

But Mrs. Palin is no teenager. With microphone in hand, she’s much more than just a teenager making a faux paux on a small stage. She’s on a huge stage in front of millions asking us to follow her and doing so without any scruples, remorse, or genuine concern for the peoples who were massacred in Arizona. This is about her and her reputation.

This is beyond outrageous! Worse, it is disrespectful, moronic, foolish, and demonstrates contempt in deed.

I have watched as a many media talking heads and pundits from both sides try to disconnect and temper her responsibility for this massacre against our fellow Americans. Unlike these folks who seem to be afraid of telling it like it is, I won’t oblige because I am a just a working father and not a politician. I am NOT seeking office or trying to get a job on MSNBC or FOX News. I won’t oblige! So hold on to your seats because Mrs. Palin is about to get the “Father Johnny Punish Sit Down and Shut Up While I Read You the Riot Act” lecture that I give to my kids when they misbehave.

Look, Mrs. Palin has given us no reason to respect her as leader. NONE! She quit as Governor of Alaska to pursue profiteering. Now, going for business opportunity is everyone’s right in a free society. However, asking us to empower you with our vote is not a business you can just walk away from. She will never get my vote for this reason. I simply don’t vote for quitters who take my vote and then throw it away when they have no further use for it. Moreover, she has acted like a child with her irresponsible high school attacks on opponents using both visual and verbal hyperbole to incite. Is this leadership?

Really folks! Let’s not apologize for her. Let us hold her responsible for her actions just like we parents do with our kids! Should we approve of our kid putting up a bulls-eye on a opponent who was running for high school class president? For me, the answer is NO WAY! If my child cannot win on ideas with class and dignity, then what’s the point of winning? 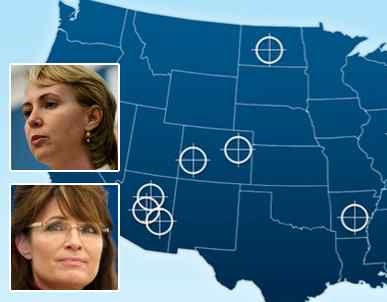 Now Mrs. Palin. could have owned her behavior at which time Americans would forgive. But instead, she attacks and that we cannot forgive. Not at this time and not at this moment.

What she did has consequences. Her ego and ambition notwithstanding, she needs to step aside or be pushed aside by responsible leaders in the GOP and let those who are responsible, qualified, and wise inspire us forward.

America is tiring of people who act with impunity. Our country has suffered badly from this type of irresponsible behavior and it’s costing us everywhere.

For me, Mrs. Palin should be charged with conspiracy to commit murder and tried as an adult. At the very least, the GOP should excuse her from the team and send her home. There is just no room for this type of behavior at the very top of our leadership food chain. It’s over.

So back to the question “Is there a difference between Charles Manson and Sarah Palin?

For me, its’ a resounding Yes!

Charles Manson had direct communication with his assigns influencing them with meetings and mind control. Sara Palin has a microphone and a TV camera that enters the homes of millions. So for me, the real question is “Does having a microphone and TV camera that reaches millions of us daily constitute direct communication and influence?”.  I say yes!  Frankly, I believe it is even more direct and influential. What say you?