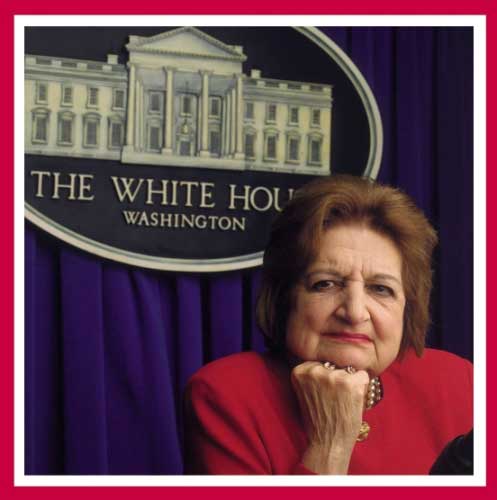 This time, she’s under attack from the Society of Professional Journalists [SPJ] which is preparing to retire a lifetime achievement award. War-all-the-time attacks waged by militaristic Zionists continue as the consequence of speaking truth to a war culture becomes clear.

The so-called “Society of Professional Journalists” is at it again, undermining the work of truly professional journalists. In the 1990s, SPJ joined in the pack attack against investigative reporter Gary Webb; now, the SPJ’s target is Helen Thomas.

In 1996, working at the San Jose Mercury News, Webb courageously brought the Reagan administration’s Contra-cocaine scandal back to public attention, only to face relentless attacks from the major news outlets that had hid from the difficult story in the 1980s.

Before those attacks grew too fierce, California’s SPJ chapter had given an award to Webb for his series. But after the New York Times, Washington Post and Los Angeles Times piled on against Webb, his Mercury Newseditor Jerry Ceppos panicked and forced Webb to quit.

The national SPJ wanted desperately to side with the big newspapers in taking down Webb, so it pressured its California chapter to withdraw Webb’s award, a step that the state chapter refused to take.

So, to do its part in the humiliation of Gary Webb, the national SPJ bestowed a special “ethics in journalism” award on Ceppos for his role in destroying Webb’s career, an act that ultimately contributed to Webb’s suicide in 2004.

SPJ’s action was professional journalism turned upside down, honoring a cowardly editor for selling out a courageous reporter.

Apparently, SPJ never had any regrets over its role in helping to ruin Webb, not even after the CIA’s inspector general issued a report revealing that the Contra cocaine trafficking was actually worse than Webb had described.

Now, SPJ is considering a similarly gutless betrayal of legendary White House correspondent Helen Thomas as she faces relentless attacks from Washington’s powerful neocons who have long considered her a thorn in their side, as Danny Schechter describes in this guest essay:

The Society of Professional Journalists [SPJ] is preparing to jump on the “kick Helen Thomas when she is down” campaign by retiring a lifetime achievement award that honors this great American journalist.

She is being sanctioned for speaking out against Israel in a manner that offended some, despite her clarification.

This new, knee-jerk, self-righteous “look how responsible we are” capitulation to outside pressure must be resisted.

A fellow Detroiter, former editor and media executive, Lloyd H. Weston, is challenging his fellow SPJ members to support Helen and has backed her in a letter to Editor & Publisher magazine.

He wrote the following to SPJ’s Executive Committee which has now postponed its decision for ten days by referring the decision to their whole board. He writes in part:

“Distinguished Members of the Executive Committee:

“Allow me to introduce myself in the context of this serious, important and, to me, disturbing issue that is on your agenda for the January 8, 2011 meeting of your committee.

“My name is Lloyd H Weston and I am one of you. I have been a journalist and a newspaperman for at least 50 of my 68 years of life. In junior high school I learned to set type, manually, one letter at a time, and how to use a hand printing press.

“Today, I am teaching myself the ‘magic’ of transposing newspapers and magazines onto iPads.

“In between, I joined this beloved organization in the early 1960s, becoming president of the Wayne State University chapter of Sigma Delta Chi and graduating with a degree in journalism and an SDX key in 1964.

“Until I moved to Chicago I was a member of the Detroit Professional Chapter, and am now a member and past-director of the Chicago Headline Club.

“I have been a reporter, editor, publisher and newspaper owner, most recently (like so many of our colleagues these days) involuntarily retired from the Chicago Sun-Times News Group and Pioneer Press Newspapers.

“I have been active in synagogues, B’nai B’rith and other Jewish organizations all my life, and I have been a reporter for both The Chicago Jewish News and The Forward newspaper.

“Never once in my entire career – until about a month ago – have I felt any sense of conflict between Judaism and Journalism. I have since – in my own mind and through this and other letters I have written in the last few weeks – concluded – as I have really known all my life – that there is no conflict.

“Ask me to show you two people in the entire world who cherish freedom more than life itself, and I will show you an American Jew and an American Journalist!

“Giving a nod to full disclosure, let me say that I have been – and remain – a fan of Helen Thomas since I watched those 1960s JFK press conferences in college. But I did not actually meet Helen until I ran into her one day in the Press Compound at the Democratic National Convention in Boston in 2004.

“I introduced myself as a fellow WSU alumnus. She hugged me and we chatted briefly. I could not have been more delighted than a teenage girl meeting her favorite rock star.

“The next and last time I saw Helen was a few years later at a book signing in the Chicago area… a meeting which gravely saddened me at how old and feeble [she was very hard of hearing] she had become in such a short time.

“Let me add that, a couple of weeks ago I did receive a complimentary e-mail from Helen’s nephew, whom I have never met. I have not, however, communicated with Helen in any way, or heard from her, since that book signing, nor do I expect to.

“I no more believe that Helen Thomas is an anti-Semite than I believe in Santa Claus or the Easter Bunny. But the issue before you this week has nothing to do with anti-Semitism.

“The only issue on your table today is whether SPJ stands for the unabridged right of any journalist – any American – to speak his or her opinion, on any subject, without fear of punishment or retribution from any government, individual, private or professional organization.

“To remove Helen Thomas’ name from the SPJ Lifetime Achievement Award, I believe, would constitute such dire abridgement, punishment and retribution.”

I, for one, will return an award I received from the SPJ for investigative journalism if they go ahead with this disgraceful decision, and I will appeal to other colleagues who have been honored by the SPJ to do the same.

Rather than have this Board – hardly representative of all journalists – pronounce on Helen Thomas’s integrity, I would suggest a referendum open to all journalists and slightly broader.

Let’s ask America’s journalists if they sided with Helen Thomas when, practically alone, and when it mattered, she challenged the claims of the Bush White House on WMDs or now back Ari Fleisher, the then Press Secretary, who has called for these sanctions against the far more honest and gutsy Thomas?

How many journalists are proud of way mainstream journalism became another kind of SPJ in that period – a SOCIETY OF PROFESSIONAL JINGOISTS?

In the event, you forgot how groveling and sycophantic so many media outlets were during the invasion of Iraq, consult the many books that have documented this outrage including my Embedded (Prometheus Books, 2003)  and When News Lies: Media Complicity And The Iraq War. (Select Books, 2006).

Or you might want to watch my film, “WMD: Weapons of Mass Deception,” that shows and documents a journalistic capitulation that would do Joe Stalin proud.

How many journalists today believe that journalists are somehow forbidden from having opinions on the settlement practices in Israel that have been condemned for years by UN resolutions and editorials in newspapers throughout the world?

Have we lost that “decent respect for the opinions of mankind” called for in our Declaration of Independence?

Are we only allowed to believe and parrot the views of the Israeli government with its super thin majority, or the powerful Lobby it coordinates and helps fund?

Why all the silence?

Contrast our “journalism” on this subject with what appears in the media worldwide.

Who will history honor, the likes of Judith Miller or Helen Thomas?

William Shanley, who is making a film about Helen’s career, commented:

“Pathetic. America has become a country in which a thief is on the cover of Time Magazine, the Golden Rule is under the boot of empire, and the truth about the illegal occupation of Palestine, the theft of land and the mass incarceration of its people, cannot pass lips.”

The other point is that Helen is now a commentator and has been for ten years which frees her from “objectivity.”

And where was the SPJ when CNN Walter Isaacson ordered newsrooms to not show the effects of U.S. bombing in Afghanistan? Did the SPJ speak out against this outrageous suspension of standard journalistic practice?”

Let the SPJ know how you feel about this continuing persecution of Helen Thomas. Call Hagit Limor, SPJ President at 513-852-4012, or write [email protected] .

Speak up now so that all the Helen Thomases of the world can speak up and speak out without fear and retribution.

[For more on this topic, see Consortiumnews.com’s “The US Media Hit on Helen Thomas.”]

News Dissector Danny Schechter is editor of Mediachannel.org. Your comments are welcome to [email protected]