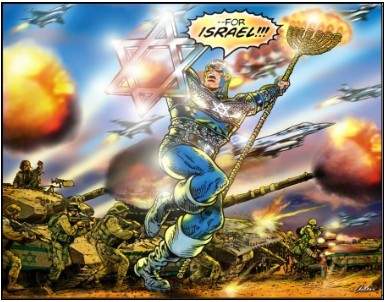 Update: Jerusalem Post says:  [C]omic book artist Eli Valley [says this portrayal works] as a sort of parody of the image of the ‘new Israeli Jew’ vs the sickly, state-less Diaspora Jew. … Valley said he had no problem with comics being used for politics, calling them ‘an amazing medium’ and citing the long history of comic books in political and ideological campaigns against communism, Nazis, drugs, crime and a vast array of other issues.”

No comment from the Post yet on the same “new Israeli Jew” site targeting the Free Gaza Movement peace activists who were massacred in international waters last May, and then called “pirates” by Israel which demanded the murdered and surviving peace activsts be “investigated.” The Post article also omits mention of the portrayal of  Palestinians and human rights activists as Vermin, a classic NAZI propaganda tactic used to dehumanize perceived enemies. See article below by Cecilie Surasky in MuzzleWatch, after Gilad Atzmon’s excellent piece.

“I really want to know, once and for all,  where Zionism ends and Jewishness starts?”

It has become pretty obvious that that Israelis and Zionists do not try to disguise their morbidity anymore.  Zionism is clearly a threat to humanity and humanism.

Airplanes and tanks, decorated with Jewish symbols, are consigned to spread death and carnage in the name of the Jewish people.
Captain Israel, a kosher superman, is holding a Menorah torch. He is there to set the entire region on fire.

Israelis and Zionists are proud of their pathological, murderous intentions. They are a threat not just to their neighbors, but  to humanism and humanity in general.

Unlike the naive,  idealist and humanist  Superman who steps in to attack and terrorize wife beaters, profiteers, a lynch mob and gangsters, the kosher Super man is far from being naive. He is an ethnic cleanser, murderous and politically indoctrinated. He is there to save one people only namely the ‘chosen tribe’.

Here is what the SupperJews’ Website says about its kosher characters.

“Led by the fearsome Captain Israel and the fiery Beth El, Team SuperJews is a group of everyday people who rise to action when help is needed.  Uniquely talented yet collectively strong, Team SuperJews unites whenever new or recurring threats endanger the Jewish community.”

According to SupperJews’ Website the following Jewish organisations are affiliated with the  project.

I really want to know, once and for all,  where Zionism ends and Jewishness starts?

Israel’s slide into fascism continues as propaganda looks more and more racist and NAZI-like in its portrayal of human beings (the wrong kind of human beings) as vermin. This is vile and repulsive stuff, typical of our Zionist friends

By Cecilie Surasky in MuzzleWatch

StandWithUs has a new supremacist celebration of militant Jewish nationalism and masculinity children’s comic book featuring Captain Israel, who I think we can all agree looks mighty fine in a sparkly silver body suit with matching rhinestone belt and shamelessly appropriated Jewish religious symbols. StandWithUs is on the openly racist endof the mainstream Jewish institutional world. And they’ve given us a new version of an old story-the New Zionist Man (To understand this propaganda in its proper historical context, see below for explanatory text about early Zionism,  Jewish masculinity and Orientalism.)

But it gets better. Perfect, shining Captain Israel needs a diseased, less than human “other” to give him his all-man mojo. Episode 2 will feature Captain Israel’s undoubtedly victorious epic battle against “the venomous” Boycotts, Divestment and Sanctions movement. (See image below.)

I wondered what it was about the evil serpent-the colors of the Palestinian flag- that looked so familiar to me?  Where on earth did they get the inspiration to portray the Palestinian and international human rights groups that support the BDS movement as a big, fanged, serpent? As vermin? (And then I remembered I had seen it in different (Genesis inspired) anti-Semitic propaganda about ‘conniving’ Jews, and thought, why not just call them all  “cockroaches” and get it over with? )

A comic book for children, this is really beyond muzzling.  This is about preparing for eradication.

Let’s see how long we have to wait before they get called out by the mainstream Jewish organizations they partner with. Paging Abe Foxman and The Anti-Defamation League. Paging David Harris of the AJC. Paging the Jewish Federations of North America. These people, StandWithUs, call themselves educators. They are educating your children. Our children. As history has shown, and as we Jews know too well, this kind of dehumanization-comparing people to vermin- should never, ever be acceptable. 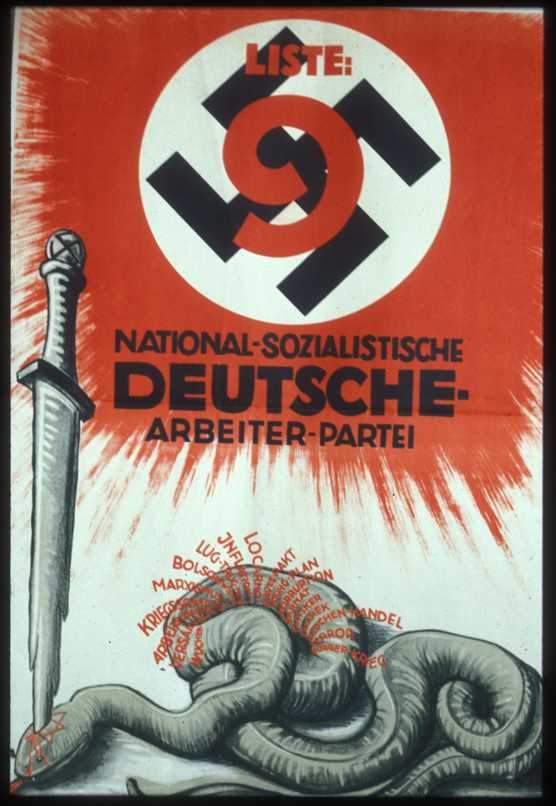 The poster [at left]?

And for a little background on early Zionism to give you some tools for appreciating what a throwback  Captain Israel really is. From Raz Yosef of Tel Aviv University’s book, Beyond Flesh:

Zionism was not only a political and ideological program but also a sexual one. The liberation of Jews and creation of a new nation were closely intertwined with a longing for the redemption and normalization of the Jewish male body. That body had to be rescued from anti-Semitic, scientific-medical discourse associating it with disease, madness, degeneracy, sexual perversity, and femininity even with homosexuality. The Zionist movement was intent on transforming the very nature of European Jewish masculinity as it had existed in the diaspora. Zionist/Israeli films expressed this desire through visual and narrative tropes, enforcing the image of the hypermasculine, colonialist-explorer and militaristic nation-builder, an image dependent on the homophobic repudiation of the “feminine” within men.

The creation of a new heterosexual Jewish man was further intertwined with attitudes on the breeding of children, bodily hygiene, racial improvement, and Orientalist perspectives which associated the East, and especially Eastern bodies, with unsanitary practices, plagues, disease, and sexual perversity. By stigmatizing Israels Eastern populations as agents of death and degeneration, Zionism created internal biologized enemies, against whom the Zionist society had to defend itself. In the name of securing the life and reproduction of the new Ashkenazi Jewry, Israeli society discriminated against both its internal enemies, the Palestinians, and its own citizens, the Mizrahim (Oriental Jews).