One of the nation’s biggest banks — JP Morgan Chase — admits it has overcharged several thousand military families for their mortgages, including families of troops fighting in Afghanistan. The bank also tells NBC News that it improperly foreclosed on more than a dozen military families.

The admissions are an outgrowth of a lawsuit filed by Marine Capt. Jonathan Rowles. Rowles is the backseat pilot of an F/A 18 Delta fighter jet and has served the nation as a Marine for five years. He and his wife, Julia, say they’ve been battling Chase almost that long.

The dispute apparently caused the bank to review its handling of all mortgages involving active-duty military personnel. Under a law known as the Servicemembers Civil Relief Act (SCRA), active-duty troops generally get their mortgage interest rates lowered to 6 percent and are protected from foreclosure. Chase now appears to have repeatedly violated that law, which is designed to protect troops and their families from financial stress while they’re in harm’s way.

A Chase official told NBC News that some 4,000 troops may have been overcharged. What’s more, the bank discovered it improperly foreclosed on the homes of 14 military families.

“We are deeply appreciative of those who fight to protect our country and Chase funds a number of programs that provide benefits to military personnel and veterans, and while any customer mistake is regrettable, we feel particularly badly about the mistakes we made here,” Chase chief communications officer Kristin Lemkau said in a statement to NBC News.

She said that beginning this week Chase will be mailing a total of about $2 million in refunds to families that may have been overcharged. She says most of the families improperly foreclosed on have gotten or will get their homes back. A bank official described what happened here as “grim,” but emphasized the mistakes were inadvertent, not malicious.

The news comes as millions of Americans are struggling to keep their homes. Banks have come under fire for allegedly improperly foreclosing on homes across the country.
JP Morgan Chase had over $2.14 trillion in total assets as of September, second only to Bank of America Corp., which had $2.34 trillion.

The overcharges may never have come to light but for Rowles, 31, and his wife, Julia.

“It’s been a nightmare. It’s been my living nightmare,” Julia Rowles said of her experience with Chase, in an interview with NBC News in Beaufort, S.C.

The saga began in 2006 when Rowles went on active duty. Under the SCRA, he could get his mortgage interest rate, which was adjustable and rising, lowered to 6 percent.

But Chase took a few months to lower Rowles’ rate, overcharging the family, Rowles says, by as much as $900 a month. In the fall of 2006, Chase finally began charging Rowles the correct 6 percent rate. For the next year or so, everything went relatively smoothly.

Then, two years ago, the Rowles family says, Chase began hitting them with collection calls that escalated to sometimes three a day, claiming they owed as much as $15,000.

“Saturday, Sundays, middle of the night. It did not matter if it was a holiday,” Julia said. “Collection calls at 3 in the morning. He would state, “I’m in California. I’m stationed here in Miramar. It’s 3 in the morning. What are you doing calling me?” “Well, sir, this is an attempt to collect a debt.” 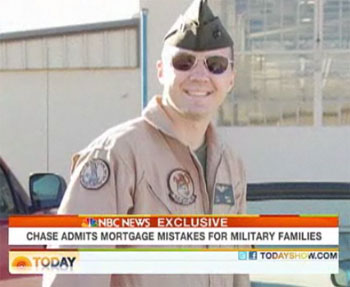 She said they threatened to take the house and report the family to a credit agency, even though the Rowles family didn’t owe the bank anything and never missed a payment.

The Rowles’ records show that while they kept making payments on their mortgage at 6 percent, the bank wrongly had been charging them at rates above 9 or 10 percent. They kept calling the bank to explain there had been a huge mistake but say no one would listen. They say they kept being harassed for money they did not owe.

Fed up, Capt. Rowles got a lawyer and sued Chase, for himself and other members of the military.

“They ought to only have to worry about fighting the fight and keeping alive, not about whether their wives and children and going to be put out on the street,” said Dick Harpootlian, an attorney for the Rowles family.

The lawsuit is still pending. But a Chase official now tells NBC that Rowles did everything right, and the bank did a lot wrong. (The bank maintains, however, that it previously refunded the initial overcharges of the Rowles family. The couple disputes that.)

“We made mistakes here and we are fixing them,” said Chase spokeswoman Lemkau.

“We now have a dedicated team in place devoted to servicing home loans for military personnel —the members of our military deserve nothing less. We welcome the opportunity to talk to Captain Rowles and others who would like to discuss their accounts,” she added.

To read a statement from JP Morgan Chase about this NBC News investigation, click here .