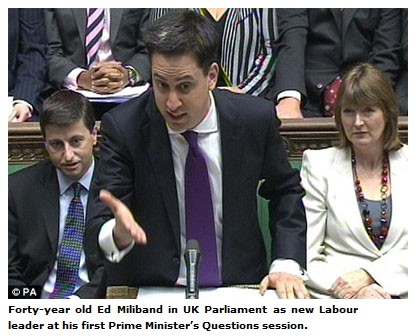 by Joshua Blakeney for VT

Canadian-based scholar and journalist Joshua Blakeney is prepared to gamble on U.K. opposition leader Ed Miliband emerging as the first western political figure to resist the Zionist meat grinding machine. Ironically, Miliband is the first Labour Party leader of Jewish upbringing and the first one to publicly advocate for a foreign policy built on “values, not just alliances”.

In recent years I have come to view most politicians as merely being puppets and knaves for various oligarchic factions of the ruling class. The Zionist faction of the oligarchy is among the most adept at manufacturing politicians to blindly support its criminal agenda of war and displacement with the ultimate goal of establishing a Greater Israel in the Middle East. I am unwilling however to become totally cynical and disenchanted with parliamentary politics. The fact remains that who becomes the leader of a country like Britain or Canada could mean the difference between life and death for many Arab and Muslim people. I am willing to risk being called naive and foolish years from now by saying that I think the recently elected leader of the UK’s Labour Party, Ed Miliband, offers some modicum of hope – vis-à-vis the Israeli/Palestine conflict – when one compares him with all the other disreputable party leaders in the Imperialist Block (i.e. the U.S., Israel, Canada, UK, and Australia).

Ed Miliband is the son of two highly progressive, anti-imperialist Jewish survivors of the Nazi holocaust. This fact should not be taken lightly. His mother Marion Kozak survived WWII hiding out in Nazi occupied Poland and his father Ralph Miliband fled Nazi occupied Belgium for London in 1940. Marion’s father and other relatives perished in Auschwitz. Thus, genocide and human rights abuses are not abstractions for the family of the likely future Prime Minister of Britain. Rather than seek retribution for the Nazi crimes against Jews by blindly supporting colonization and genocide in Palestine, Marion Kozak is a supporter of UK based groups such as Independent Jewish Voices and Jews for Justice in Palestine [1]. Hence, being Jewish and pro-Palestinian will not necessarily appear untenable or alien to the recently elected leader of Labour.

Ed’s father Ralph Miliband was so distinguished a political theorist on the Marxist left in his heyday that he was buried in Highgate cemetery within meters of Karl Marx’s grave [2]. Miliband senior, like his wife, had impeccable anti-imperialist and (despite a brief spell in the Hashomer Hatzair, a left-wing Zionist group at age 15) [3] internationalist credentials. In contrast to most politicians who probably have never read a single book or journal article on the Israel/Palestine conflict – and who just parrot speeches and follow directives written by Zionist influenced PR firms – Ed Miliband comes from a family where such literature would undoubtedly have been contemplated and debated vigorously.

Ed and his brother David Miliband grew up in the famous family home in North London – which one BBC journalist characterized as “a kind of socialist-Marxist salon” – with anti-racist, anti-apartheid leaders such as South Africa’s Joe Slovo frequently sitting round the dinner table discussing politics.

Ed, in a previous incarnation, worked as the assistant to the legendary Tony Benn MP who, as the incumbent president of the Stop the War Coalition, is an outspoken opponent of Zionist crimes against humanity and the 9/11 wars in general. Benn memorably read out an appeal phone number for the victims of the 2008/2009 Gaza Massacre live on BBC, defying a ban imposed by the BBC on such appeals for Gazans [4].

Furthermore, unlike many of the Blairites, Ed Miliband is not a member of the notorious “Labour Friends of Israel” and neither is his brother David Miliband. One of the leading directors of “Labour Friends of Israel” backed David rather than Ed during the recent leadership race which saw the two brothers lock horns with Ed emerging victorious in a surprise victory over his brother. Reports this week suggest that the “Labour friends of Israel” under pressure from unions sympathetic to BDS, some of whom endorsed Ed Miliband’s leadership bid, will now embrace the slogan “Working Towards a Two-Sate Solution” as its credo [5]. Perhaps this is just semantics and the same old policies of blind support for Israel will continue to characterize Labour’s Middle East policy. But certainly this ostensible shift in emphasis since Ed Miliband took control of the helm is worth taking stock of. Haaretz reported “Ed Miliband…raised suspicions [among Zionists] when [he] refused to fire an important campaign worker who had participated in anti-Israel activity in the past. The fact that he was elected with the help of the unions, most of whose members support a boycott of Israel, confirms that at least in regards to support for Israel, the Blair-Brown era is definitely over.” [6]

Ed Miliband, as would be expected, maintains that he was opposed to Blair’s wars all along. Although we should take such sentiments with a pinch of salt, they are not totally fanciful. The New Statesman’s Mehdi Hasan reported that “a close friend and former colleague of Ed Miliband tells me that he has no doubt whatsoever that the [former] shadow energy secretary opposed the invasion of Iraq in March 2003. “I know for a fact that he was against the war because it was he who persuaded me of the merits of the anti-war case,” says the friend. “I remember flying out to Cambridge [Massachusetts], where he was on a sabbatical lecturing at Harvard, and he argued very strongly that the UN weapons inspectors should be given more time to finish their work.” ” Ed Miliband reportedly “rang Gordon Brown from the United States to persuade the then chancellor of the exchequer to resist the drumbeat for war coming from inside No 10.” At the 2010 Annual Labour Party Conference Ed Miliband reflected on the Iraq debacle “I do believe that we were wrong. Wrong to take Britain to war and we need to be honest about that.” [7]

Although I am opposed to the assumption of many on the left that criticism of Israel should where possible be ethnicized (as James Petras has observed “Committed Zionists…dismiss Jewish and non-Jewish critics with equal ferocity” [8]), it does remain a fact that as a political leader of Jewish ethnicity, Ed Miliband would be harder to smear and characterize as an anti-Semite were he to attempt to rethink Britain’s subservient policy towards Israel. Plus, he might be in a better position than previous leaders to see the strife Israel imposes on those many Jews who wish to see themselves as Brits first and foremost but who find themselves pestered by Zionist operatives to show allegiance to a misanthropic foreign power.

In his acclaimed 2009 exposé entitled “Inside Britain’s Israel Lobby”, Britain’s Channel 4 journalist Peter Oborne reported that some British MPs were too scared to comment on camera about the power of what one Tory MP labeled “the biggest lobby in Westminster” [9]. Another frontbench MP asked Oborne to remove the batteries from his mobile phone in case they were being bugged (presumably by Mossad). One could imagine, or at least hope, that Ed Miliband would be in a freer position than most fear-struck non-Jewish politicians to posit criticism of Israel.

I’m not a betting man and if I were I would not put much money on Ed Miliband being egregiously different to any of the other disempowered politicians who preside over largely impotent and discredited parliaments. Nevertheless when compared with the likes of Jason Kenney, Stephen Harper in Canada and previously Tony Blair and Gordon Brown in Britain, Ed Miliband seems to be by far the most uniquely positioned of the leaders of the mainstream political parties in the Imperialist Block to defy the dictates of Israel.

[2] Ralph Miliband’s most influential book Parliamentary Socialism: A Study in the Politics of Labour (1972) accurately predicted that the Labour Party and parliament would fail to emancipate the working class and achieve socialism, in effect predicting the metamorphosis of the Labour Party into New Labour.

[4] Youtube: Tony Benn to BBC “If you wont broadcast the Gaza appeal then I will myself”.

“Zionism is the winner in British elections“, by Stuart Littlewood, Voltaire Network 13 May 2010.