The ACLU of Washington filed suit on behalf of the Seattle Mideast Awareness Campaign, seeking a preliminary injunction to uphold the Campaign’s free speech rights to publish a paid bus ad expressing its views on actions of the Israeli government.  Filed in U.S. District Court in Seattle, the lawsuit says that King County’s refusal to allow the ad on Metro buses violated the Campaign’s First Amendment rights. 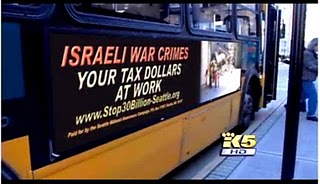 “In a free and democratic society, we cannot allow the government to suppress lawful speech, even speech that may stir emotions. Chipping away at fundamental free speech rights is not the answer,” said Kathleen Taylor, ACLU of Washington executive director. “We should keep in mind that mild speech doesn’t need protection. It is when we are faced with controversial speech, speech that is intensely upsetting to some people, that our adherence to the First Amendment is most important,” added Taylor.

The Seattle Mideast Awareness Campaign (SeaMAC), a nonprofit grassroots organization that seeks to educate the public about U.S. policy on the Israel-Palestinian conflict, intended to place a paid advertisement on the outside of King County Metro buses. The ad’s text read “Israeli War Crimes: Your Tax Dollars at Work.”

SeaMAC submitted the ad on Oct.15, 2010 to Titan Outdoor LLC, the company that handles advertising on Metro buses. Titan informed SeaMAC on Nov.10 that the ad had been approved and accepted for placement on Metro buses.  SeaMAC signed a contract on Dec.13 to run the ad and paid Titan the following day. SeaMAC paid for the printing of the ad, which was delivered to King County on Dec.17. The ad was scheduled to run on 12 Metro buses for four weeks, beginning on Dec. 27.

King County has a long-established practice of publishing on its buses a wide variety and spectrum of ads containing non-commercial speech. For example, paid ads related to the conflict between Israelis and Palestinians in Gaza previously have run on Metro buses, as have ads with atheist messages. The SeaMAC ad was submitted and approved under King County’s written Advertising Policy concerning its practices and procedures of placing paid ads on buses.

The prospect of the ad generated an outpouring of strong opposition.  On December 23, King County issued a press release announcing that the county now would not permit the ad to run. The county also announced that its existing Advertising Policy was no longer in effect and that it was immediately implementing a new interim policy. Later that day Titan formally notified SeaMAC that the previously accepted ad had been cancelled.

The lawsuit seeks a court declaration that King County’s decision not to publish the ad violates the First Amendment and a preliminary injunction against King County and an order that it publish the ad, as originally promised.