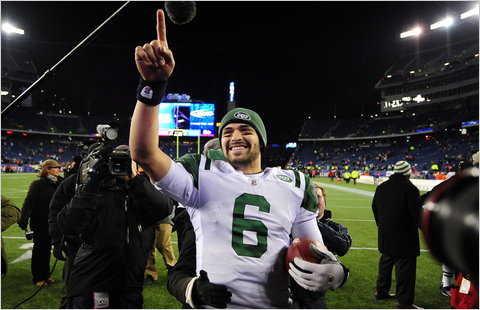 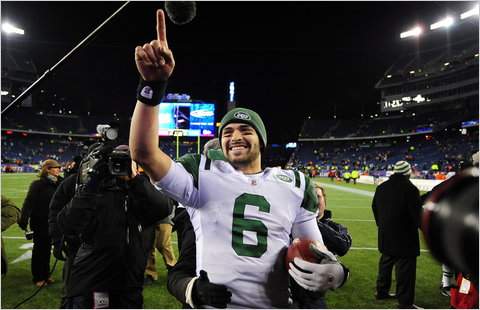 Mark Sanchez after the Jets defeated the Patriots last Sunday to reach the A.F.C. championship game.

OK, there’s a lot going on with Obama cementing his marriage with Wall Street with the appointment of Bill Daly as his New chief of Staff and appointing General Electric CEO Jeff Immelt as the head of the President’s Council on Jobs and Competitiveness which also cements Obama’s on going relationship with the military/Industrial complex.

This is also a signal that Obama sees his new base as the financial elite or corpocracy because both Daly and Immelt will play key fundraising roles in the upcoming 2012 presidential campaign ~ Main Street and progressives be damned.

Of course, Keith Olbermann saw the handwriting on the wall since GE owns Comcast, MSNBC and NBC and took his popular progressive voice of dissent from MSNBC to the Internet ~ the last bastion of the truth.

But I digress, for all of that is certainly newsworthy but tomorrow is super Sunday where we have two NFL must see championship games with far less distracting pregame hype which often passes for programming with the Super Bowl.

Super Sunday is for true football fans and it’s played in Chicago and Pittsburg under brutal weather conditions. Its the final four literally fighting it out for a chance to play in the hyped up Super Bowl two weeks later in a highly commercialized air conditioned Cowboy stadium in Arlington,Texas ~ where most of the nation will watch the million dollar a minute commercials and study their super bowl pool bets after every quarter ( and constant time outs ) to see if they won the big bucks. We’re talking Super Bowl lottery here!

By that time the passion of super Sunday will have diminished into super hype where the only fight left is between corporations to get the biggest bang for their commercial buck while the final two find themselves buried under PR confetti while vainly trying to keep their game faces for a game that has become a happening ~ and they are not really the main event.

But now back to the must watch Super Sunday, January 23rd where the Green Bay packers take on the Chicago Bears in the early game and the New York Jets battle with the Pittsburg Steelers in the late game.

I’m picking the two number six seeds ( Packers and Jets ) to win on the road at respectively Chicago and Pittsburg and here’s why;

1.    The Packers and Jets are battle tested and are peaking at the exact right time and are both excellent road teams.

2.    The Steelers are banged up from their intense battle with Baltimore last weekend and are getting old.

3.    Chicago essentially had a bye last week with Seattle and will have a hard time matching up with a focused Packer team with a hot Aaron Rodgers at the helm.

4.    The Jets Santonio Holmes is the ultimate clutch receiver and he has something to prove against the Steelers who traded him two years ago after he caught the Super Bowl winning pass in the last minute against the Arizona Cardinals.

In summary, the Jets and Packers will prevail on Sunday and the Jets ( who are no strangers to major hype and distractions ) will prevail over the Packers in the aftermath of Super Sunday ~ which is also called the Super Bowl while Jimmy Jones entertains an aging George W Bush upstairs in the owners box and the world groans in unison.