Home World Report: A 2010 visit to the Occupied West Bank as a human... 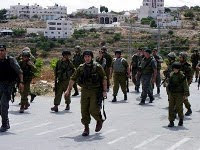 During April, May and June of 2010 I traveled to the Occupied West Bank (also known as the Occupied Palestinian Territories). I wished to observe at first-hand the effects that the Israeli military occupation, then entering its 43rd year, was having on the indigenous Palestinian inhabitants, their institutions, their businesses and their daily lives.

Entry to the occupied territories is problematical. Visitors hoping to enter via air, at Ben Gurion airport in Israel, or by land across the Jisr Malik Hussein (formerly known as the Allenby Bridge) from Jordan are subjected to intensive scrutiny by Israeli border authorities. Anyone stating their wish to visit Palestinian areas – as distinct from Israel proper – is denied entry as a matter of routine. It is therefore necessary to conceal one’s intentions in order to gain a visitor’s visa. (It should be mentioned that NGO personnel, such as Red Cross and other humanitarian workers who wish to operate in the occupied territories, are now denied work permits by the Israeli authorities. They may be granted three month visitor’s visas.)

While in the West Bank I volunteered my services with two local human rights organizations: the International Solidarity Movement (ISM) is a Palestinian-led entity, dedicated to non-violent methods of support for people suffering under the Occupation; the Palestine Solidarity Project (PSP), based in the village of Beit Ummar, south of Bethlehem, concentrates on supporting villages in the area which are under threat from nearby Jewish settlement/colonies and the Israeli Occupation Force – the so-called Israel Defence Force.

My activities took me from farmers’ encampments in the South Hebron Hills, to major cities such as Hebron, Ramallah and Nablus, as well as to many other villages and towns. I visited the Jordan Valley, most of which is now a closed military zone, and spent some time in East Jerusalem in the beleaguered suburb of Sheikh Jarrah. I spoke to university lecturers, students, small businessmen and traders, artists, labourers, farmers and activists, the employed and the unemployed, the young and the old. At the end I came away with a reasonably comprehensive picture of what life is like for Palestinians living under military occupation.

The underlying mood is one of resignation, if not despair. The economy, under the Israeli stranglehold, is in tatters. Emigration seems the only hope for many young people, faced with few if any job prospects (e.g. I spoke with a young man, holder of a degree in chemical engineering from Ankara University – undertaken at great expense to his family – who survives by operating a fruit stand in the Nablus market. His case is not untypical.) Having endured 43 years of military occupation, with no end in sight, people wonder why Israel is not made to comply with United Nations resolutions calling for its withdrawal, and why its actions are supported by Western powers. They feel abandoned. Nevertheless, most maintain an attitude of sumoud, steadfastness, believing that “to exist is to resist”.

In addition to merely observing the situation, I took it upon myself to document and report human rights abuses suffered by Palestinians at the hands of Jewish settlers and the Israeli Defence (sic) Force. Amongst the more notable of these were:

• The near-total destruction by arson of the mosque in the village of Al Lubban as Sharqiya during a night-time incursion by settlers from the nearby colony of Bet El.
• The murder of two young girls, Maasa (5) and Janaa (8) Emad
in the Jordan Valley, deliberately and repeatedly run over by a jeep driven by an IDF soldier.
• The savage and unprovoked beating of an elderly farm labourer, by IDF soldiers, at the Hamra checkpoint in the Jordan Valley.
• The killing of Bassem Abu Rahma, shot with a teargas canister at close range while passively observing a demonstration at the village of Bil’in.
(I attended at the anniversary of his murder.)
• The bulldozing and total destruction of a newly-completed family home near the village of Haris by order of the Israeli military occupation authority. The family joins the 50,000 people made homeless by such demolitions since 1967.
• The expulsion of the Ghawe and Al Kurd families by Jewish settlers, aided by Israeli police, from their homes in the Sheikh Jarrah neighbourhood of East Jerusalem.
• The arrest and beating while in detention of three female human rights activists from the ISM at Sheikh Jarrah.
• Ongoing protests at the village of Iraq Burin against the shooting deaths of two teenage boys by IDF soldiers during a raid into their village and the ongoing theft of village lands by the nearby Bracha settlement.
• The blinding of Emily Henochowicz, a young Jewish activist from the USA, shot at close range by an IDF soldier while attending a protest demonstration at the Qalandiya checkpoint.

These were just some of the incidents I investigated and reported upon. They are not particularly notable in the everyday, ongoing and systematic violation of the human and civil rights of Palestinians. They are set against a backdrop of land thefts, house demolitions, destruction of property, restriction of movement, arbitrary arrests, torture while in confinement, and constant harassment and humiliation, which are everyday occurrences in this tragic land. Targeted assassinations, used on occasion, are still part of the Israeli government’s repressive tactics.

Regular protests against land appropriations for the Apartheid Wall and by individual settlements are organized in a number of villages: Bil’in, Na’lin, Iraq Burin, Wadi Rahhal, Beit Ummar, Beit Jala, Qaramat Bani Hassan, Buderus, An Nabi Saleh and Al Masara all hold weekly protest demonstrations. Despite a rising incidence of arrests, wounding from live ammunition, beatings, gas inhalation and deaths the villagers, accompanied by foreign nationals and concerned Israelis, maintain their protests. I attended each of these village protests at least once in order to lend my support and to report what I saw.

Having voted Hamas into power in the West Bank and Gaza in the last democratic elections (overseen by US and international observers), held in 2006, the Palestinian people are still governed by the Palestine Authority (PA), which, in reality, is synonymous with Fatah. Fatah and its affiliates, of course, refused to relinquish power after the elections. The PA is widely regarded in the West Bank as the sub-contractor for implementing Israel’s policies and I heard it described, more than once, as “a second Occupation”. Membership of Hamas and other political parties, such as the Popular Front for the Liberation of Palestine (PFLP), is illegal.

IDF troops and the Israeli Border Police act with impunity in their dealings with the subject population. Their use of excessive force, to the point of causing serious injuries and even death, is institutionalized and prosecutions of offenders rarely happen and even more rarely lead to any appropriate punishment. Soldiers and Border Police, far from fulfilling their role as protectors of the occupied population – as laid down in the 4th Geneva Convention – , have taken on the role of oppressors. Nowhere is this more evident than in their actions in support of land thefts, destruction of property and aggression and violence by Israeli settler/colonists.

The inescapable conclusion that I, and others who have followed the course of events over time and who have experienced the situation at first hand, is that we are witnessing the ethnic cleansing of the West Bank. The cancerous growth of settlements and the brutal nature of the Israeli occupation seem designed to profoundly alter the demographic balance of the country by making life for the indigenous inhabitants simply impossible. Those who do not leave will become, inevitably, second class citizens in their own land, Untermensch, “hewers of wood and drawers of water” for their Israeli masters. And all with the connivance, indeed support, of this and previous Australian governments. To our shame.

* Anyone who doubts the objectivity of my conclusions in the previous paragraph need only consult recent maps drawn up by OCHA (the UN Office for the Co-ordination of Humanitarian Affairs) which show the extent of Israeli land appropriations. Less than 18% of pre-1948 Mandate Palestine is now controlled by Palestinians, and this meagre proportion is being whittled away daily.