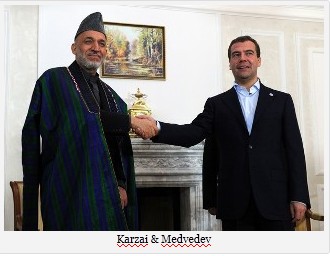 Afghan President Hamid Karzai’s recent trip to Moscow marks an unprecedented state level rendezvous by an Afghanistan Head of State. The first since the Soviet backed President Najibullah’s trip; whose term ended shortly after the Soviet Union withdrew its forces from Afghanistan.

It is a life and death game for Hamid Karzai akin to spinning the cylinder of a new Russian revolver, aiming for a cajolement by a western backed Afghan state with the Russian federation— once its foe— and to tie the knot for a new marriage as if there was always a sweet serenity in their past history. However, in this tweaked “Great Game” of the 21st Century for this Central Asian state, Russian president Dmitry Medvedev has already mastered his single bullet roulette play by skillfully defeating the Karzai impact. In contrast and seemingly with pitiful and insincere solicitations towards the Russians, the odds for Karzai’s Afghanistan surviving are slim and thus worthy of undergoing some litmus tests that could result in great success or utter failure for Afghanistan.

Friction with the West and the Immense Hurdles

Is Karzai’s dangerous game-play prompted by the political climate between Washington and Kabul getting strained and spiraling deeper into a black hole of emptiness? Of course, the insurgency has spiked, the Taliban are ignoring efforts of reconciliation with the rigged-ridden and long-suffering Afghan government; there is rampant corruption, the U.S. is unsure of troop withdrawal by 2014, there is a lack of Pashtun participation in Afghan National Army and Police, a tribal imbalance, drug trafficking, a fragmented NATO alliance, regional actors muddling in Afghanistan’s state of affairs, an Afghan constitutional crisis, no Georg W Bush style video conferencing between Obama and Karzai, and many other factors that are causing ill progress scenarios and ultimately friction between the Karzai government and the West.

If Obama’s special envoy to Afghanistan and Pakistan, the late, Richard Holbrook’s funeral ceremony resembled a political barometer of relations between Washington and Kabul, where Pakistan’s President Asif Ali Zardari participated and Hamid Karzai did not show up in Washington last month, then the questions surrounding this new Moscow stopover by Karzai may be indications that there are clearly new ideas being brewed.

Is it time to change the political tide back towards a dangerous old friend and subsequent foe of the 80’s Afghanistan occupation, only, now under new management, but still attached to cold war era comrades —Vladimir Putin and Dimitry Medvedev? It remains to be seen as to how much the Afghan populace could absorb of this love hate relationship between Kabul and Moscow. Because, one must bear in mind, most Afghans cannot distinguish between the old Soviet communist mentality and the new democratic Russia. To them, they are the same tyrants that killed over 2 million Afghans during their occupation of Afghanistan. And therefore, the Soviet war wounds are still fresh in the minds of many Afghans, and efforts at welding a positive common consensus towards Russia amongst the Afghans may not serve Karzai very well.

A negative test result was made apparent when a recent joint U.S-Russian counternarcotics raid in Eastern Afghanistan raised eyebrows in Kabul palace and amongst the Afghan populace, reminding them of personal pain and suffering at the hands of Russians in echoes of Soviet occupation of Afghanistan.

Mr. Karzai may think that he has an opportunity to use one against the other (U.S. verses Russia) for his elongated power grab, and personally benefit in a way that may not serve any good for the average Afghans.

Russians are concern about two main threats emanating from Afghanistan; drugs and terrorism, and it is clear that these problems must be dealt with, at least at the Afghan border. If Russia is willing to support [Afghanistan] in any possible way, then it should not be direct military involvement in Afghanistan. No Russian solder should ever be on Afghan soil.

However, there is also the direct possibility that any Russian involvement in Afghanistan could spark a terrorist response akin to Chechnya and the Caucuses events inside Russian territories via Afghanistan, and consequently tempt the Russians to engage once again in some kind of militarily operations inside Afghanistan; clandestine or otherwise if the U.S. completely withdraws.

Russia also has the TAPI (Turkmenistan-Afghanistan-Pakistan-India) natural-gas pipeline in its radar; wanting to gorge the lion’s share of any future worldwide energy demand benefits from it, which may cause friction with other interests in the West where Karzai has a fiduciary obligation to his old employer UNOCAL and other Western energy companies.

Hamid Karzai, unlike a strong and true Afghan statesman is apparently but stealthily in his cyclical emotional tantrum. His crony and gratuity tipper Ahmadinejad has also engaged in a love-hate relationship with Karzai. He stepped directly on top of Karzai’s cronyism, showed his upper hand and used a dose of power play by halting thousands of oil tankers en route to Afghanistan for a month, consequently depriving millions of Afghans of heat in the frigid Hindu-Kush country.

Out of desperation, Karzai made the move to call upon Russian President Medvedev, and opened up a dialogue emphasizing Russian’s role in Afghanistan, including counternarcotics cooperation. As Western powers ready themselves for an exit, the relationship with Russia is going to be a key factor in the future. However, the looming danger is that, when the gun barrel is loaded with the one bullet and it is Hamid Karzai’s turn to fire, he won’t be able to fake his way out of the consequences and could spark a second round of Russian versus Afghan strife and conflict.