The United States has spoken for democracy in Egypt, but it is not stopping aid to security forces, now killing Egyptians

An analysis on the recent Egypt uprising was provided by former US ambassador Edward Peck in an interview with Press TV’s Waqar Rizvi. The transcript of the interview follows.

Press TV: Netanyahu’s government believes Mubarak will survive this unrest by having to exercise force, power on the street. It says Mubarak’s well rooted in the military and security apparatus. Is this true?

Peck: Well, we are going to find out I suppose, but I think it’s fairly typical of the Israeli government to urge the use of force, which of course, is what Israel does whenever it faces anyone who is unhappy with the situation in occupied territories for example.

They get pretty violent there. You remember not too long ago when Arabs in Israel, Israeli-Arabs, demonstrated and a fairly large number of them were brutally killed, which is how the Israeli government believes it should be done. I’m not sure I agree with that approach, but it’s certainly what they do.

Press TV: Though the US has spoken for democracy, it isn’t standing by protestors by ending aid to security forces now killing Egyptians. Why is that? 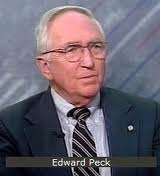 Peck: Because the relationship is supposed to transcend what could be a minor bump on the road to the sort of things that the American government would like to see.

So our relationship has been largely based on support for the government to be able to maintain its borders and protect itself and some of that, of course, spills over into what we would call “maintaining order,” police, that sort of thing.

That is a typical relationship and it looks as if in a country such as Egypt the military aspect of the government has grown pretty strong, perhaps too strong, and I’m afraid and very concerned that we might see a great deal of violence tomorrow which an awful lot of people expect and some people want and I think that could be bad for everybody in the area especially in the short run.

Press TV: Egypt is a powerhouse in the region, with its citizens spread far and wide within the Middle East. How, then, will countries with large populations of Egyptian expatriates react if Mubarak’s government collapses?

Peck: That is a very pertinent question. I remember back in the days of Saddam Hussein and Iraq, where there were lots of Egyptians that went to Iraq for the purposes of helping to build the economy and I remember what happened when the Palestinians, who also had lots of expatriates working in other parts of the Arab world, there were sometimes a tendency on the part of the governments where expatriates are in large numbers to perceive a possible security threat from those people.

I do not know how realistic that appearance of the threat is, but I think it is rational to expect governments that face that internal problem will be watching carefully to see what it is they need to do to maintain stability and security in their own countries and that could affect Egyptian expatriates.

Press TV: The 2011 has begun on a tense-filled note for Arab dictatorships. How lasting, if at all, will demands by people for freedom and rights, that the US was never able to push for successfully, be in the long-term?

Peck: You know, the United States seems to have the tendency to believe that other people should do things the way we do even if those other people do not necessarily see it the same way.

If I were in charge of the American government… I would be very careful as to what I said in commenting about this kind of a problem in another country, especially when it is a potentially serious problem, not just for the country itself but for the region, and speaking too much on the subject when it is not directly our problem. We have not caused it, then we are not going to control it.

We would be better off not saying much certainly much less than we are saying now as everybody has to tell the Egyptians, both the government and the people, what they should do and what they shouldn’t do. It is not really our affair.

US authorities have warned the Egyptian government and protesters to avoid violence as conflict might escalate with the presence of Egyptian opposition figure Mohamed ElBaradei on Friday.

Press TV’s Waqar Rizvi has conducted an interview with Ramzy Baroud, author and journalist from Seattle, regarding this issue:

Press TV: How do you see ElBaradei’s return to Egypt affecting the intensity of the protesters?

Baroud: I think there is a possibility that ElBaradei’s return might be part of an contingency plan if you oversee the post Mubarak era, I think there is a growing sense that the Mubarak regime will either be eradicated after all of this, especially considering what could happen tomorrow or at least there would be some serious changes in the nature of the regime in the coming days and weeks.

Therefore, ElBaradei’s return might be related to all of this, I hope that this is not the case and ElBaradei’s return is more or less a personal initiative related. He has involvement in the democratic association and various political parties in Egypt are also involved. What really matters right now is not ElBaradei frankly.

What truly matters is the Egyptian revolution, the popular uprising in Egypt. It is not co-opted and it is not reduced to be that of the character of one individual or one specific political party. It is represented of the consensus being witnessed in Egyptian streets right now.

Press TV: … [US President Barack] Obama has now asked for reform as absolutely critical in Egypt and the state department spokesman refuses to say if the US would in fact cut aid to security forces that are now killing Egyptians. Do you see that as a bit hypocritical or as the US being simply smart?

Baroud: Very much so. I think it is a position that is tainted with hypocrisy and the term reform and democracy as far as US reform policy is concerned in the Middle East, it is not really the same or it has not been understood the same way that the popular uprising in Egypt, Tunisia and other countries actually understand these terms. Democracy and reform means something entirely different. We are also looking at the term stability here, what does stability mean?

Stability means the maintenance of the current oppressive regime and as far as he is willing to serve the interest of outside powers, stability is not what Egyptian people are concerned about at all. So, when we hear such terms as reform and democracy coming from the Obama administration, we have to be extremely careful on how we decide for them and how we understand them. Frankly, I do not think that at all means what the Egyptians have in mind right now.

Press TV: As you know, Friday is always an important day for Muslims in the week. Will the Imams have the courage to speak out about the current unrest or is Mubarak’s hold on them strong?

Baroud: It is really interesting, because I’ve been listening the whole day to statements made by people who affiliated with the Egyptian regime and their positions are no longer consistent with their past positions. I think this is a very golden opportunity. What is going to happen on Friday is to determine the future of this movement. If it ends up being co-opted or politicized this might be the demise of the popular movement. Tomorrow is a very important day as far as the Imams are concerned.

As we know, in Egypt even the mosque is divided. I am sure all groups are going to hold on the collapsing regime very tightly, because they are also tying their own future, their own interest to that of the regime. So, we are going to see some of these voices tomorrow, trying to basically name the popular movement tainted or also make statements regarding a decree, declaring them to be Haram and that sort of things. So, it is very important that we understand that they are those people who will always be insistent or consistent with the official position of the Egyptian regime and we cannot be allowed to define the legacy of Egypt, neither tomorrow nor in the future.

Press TV: Many … caution needs to be taken when we have been speaking on Egypt because it is no Tunisia, do you agree and does that mean change will be a lot harder to come to this US ally?

Baroud: Yes and no. Egypt and Tunisia are two different countries and have different histories and political contexts perhaps, but at the end of the day oppression is oppression. The Egyptian youth and behind them their societies and communities are seconding a call on reform, change and democracy.

That is very much genuine and very much similar to that of Tunisia, I think Tunisia is a microseism to what has happened in Egypt and the reflection of each other but again we have to respect the uniqueness and the historical specificity of each country.