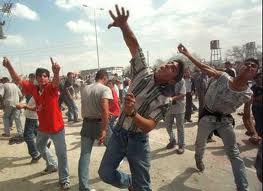 Apparently Jerusalem seeks to convince its allies that it is in the ‘West’s interest’ to maintain the stability of the Egyptian regime. In other words, Israel urges the ‘Goyim’ to ‘keep being subservient to Jerusalem’. Jerusalem was  foolish enough to admit that Mubarak was there to serve Israeli and ‘Western’ interests.

Over the weekend Israel called on the United States and a number of European countries to restrain their condemnation of President Hosni Mubarak to “preserve stability in the region.”

Let’s all be clear about it : as far as Israelis are concerned, ‘stability in the region’ means a few million Jews living in ‘safety’ on Palestinian land, at the expense of one billion Muslims. But I guess that this Zionist militant expansionist fantasy is crumbling in front of our eyes now.

Apparently the Israelis detect some confusion within Western capitals : “The Americans and the Europeans are being pulled along by public opinion and aren’t considering their genuine interests,” one senior Israeli official said. The Israeli official was kind enough to suggest to Europeans and Americans what their ‘genuine interests’ are. Seemingly, the Israeli always know better.

The Israeli official was also clever enough to envisage a tidal wave of mistrust between the West and its Middle Eastern puppet regimes. “Even if they (the Westerners)  are critical of Mubarak, they have to make their friends  (the puppets) feel that they’re not alone. Jordan and Saudi Arabia see the reactions in the West, how everyone is abandoning Mubarak, and this will have very serious implications,”

The senior official is obviously correct — We are indeed, entering a new era : Corrupted regimes in the Middle East are about to crumble, one after the other, as people all across the region rise up. Those in the West who were stupid enough to dismiss the Palestinian Intifada are now waking up to the reality of  a regional Intifada. And the collapse of American puppet regimes in the region could dramatically affect global economies and energy prices,  bringing Europe and America to their knees.

For years I have been arguing that Palestinians are at the forefront of the battle for humanity; alone,  they faced Zionist evil.  However, the time has changed, and  it isn’t just Gaza or the West Bank anymore — Today it is Cairo and Amman, and tomorrow, as energy prices sore beyond affordability, it could well be any Western capital.

We are all Palestinians, because we share the same enemy.  We are all tired of Zionist driven expansionist wars. We don’t want ‘Israeli officials’ to preach to us about Western interests. We don’t want to see our elected politicians dancing to the Jewish Lobby’s irritating tune. It is time to emancipate humanity from the Zionist grip.