May God zap him with a thunderbolt! He rode roughshod over the Basic Law, hijacked the presidency and turned the peace pantomime into a bloody farce.

On his watch disunity became the name of the game while diplomatic skills were jettisoned, or more likely never mastered. 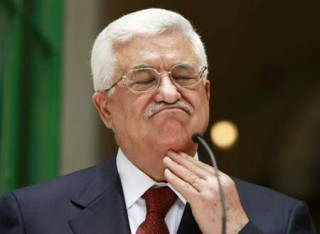 In all our joy and excitement for Egypt let us not lose sight of the grey and sinister blob that is Mahmoud Abbas.

He must be asking himself – fearfully – why he has so far escaped the purge while his bosom-buddies Hosni and Zine are sent packing in disgrace.

Some say Abbas isn’t a bad guy, he just lost his way. Actually there’s a long crime-sheet against him, too tiresome to catalogue in detail here.

A founding member of Arafat’s Fatah faction, he won the presidency of the Palestinian National Authority in 2005 in a dodgy and deeply lopsided contest – let’s not dignify it with the word ‘election’ – in which Israel seriously interfered to obstruct other candidates. He has overstayed his term by two years and is widely regarded as having no legitimacy and no popular mandate, yet he’s still propped up by the US and Israel and their hangers-on.

In 2007 he dissolved the Hamas-led unity government and appointed Salam Fayyad prime minister, a move that was almost certainly illegal under Palestinian Basic Law and designed to ensure the disunity and weakness that Israel so badly wanted to see.

He has been further undone by the Wikileaks revelations that the Israeli government “consulted with Egypt and Fatah prior to Operation Cast Lead, asking if they were willing to assume control of Gaza once Israel defeated Hamas”.

A true Palestinian patriot surely would not have kept silent about an evil plan to commit war crimes against his fellow countrymen!

It seems he also asked Israel to tighten the blockade of his countrymen in Gaza, even inviting the racist entity to re-occupy the crossing zone between Gaza and Egypt.

It looked suspiciously like he was trying to bury the Goldstone report when he withdrew Palestinian support for a vote in the UN Human Rights Council to have it sent to the General Assembly for possible action. Such a vote would have been a first step toward war crimes tribunals, and it is reported that he was warned by US officials that this would complicate efforts to restart the Israeli-Palestinian peace talks – by then hopelessly discredited anyway.

Abbas’s security squads, funded by the US, have been rampaging around the West Bank doing the Israeli Occupation Force’s dirty work, thuggishly suppressing all signs of resistance and rounding up Hamas members. And the PA has now abolished free expression by banning Palestinians from demonstrating in support of the Egyptians and the uprising in Tunisia.

Abbas phoned Mubarak to affirm his “solidarity” with him in the face of growing popular unrest and demands for him to quit. This was despite Mubarak having collaborated with Israel to help the rogue regime maintain its cruel and suffocating blockade of Gaza. Abbas also phoned the Tunisian President Zine el-Abidine bin Ali before he was ousted.

When he took up the post of president, Abbas would have sworn the following oath…

I swear to God almighty to be faithful to the Homeland and to its sacred places, and to the people and its national heritage, and to respect the Constitutional system and the law, and to safeguard the interests of the Palestinian people completely, as God is my witness.

May God zap him with a thunderbolt! He rode roughshod over the Basic Law, hijacked the presidency and turned the peace pantomime into a bloody farce. On his watch disunity became the name of the game while diplomatic skills were jettisoned, or more likely never mastered.

As for the national heritage and sacred places the loon’s negotiators were ready to hand them to the enemy on a platter.

In times gone by, a high ranking loser would recognize when the game was up and do the decent thing. He would retire to his study and close the door. The butler would bring a glass of best brandy and a loaded revolver on a silver tray, and discreetly withdraw. After a few moments’ reflection and penning a farewell note, the gentleman would blow his brains out and save everyone an awful lot of trouble.

The Palestinians had better have a credible Plan B in place when they hear the bang.