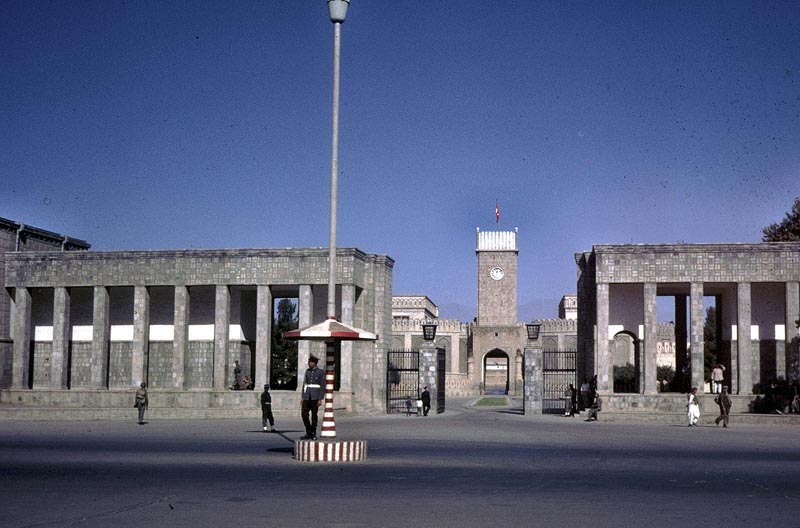 The old Kabul Royal Palace is also given the name “Arg”, the Turkish word for citadel built by King Abdul Rahman (a.k.a The Iron Amir) in 1883 for, as he said in his autobiography, “I, as King of the county, had to face the difficulty of having no house to live in….Until the time I built a new palace for myself, I lived in tents and borrowed mud-houses belonging to my subjects.” Thereafter, his two dynastical siblings were enthroned as the occupants of this iconic Afghan dwelling.

The Palace hosted many glittering assemblies, including the coronation of the Kings of Afghanistan. It also served as the congregational seat for the National Assembly prior to the completion of the National Assembly building in 1964; where members of the Loya Jirgah met in a historical effort to consider and adopt a new constitution for Afghanistan. In addition, within its glamorous halls, state receptions were held and Ambassadors to the Royal Court of Afghanistan presented their credentials to King Zahir Shah; who also eloquently received tribal elders and dignitaries on religious and national holidays and sat in their audiences. Then, all those alluring moments of Afghan style democracy with a moderate pace of reform, was set as a standard model over the next 100 years since its inception within those very chambers, has now been replaced with a behavior of corruptness resembling a hilarious entertainment as an extravaganza of slapstick comedians playing a crime syndicate plot of an Afghan style mafia jubilation.

Nowadays the egress and ingress within Kabul’s Palace by President Hamed Karzai’s inner circle guarantees a contemptuous location for their power akin to a 1920s Al Capone style Chicago hideout, where the abuse and misuse of resources, funds and drug money easily makes their ways into offshore accounts through centuries old system called “Hawalas”. Despite the fact that the Kabul International Airport (KIA) facility was refurbished and turned over to the United States armed forces in late 2008, there is still no tardiness of money vanishing out of KIA through the aforementioned system by often-secretive outfits or private money transfer businesses, which also offers an ample opportunity to hide the roots of arms and drug trafficking throughout the Muslim world.

The Notion of “Looking the Other Way”

A handful of Afghan supply and customs sergeants given bribes to look the other way, are linked all the way to the top, inside the Kabul Palace. One may ask, if the U.S. has full control and responsibility for KIA then why is the U.S. cooperating with the drug trafficking? The answer to that is a bit complicated, but the opium trade is controlled mostly by the Pashtun warlords, and these folks have co-opted units of the Afghan National Police (ANP) who provide them with protection. And, the Taliban are overtly against the drug trade but covertly are prone to receive money from it. The next question that arises is; isn’t the ANP being trained by the U.S.? Yes, but the Taliban has infiltrated some of those units. The irony is; at one point, NATO troops had to actually re-liberate towns whose inhabitants were experiencing shaken-downs by the ANP.

A few on condition of anonymity told me, that they routinely see ANP mounted patrols providing armed protection to warlords and other high ranking people in convoys that are well connected to the Kabul Palace carrying opium.

In fact, sometimes, one of the U.S. patrols will run into an ANP patrol and there might be a standoff, and sometimes even a firefight.

Indeed, this sounds like a joke when a lawfully constituted arm force of the Afghan state and host nation fires on NATO troops. The odd part about this is; that it is never publicized and no-one reading about this at the highest level of the U.S. government has expressed outrage. Moreover, why aren’t there sternly worded ultimatums put to President Karzai over these incidents?

Well, Hamid Karzai is a passive aggressive and wobbly leader. He does exactly what the theater commander tells him to do; then, for odd reasons, flings himself into the opposite direction. On the contrary, drug interdiction is not NATO’s job. There are in fact, multiple organs of the United States Government operating in Afghanistan at cross purposes. For instance, the U.S. State Department has the counterdrug mission. To prosecute this mission, they hire contractors, akin to Blackwater types usually, to conduct search and destroy missions against opium fields. As the result, this infuriates the warlords, who then retaliate by putting a car bomb next to an American checkpoint somewhere. The U.S. Military’s job in contrast, is winning “hearts and minds”. They don’t really care if the warlords grow opium so long as they don’t support the Taliban against Karzai. So the U.S. also looks the other way as the opium flies out of Kabul International Airport.

There are many hands in the cookie jar, and some are caught and proven guilty but exonerated of their crimes. The former warlord and governor of Herat, Ismail Khan, now head of Afghanistan’s energy and water ministry where millions of dollars were supposed to be used for government projects, are missing due to corruption. He was spared by his “Godfather” Mr. Karzai.

Similarly, Mr. Mohammad Zia Salehi, the chief administrator of Karzai’s national Security Council, was arrested on bribery charges—then released the same day, as reported “at the direction of the palace”.

Also the losses at Bank of Kabul could be around $900 million dollars, but the bank has extensive links to senior people in the Afghan government. Hamid Karzai’s brother, Mahmoud Karzai and Haseen Fahim, the brother of the first vice president, as well as several associates of families from the north of Afghanistan; all were cleared despite their prominent real estate holdings, including 12 villa purchases in the Palm Jumeirah development, in Dubai. Most shareholders used loans from the bank to purchase their shares and millions of dollars were siphoned out without any trace. Similarly, other cities in Afghanistan like Kandahar have their own tales of corruption where money is vanishing at an alarming rate.

Afghans feel that the government in Kabul does not look out for their interests. Confined to the palace, Mr. Karzai conversely is looking out only for his own and his cronies’ interests. When he is pressured by the West to do some house cleaning he uses the, “reminiscent of the days of the Soviet Union” tactic. In fact, this tactic shows his insecurity when he manipulates his fellow Afghans with “stand by me because the Americans are like the old Soviet Union but just the lesser of two evils.” This infuriates many Afghans who know better from those gloomy days of Soviet occupation of Afghanistan but gives a tactical political gain for Karzai against the West.

But the real reason for Karzai’s reluctance is concern that cleaning house will deprive him of critical political support. The principal targets are some of his closest allies – which makes sense, as those people are in the best position to divert funds and misuse their power. The president worries that a serious anticorruption drive would undercut his case—and he has argued that the West’s insistence on cleaning up his government is intended to weaken him politically.

10 years past and no results, the Kabul Palace has deteriorated at every level of trust and integrity amongst Afghans. It is time for the West to do its own house cleaning—akin to cleaning Chicago of the 1920s mob—that they created; and reinvent the original wheels of success in Afghanistan, so that Afghans can choose the true occupants for this iconic dwelling, and refurbish it away from its current mafia style spectacle to its glory days as the symbol of hope and prosperity that it once was.