Home Veterans OUT WITH THE COLLABORATORS IN WITH HONEST UNITY 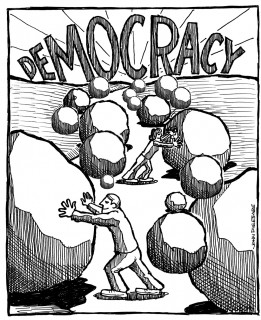 Dickens was able to anticipate, 150 years ahead of his time, the gobbledygook uttered by Western leaders like Clinton, Obama, Blair, Brown and now Cameron solemnly pledging peace in the Middle East while pursuing behind-scenes policies to achieve the exact opposite, in order to perpetuate the conflict for Israel’s benefit.

Meanwhile in the prison called Palestine, where the West killed off democracy because it was the wrong ‘flavour’…

A recent article by Nima Shirazi, “How to Say Nothing without Really Trying”, nicely exposed the drivel spouted by US State Department spokesman P.J. Crowley in his attempt to block a draft United Nations Security Council resolution criticizing Israel’s settlement building. And it reminded us of the sharp political observations of that remarkable Victorian writer, Charles Dickens.

To illustrate his point Shirazi selected this quote:

It is true that How not to do it was the great study and object of all public departments and professional politicians all round the Circumlocution Office.” (Charles Dickens, Little Dorritt, Chapter10)

Dickens was able to anticipate, 150 years ahead of his time, the gobbledygook uttered by Western leaders like Clinton, Obama, Blair, Brown and now Cameron solemnly pledging peace in the Middle East while pursuing behind-scenes policies to achieve the exact opposite, in order to perpetuate the conflict for Israel’s benefit.

In “The Circumlocution Office” Dickens wrote:

Keeping Gaza on the brink of economic collapse

Circumlocution is a posh word for talking bollox. The British Foreign Office has been specially trained in circumlocution.

“We are encouraged by the recent decision by the Israeli government to facilitate exports out of Gaza,” said Foreign Office minister and Israel admirer Alistair Burt last month, adding:

It is certainly important that this leads to a positive change on the ground. We look forward to working with Israel to achieve this through the resumption of access for Gaza exports to all their traditional markets, and helping achieve Israel’s stated target of reaching pre-summer 2007 export levels by the middle of next year. We will continue to work closely with EU partners to press for further progress in Gaza.

Note that it’s Israel’s totally inadequate target for Gaza’s exports that matters to the minister, rather than the Gazans’. And everyone knows by now that Israel’s policy – and Britain’s, thanks to the “unbreakable bond” – is to keep Gaza on the brink of economic collapse.

Back in June, Burt was writing:

It has long been the view of the government that restrictions on Gaza should be lifted; a view confirmed by UN Security Council Resolution 1860, which called for the sustained delivery of humanitarian aid and called on states to alleviate the humanitarian and economic situation persisting there. It is essential that there be unfettered access not only to meet the humanitarian needs of the people of Gaza, but to enable the reconstruction of homes and livelihoods and permit trade to take place.

“Unfettered access” sounds good, but these powerful words are meaningless.

We regularly remind the Israeli government of its obligations under international law on a variety of issues, including humanitarian access to Gaza as well as Israel’s control of Gaza’s waters and the effect it has on Gaza’s fishing industry… The UK has been unequivocal in its calls to Israel to lessen restrictions at the Gaza crossings, allowing the legitimate flow of humanitarian aid, trade and reconstruction goods, and the movement of people. This is essential…

And in the aftermath of Israel’s “Cast Lead” blitzkrieg on Gaza the Foreign Office wrote to me: “The UK will continue to make the case for a comprehensive approach to resolving the conflicts in the Middle East, comprehensive in the sense that real peace will only come when Israel and the whole Arab world are at peace.”

How can you keep a straight face? The British government, where Israel is concerned, is “all mouth and trousers”, as some would say. There’s no sign whatsoever of UN Security Council Resolution 1860 or any of the mile-high stack of fine words being implemented, even though Britain and its friends, individually or collectively, have all the levers necessary to force Israel’s compliance.

Dickens’s Circumlocution Office is indeed alive and well and operating at full blast in London and other major centres in the West so as not to upset delinquent Israel and to make it appear that positive action, like sanctions, is not an option.

Even the Palestinian Embassy in London has caught the circumlocution bug, as shown in this statement by Ambassador Manuel Hassassian in response to the Al-Jazeera’s publication of leaked documents giving details of talks between Israel and the Palestinian Authority:

Al Jazeera’s attempt to imitate WikiLeaks has propagated documents that allegedly were developed from our negotiations with Israel. Even if such documents are factual, they represent discussions of hypothetical scenarios with no concrete or absolute agreements. Concessions can only be made, and an agreement can only be reached, when signed and sealed through public referendum.

But some of these discussions focused on assets that were definitely not for discussion, not negotiable, not for sale and not up for referendum, did they not?

“Negotiations with Israel require considering and debating their point of view, their conditions and their agenda even if it’s at the far-right of one’s belief and position,” continues the ambassador.

Negotiating and challenging these does not mean conciliation on our side, but in fact, an understanding of the issues and obstacles that face us as an authority and governance under occupation. We have tried the path of overt defiance and no-negotiations with Israel which was explicated by the latter to delegitimize the Palestinians.

Knowing what the state of Israel seeks only brings us closer to understanding that only a viable solution for the Palestinian leadership is the key to stability in the region. If these documents are authentic then this scandal has served only to prove that Israel is no partner for peace.

“I am against law – international law in particular”

Elsewhere in the statement there’s this nugget of information:

The PNA’s [Palestine National Authority] position speaks for itself grounded in the principles of international law with the respect to the rights of the Palestinian people. In 2007, Israel’s then foreign minister, Tzipi Livni, said to the negotiators that she was against international law and insisted that it could not be included in terms for reference in the talk “I was the minister of justice,” she said, “But I am against law – international law in particular.”

Knowing that the Israelis regard themselves to be above international law and that normal codes of conduct don’t apply, what was the point of the Palestinians sitting down to obviously futile negotiations in the first place?

If ever there was a need for regime change, this is it. The Fatah-dominated Palestinian Authority, after putting off elections indefinitely, now sees the bravery and determination of Egypt’s freedom movement with alarm and promises local elections “soon” and a general election afterwards. Hamas says it will boycott elections until a proper reconciliation is reached. Besides, many Hamas supporters in the West Bank have been rounded up by Fatah’s thugs, thrown in jail and probably been tortured. Furthermore barmy Fatah is calling for an uprising in Gaza against democratically-elected Hamas!

Given Fatah’s track record, who can trust them to organize fair elections or abide by the result if it goes against them?

For years … US officials have engaged in back-channel talks with Egyptian members of the [Muslim Brotherhood] movement in recognition of its substantial popular support. The unofficial contacts have taken place sporadically since the 1990s but became more frequent after members of the Brotherhood were elected to the Egyptian Parliament in 2005. Afterward, US diplomats and lawmakers held several meetings with Brotherhood leaders… US officials justified the meetings by saying they were merely speaking with duly-elected members of the Egyptian legislature.

In which case the US has no excuse for refusing to talk with the Brotherhood’s offshoot, Hamas. Ditto Britain and the EU. Including Hamas at long last will speed reconciliation, which the West claims it wants to see.

But are Western powers brave enough – just half as brave as, say, a young Egyptian democracy campaigner in Tahrir Square – to do this off their own bat? Or will they have to run to Tel Aviv and ask permission?

Meanwhile in the prison called Palestine, where the West killed off democracy because it was the wrong ‘flavour’…