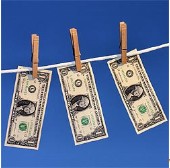 Not Just for Nobel Prize Winners..

We learn from the press and political analysts that, against all odds and in spite of the global financial turmoil,  Israel’s economy is booming. Some even suggest that Israel is one of  the strongest economies around.

‘How come?’ you may ask; besides maybe avocado, oranges, and some Dead Sea beauty products, none of us has actually ever seen an Israeli product on the shelves. They don’t make cars; nor do they make electric or electronic appliances, and they hardly manufacture any consumer goods. Israel claims to be advanced in high-tech technologies but somehow, the only Israeli advanced software ever to settle within our computers have been their Sabra Trojan Horses.  In the land they grabbed by force from the indigenous Palestinians, they are yet to find any lucrative minerals or oil.

So what is it? How is it that Israel is impervious to the global financial disaster? How can Israel be so rich?

Israel may be rich because, according to the Guardian, “out  of the seven oligarchs who controlled 50% of Russia’s economy during the 1990s, six were Jewish.” During the last two decades, many Russian  oligarchs  have acquired  Israeli citizenship. They also secured their dirty money by investing in the kosher financial haven; Wikileaks has revealed lately that “sources in the (Israeli) police estimate that Russian organised crime (Russian Mafia) has laundered as much as US $10 billion through Israeli holdings.”[1]

Israel’s economy is booming because mega swindlers such as Bernie Madoff  have been channeling their money via Zionists and Israeli institutions for decades.[2]

Israel is ‘doing well’ because it is the leading trader in blood  diamonds. Far from being surprising, Israel is also the fourth biggest weapon dealer on this planet. Clearly, blood diamonds and guns are proving to be a great match.

As if this is not enough, Israel is also prosperous because, every so often, it is caught engaged in organ trafficking and organ  harvesting.

In short, Israel is doing better than other countries because it runs one of the dirtiest- non -ethical economies in the world. In spite of the Zionists’ initial promise to bring about a civilised ethical Jew, Israel has, instead, managed to develop an outstanding level of institutional  dismissal of international law and  universal values. It operates as a safe haven for money made in some horrendous global criminal activities. And it employs one of the world’s strongest army to defend the wealth of just a few of the wealthiest Jews around.

Such a realization can  certainly explain why Israel is totally impervious to social equality within its borders.

Since Israel defines itself as the Jewish state, one may expect the Jewish people to be the first to benefit from their country’s booming economy. This seems to be not at all the case. In spite of the economy’s strength, Israel’s record on social justice is appalling. In the Jewish state 18 families control 60% of the equity value of all companies in the land. The Jewish State is shockingly cruel to its poor. As far as the gap between rich and poor is concerned, Israel is listed right at the top of the scale.

The meaning of all of that is pretty devastating; though Israel operates as an ethno-centric  racially orientated, tribal setting, it is proving to be totally careless of the members of its own tribe — In fact, in the Jewish state, a few million Jews are serving the darkest possible interests, the fruits of which, are to be enjoyed by just a very few rich  villains.

But there is a deeper and far more devastating meaning implicit within it all.  If my reading of the Israeli economy is correct, and Israel is indeed a monstrous cash haven for the dirtiest money around,  then the Israeli Palestinian conflict is , at least, from the Israeli-elite’s perspective ,  nothing but a smoke screen.

I hope that my readers and friends will forgive me for saying it —  I hope that I will  forgive myself for saying it — But it seems to me that the Israeli-Palestinian conflict, and Israel’s horrendous crimes against the Palestinian people, actually serves to divert attention away from Israel’s complicity in some colossal and global crimes against vast populations around the world.  Instead of addressing the above relentless greed-driven attempt to grab wealth on the expense of the rest of humanity, we are all focusing on a single territorial conflict, that actually brings to light just one devastating criminal side of the Jewish national project.

It is more than likely that the vast majority of Israelis also fail to detect the deceitful role of the Israeli Palestinian conflict. The Israelis are indoctrinated to look at every possible issue from a national security perspective. They have failed to realise that along the intensive militarization of their society, their Jewish state has become a money laundering haven and a refuge for villains from all over the world.

But here is some bad news for Israel and its corrupted elite.  It is just a question of time before the Russians, Americans, Africans, Europeans, all of humanity, begin to grasp it all — We are all Palestinians and we all share one enemy.

I would even take it further, and argue that it is possible that, not before too long — some  deprived Jews and Israelis will also begin to realise how deceptive and  sinister  Israel and Zionism truly are.

[2] Also, it is rumoured that, prior to its collapse, Lehman Brothers transferred 400 billion dollars to Israeli banks. I am not in a position to substantiate any of these theories — but I would strongly suggest that it is of some urgency to find out how truthful these accusations are.