As Tahrir Square goes so goes the Middle East? 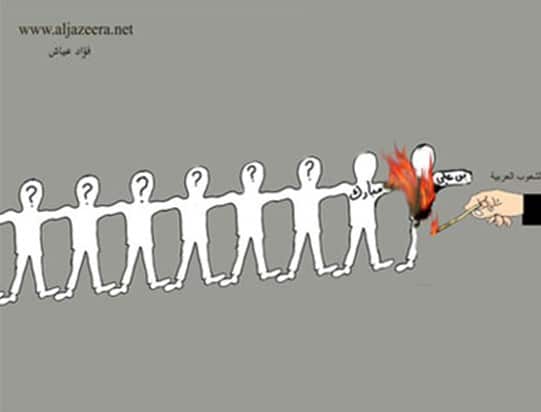 It is difficult to overstate the potential for Egyptian citizens advancing universal aspirations for freedom, dignity and basic human rights now spreading from the determination of those who for more than a week have risked their lives while inspiring much of the World at Cairo’s Tahrir (“Liberation”) Square.  Tahrir public plaza near central Cairo has been the traditional site for numerous major protests and demonstrations over the years, including during the 1977 Egyptian Bread Riots and the March 2003 protests against the American war in Iraq. Washington DC and Tel Aviv are reportedly shocked by the rapidly unfolding and unpredictable revolution.

Less than one week after few outside Egypt had heard of or much less could locate on a blank map of Cairo, “Tahrir Square” the World now realizes it as the epicenter of  the Middle East’s unfolding and unpredictable earthquake event.  The Tahrir Square uprising has led to one Arab diplomat, currently posted to Beirut, observing yesterday: “If there were to be an Arab League meeting this week attended by all the Arab Heads to State, an honest participant might suggest to the assembled potentates to look to their right and then look to their left and realize that in perhaps 24 months close one third may not be attending subsequent Arab League summits.

The Tahrir uprising may, following a cursory examination, appear unconnected with much outside the Egyptian publics urgent longings to escape poverty, unemployment, lack of educational opportunities,  caused by decades of regime economic mismanagement, police brutality and government torture chambers, and pervasive corruption that has seeped into nearly every aspect of Egyptian life. But increasingly it appears that other forces are influencing recent events as noted below.

The eyes, hope and solidarity of  much of the Middle East are on Tahrir Square and the bloodied but unbowed Egyptian people,  who, old and young,  religious and secular, illiterates and lettered,  paupers  and moneyed, all of whom today, following upon the glow of a  spontaneous intifada in the cradle of civilization stand to win or lose so much for the region.

As the Mubarak regime plots a path for the beleaguered President to stay in power  it is employing the well tested bromide of  most despots including citing the need for stability, orderly transition, prevention of religious fanatics and  extremists from taking over and the need for  fighting “terrorism.” The pro-Mubarak Egyptian daily Al-Yawm Al-Sabah is claiming that Hamas is behind much of the instigation to violence in Tahriri Square and other areas of the country.

Not buying all of these scare tactics,  the Obama Administration’s is revving up its “now means three days ago and counting” demands.  Mr .Mubarak told CNN on 2/3/11 that  he\’s fed up and  would like nothing better than to step down but chaos and the Muslim Brotherhood would surely follow. His closest political confident and  just appointed Vice-President Omar Suleiman also predicted chaos if Mr Mubarak resigned, saying it would leave a body without a head. The White House is still leaning toward Omar Suleiman but believes that  Suleiman was aware of the  campaign in recent days to intimidate the opposition, and are staffers are wondering whether he is still an  acceptable choice.

Late word from the Senate Foreign Relations Committee is that the Obama Administration may support  Arab League Secretary General Amr Moussa, who has joined anti-Mubarak protests in Tahrir Square, and is hinting he may run for president in the upcoming election. Israel would support him over Mohammad al Baradei  who many view as pro-Iranian.

Still, the Mubarak regime is not without supporters. Former Israeli Defense Minister Binyamin Ben-Eliezer has defended Egyptian President Hosni Mubrak, saying his collapse will be  a “tremendous loss” for Israel. The former army general praised Egyptian President Hosni Mubarak for supporting Israel for thirty years, Israel\’s Arutz Sheva newspaper reported.  “When I watched his speech in which he said he would step down, it pained me to see his collapse,” Ben-Eliezer said on 2/2/11 about Mubarak.

Both Washington and Tel Aviv are were reported shocked by the speed of  the Egyptian revolt and their intelligences agencies admit not seeing it coming. Much of the American reaction is being scripted by AIPAC and other Israel lobby agents who regularly contribute campaign cash to 90 percent of the  US Congress , including  390 of  the 435 Members of the House of Representative ( 89.7%)  who voted to support Israel after it committed repeatedly condemned  serial murders of innocent civilians and myriad crimes against humanity in Gaza.

These Israeli-pushed “American”  initiatives will likely range from possibly terminating aid to Lebanon ( some Obama Administration friends of Israel claim there is a  a link between the  South Beirut Hezbollah neighborhood of Dahiyeh and Cairo’s Tahir Square events ) and cutting off  Egypt’s  nearly 30 years of annual multi-billion dollar cash grants as well as massive military hardware.

The US-Israel imperative appears designed to immediately regain control and co-opt the Tahrir uprising  and quickly channel  the uprising into a political cul de sac until Egypt  can be returned to “normal”, meaning US-Israel shared hegemony.

What will ultimately determine  in which ways the Middle East moves following Tahrir Square events is not the armed might of the regional super power or the weapons of the global superpower. Both Israel and the US can have a short term impact but the former is shaking  while the latter, equally impotent to subdue 83 million Egyptians and  perhaps soon millions of Palestinians, Jordanians, Yemenis and others, is trying to stall any major regime change in favor of  cosmetic adjustments to the current government.

Even the Obama Administrations current public choice, Omar Sulieman is meeting with increasing resistance in Washington as details of his CV emerged including being a torture specialist and possibly a Mossad agent.

What  both Israel and the US  fear most is a determined and successful grass roots movement than will liberate Palestine from Israeli occupation. The Obama administration can be expected to continue  to temporize events as best it can while calculating how to insert its choice of a compliant President in Mubarak’s palace.

As one Congressional commented by email: “ The last thing the White House or Israel want is an Egyptian Chavez, or even someone like Turkish Prime Minister Recep Tayyip Erdogan.  Completely unacceptable would be anyone with even the hint of pro-Iranian or Hezbollah leanings.

The  State Department favors another strong man, with an essentially rubber stamp Parliament after “free elections” as long as there are no  troublesome Algerian, Gaza, or Lebanon style  election results. The US-Israel bottom line is that Egypt’s next government must be one that  will  guarantee that the 1979  Camp David Accords and Egypt’s willingness to  continue accepting a total of more than three billions in US taxpayer dollars annually as bribe money to collaborate with Israel against Palestine.

History is filled with ironies. One of them is the coincidence that two of the fundamental causes of the unfolding Egyptian revolution happened within months of each other both 30 years ago— soon to be followed by the beginning of the current Mubarak dictatorship—the Islamic Revolution in Iran and the US sponsored Camp David Accord. The Camp David giveaway and cave-in to colonialist Israel was never accepted by the Egyptian people, by the Islamic Republic, or by any but a small percentage of the people of the Middle East.

The hegemonic objectives of  the 1979 Camp David have rolled across the region for three decades, being  rejected and increasingly confronted by a growing culture of Resistance set in motion with the 1979 Imam Khomeini-led revolution.

Both 1979 events fueled myriad other more immediate causes  including those noted above and significantly inspired the current  Egyptian  eruptions, some of  the paths of which are predictable while the  results are unknown.

There are many other Tahrir Squares in the Middle East. One of which is  Al Aksa square in Jerusalem,  the eternal and indivisible capital of Palestine. It remains to be seen when or if Palestinians will revive Jerusalem as a  modern day resistance place name and whether like Tahrir Square, Egypt, Jerusalem will rise up in support of increasing cries for Palestinian liberation as the inspiration and revolution of  their neighbors in Tahrir Square spreads.