Gulf War Veterans Came Home Ill But NO One Knew Why……

The American people, thinking it was such a fast war, there would be hardly no new casualties to worry about or take care of. Hard to believe it has been 20 years but even harder to believe is that these veterans are still trying to have their claims approved for what their service did to them. 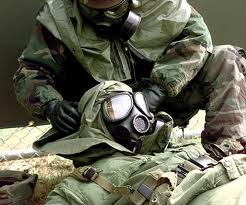 Impossible to believe is that the Army ordered units to destroy their records. Now we know how bad it has been for these veterans to have their claims approved and why it has been impossible, but we also now know that the DOD has admitted what they were exposed to.

The Defense Department did send a letter telling the same soldier that he and others in his unit were in an area where exposure to nerve agents saran and cycolosarin was possible, but they should not worry about any side effects.

“So we all got exposed to nerve agent as well, and according to the military, that is never going to affect us,” he said. “They just wanted to advise us that we’ve been exposed.”

Rep. C.W. Young, R-Fla., says he did not know of the Army’s letter until now. His office asking the Defense Department to look into the matter.

Here is a good place to start to understand what this is all about.

PBS Gulf War Syndrome
So they did their duty as yellow ribbons and support the troops were covering almost every business and flags were waving from most homes. Hey, they won and that was all we needed to know. It was over so fast that the images of bodies on the side of the road were replaced by Iraqis surrendering to US forces because they knew they would be treated better than Saddam would have treated them. After all, they lost.

Yet when our own POW’s filed a law suit against Saddam, the Bush Administration blocked it.

RETURNED PRISONERS OF WAR
FROM GULF WAR I –1991

The latest chapter in the legal history of torture is being written by American pilots who were beaten and abused by Iraqis during the 1991 Persian Gulf War. And it has taken a strange twist.

The Bush administration is fighting the former prisoners of war in court, trying to prevent them from collecting nearly $1 billion from Iraq that a federal judge awarded them as compensation for their torture at the hands of Saddam Hussein’s regime.

The rationale: Today’s Iraqis are good guys, and they need the money.

Americans want things all tied up when wars end. They don’t want to hear much about them when they are being fought and even less when they are over. We pride ourselves on saying we support the troops, but fail to admit that support ends at a certain point when our own lives matter more or we don’t want to be upset over sad stories that would change our view of ourselves. The truth is as good as we are at taking care of our veterans, we really suck at it. All these years have come and gone and now we discover our own military betrayed them.

ST. PETERSBURG, Fla. — A letter from the Army Department telling units to destroy their records after the end of Operation Desert Storm has made it more difficult for injured veterans to get the medical benefits they need.

The letter, never made public before now, says units were told to destroy their records because officials had no room to ship the paperwork back to the United States. The letter goes on to say it was in direct contradiction to existing Army regulations.

“This could have been one, five, six, a couple of hundred or this could be thousands [of soldiers],” says Andrew Marshall, a Florida regional officer with the nonprofit Disabled American Veterans group. “You don’t know.”

One solider trying to get help from the Veterans Administration for combat-related injuries says he has been turned down because his records are missing. He did not want to be identified.

He says he has all the medical records for the time he was in the states, but the records for everything that happened outside of the country are gone.

Marshall says the Army should have backups to the records destroyed in the Persian Gulf.

But the Army’s letter says several years after soldiers began putting in medical claims, it was discovered all records below the brigade level no longer existed.

Operations Desert Shield and Desert Storm pushed Iraqi troops out of Kuwait; it lasted from Aug. 2, 1990, to the cease-fire on April 11, 1991. In the conflict, 383 service members died; as of last year, 467 were reported injured. About 2.225 million troops served in the war, according to the Congressional Research Service.

Not just the after-action reports have been destroyed or are missing. According to some files, when some veterans come to the Veterans Administration to get help for service-related disabilities, records show they served, but medical records are missing.

That means when the vets make claims, they are turned down.
click link above for more

UPDATE
I went to WTSP.com for the original story and here it is.
Veterans of the first Gulf War can’t get treatment Army admits medical records were destroyed
At the bottom of the article there is a call for veterans to tell the news station their story.

Indian Rocks Congressman Bill Young has never seen the Army letter until now. His office asking the Defense Department to look into the matter and see how many this affects.