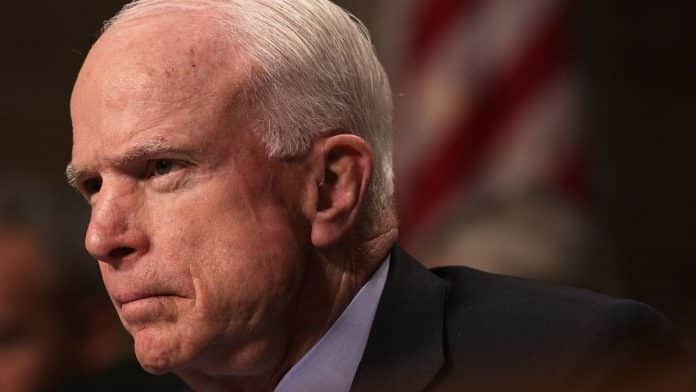 Speaking with the unofficial U.S. Republican News Channel, FOX News, Republican Senator McCain again showed his anti-democracy colors in full view global view, a full frontal if you will.  (see video).  His unequivocal support for his constituency in his beloved Israel overshadowed our American values for democracy, freedom, and liberty for all peoples in the world including but not limited to the middle eastern peoples.

Worse, while the USA is aiming to make deep cuts to its programs for its people this flip-flopping traitor is setting up the USA to make a boogeyman out of democracy in a new world where the kids are alright and he’s all wrong.  McCain is going to find a way to make sure our taxpayers get fleeced again by the Zionist leadership that occupies his office and the office of his congressional colleagues.

Personally, I am sick and exhausted by the occupation of our government by these 20th-century forces.  They have fleeced us to the bone and made a mockery of our national values and aspirations.  This fleecing must go and like Mubarak.

McCain needs to be sent to Sharm Al-Shiek with Hosni for an extended vacation under the flag of a despot posing as a promoter of democracy, freedom, and liberty.  We don’t want our monies going to Israel or any other country that oppresses and uses military force to ensure its agenda is upheld.

The children of Egypt showed us the peaceful way forward and McCain did NOT get that memo.  He was too busy burying his nose up his lobbyists’ ass and just couldn’t see the enlightened future.  Relics must go to the museum and I call on all Israelis, Arabs, and Americans to reject these anti-American values Senator and throw his ass out with the rest of those who are anti-American values.   T

his is no country for old men.  The global children are call and he’s not answering.  It’s time to retire this relic.

IN OTHER EVENTS AND NEWS from Around the Globe……..

A century of American failed trajectory replies to the Egyptian peaceful revolution to “drop dead” against the will and to the detriment of the Egyptian peoples. Thereby dismissing basic humanitarian inherent rights to peace, freedom, democracy, and the basic right for all peoples to define their own decisions and fates with no interference. “We are not so different, Egypt under Mubarak and America under whatever gang of financial criminals and foreign thugs is controlling the government today.” Posted by Gordon Duff,  VT

Disingenuous documented and self-admitted failed leadership that operates the deception as though Mr. Murabak heads the Egyptian government apparatus. Thereby, creating an ultimate diversion of exponential insult and parody by appointing the second dictator forced against the will and to the detriment of the Egyptian people’s peaceful revolution for change. “A dictator who has been in power for 30 years will be the one to implement democracy” was a farce.” Posted by Raw Story

Mr. Mubarak hangs on to farcical power by repeating American war criminals’ false narratives distracting of Egyptian people’s peaceful demonstrations. Conversely, forcing Mr. Mubarak and his crony militaristic dictators, waiting in the wings, to incite a possible violent reaction by the millions of demonstrators. Resulting in the ultimate staging of CIA con and deception of creating extreme violence and war on the Egyptian citizenry or appointment of a proxy dictatorial apparatus. “Mubarak not stepping down passes authority to CIA torture point-man Suleiman” 02/11/2011. Posted by Legitgov.org. 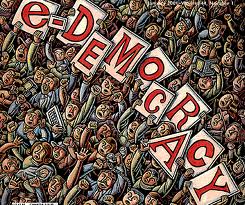 The expression of the Egyptian people’s right to peaceful revolution is not defined by black, white, religious, Arab, Jew, American, European, Asian, poor, rich, evil, good, right, or wrong, The rising expression of the Egyptian peoples against repression is a basic inherent humanitarian right to self-dignity and self-determination. Centuries of laws handed down to all peoples, all nations, and all religions. Centuries of inherent basic human laws were ignored by U.S. Imperialist Colonial ideologues.

The primary cause-effect of why America will not permit and cannot face the historically documented facts that Imperialism has run its course. “The fact that the Egyptian protesters have made more strides away from tyranny and towards democracy in 2 and 1/2 weeks than the American military has been able to do in 9 years if Afghanistan and 7 years in Iraq prove it.” Posted by Washington Blog

Activist Post reports the April 6 Movement of Egypt is a staged event co-opted by Movement.org a CFR proxy. “It would be strongly recommended that readers go to Movements.org themselves and explore the website, in particular the 3 summits they have held and those that were in attendance. Everyone from the RAND Corporation to the Council on Foreign Relations comes to “prod.” Movements.org truly is a new tentacle for manipulating and undermining the sovereignty of foreign nations.” Posted by Tony Carlucci Activist Post

So in effect the U.S.holds steadfast control of events of the final outcome in Egypt with deception, diversion, and distraction. A continual absolute global domination and threat to all humanity by anointing a new round of dictators and poseurs.

The magnificent Magna Carta c.1215 is eight hundred years of basic human rights to law and the construction of society into people’s humanitarian rights of self-determination. The inherent dignity and rights to their labors. property, and assets. The absolute confirmation that no individual, entity, government, nation, forum, or select exclusive special interest group “owns” the right to Free Speech and Self Determination.

Magna Carta “Abuses by King John caused a revolt by nobles who compelled him to execute this recognition of rights for both noblemen and ordinary Englishmen. It established the principle that no one, including the king or a lawmaker, is above the law.”

Becky Akers writes in an article on slavery, “retired General Stanley McChrystal dares lecture us that we don’t yield enough of our lives to the government despite its exorbitant, unending, and pervasive taxation, compulsory surrender of our children to its brainwashing, forced “service” on juries, and even mandatory titillation of federal thugs at checkpoints in airports:

“Americans performing critical, selfless service to our country are less common than they must be,” he scolds in 1500 platitudinous, self-righteous words for Newsweek Magazine. Posted by Becky Akers New American Journal.

It took 150 years from the signing of the Declaration of Independence c.1776 to have particular mad-men select interests to declare slavery invalid, the rights to labor, assets, property, the right to vote, and the inherent basic human rights of free expression for all men and women regardless of race, religion, color, or nationality.

The American populace’s “see something say something” fear mantra. An immediate reply each day to 21st Century mad-men-women slavery should address the Illegal search and seizures against the 4th Amendment, denial of free speech, and freedom of expression against the 1st Amendment Right of the U.S. Constitution.

No individual, entity, government, nation, forum, or select special interest group “owns” the right to Free Speech and Self Determination. Magna Carta c.1215 “It established the principle that no one, including the king or a lawmaker, is above the law.”

Therefore, U.S. Imperialism’s arrogance and contempt for humanity are being exposed and challenged by the basic rights of all peoples to peacefully demonstrate against suppression. Albeit a staged co-opted proxy event conducted by the CIA color revolutions remains blatantly exposed by Egyptian peaceful demonstrations.

U.S. Imperial Colonialism accelerates its dismissal of International Humanitarian Laws, operates illegally above all spiritual laws, ignores 800 years of man’s written laws, and the flawed insistence that the only U.S. forced Imperialism “owns” the exclusive right to determine the world masses of self-dignity and free expression. Illegal ownership of self-dignity and free expression collaborated by “McCain Calls Middle East Pro-Democracy Movement A ‘Virus.’ ”

To the great voices, the outstanding courage, and the fearless determination of the Egyptian people, the world greatly appreciates and is humbled by your peaceful expressions of change exposing the greatest threat to humanity, culture, society, and global security.