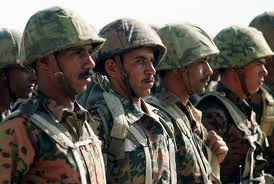 Egyptian military has been painted as a stabilizing force and trusted by the Egyptian people. This article give a far different view. Military is apparently as corrupt as Mubarek!

We are constantly being advised that the Egyptian Military has the situation under control. As the situation develops it is becoming increasingly apparent that there is something wrong with this picture. The military and the media assures us that the morganatic wedding between the Generals and the Masses will proceed as scheduled. As the old song goes, “its time to wind up the masquerade…the piper must be paid.” Is Iran sailing through the Suez sending a message of who may be trying to gain power during this chaos?

There is a great hunger in the land. The people have access to Facebook and the faces they see increase their rage. They see Generals, unnamed and anonymous, promising to give them bread and democracy. However, they see that the truth is otherwise. They are well aware as we may not be that the Egyptian Military runs beach resorts, banks and bread factories. Their subsidiaries manufacture automobiles, televisions, furniture, washing machines and other myriad necessities. They even have the hubris to control the bottle water industry. The brand is named “SAFI” after one of the general’s daughters. From this gigantic conglomeration of businesses, the generals pay no taxes, use drafted workers and buy real estate on advantageous terms. They are not responsible to report anything to the Egyptian people or to the legislature. The ouster of Mubarek was merely a placebo to attempt to cover up the fact that the generals have been the power behind the government. Their names are unknown except for the leader, Field Marshall Tantawi, who has often been referred to as “Mubarek’s poodle”. They have established marshall law, dissolved Parliament and cleared Tahrir Square with the carrot stick of eventually permitting democratic elections.

Still unanswered are the protestors with the release of thousand of political prisoners. Such brazen exercise of authority might be justifiably interpreted as a conflict of interest. However, the masses in Egypt as well as the rest of the middle east are growing increasingly restive.

The old games of propping up despots such as Baptista and Trujillo are in this age where internet is accessible to the men on the street and the students in the universities, is growing increasingly thin. Revolutions have never played out according to script.

In Russia, the Czar was overthrown only to be replaced by a small minority party called “The Bolsheviks”. In Germany it was the “Nazis”, that replaced the Weimar Republic. The Iranian revolution gave us the “Mullahs” instead of the Shah. The recent elections in Lebanon gave us the terroristic Hezbollah. What is to be the future role of the military that has for the past thirty years played a crucial behind the scenes role in preserving its own vast business interests? With Iran moving ships through the Suez the situation remains in flux. This a test of the Egyptian Military. The cards have been dealt and Egypt allowing the Iranian boats through the Suez, will show Israel the militaries hand and whose side they are truly on.

This morning the newspapers said that the military has already “begun taking steps to protect the privileges of its gated economy, discouraging changes…that are crucial if Egypt is to emerge as a stable and prosperous country. Protecting its businesses from scrutiny and accountability is a red line that the military will draw…And that means there can be no meaningful civilian oversight.”

Some other disturbing headlines in today’s papers are:

What does all this turmoil, restlessness and upheaval mean to us as investors? The message can not be clearer precious metals will assume a more salient role as time goes by. It is interesting to note that when tyrants depart they make sure that the gold they stole has preceded them. In Tunisia, the ousted leader Ben Ali made sure that he looted the government gold coffers before he left. In Egypt, Mubarek’s son Gamal was reported to have carried off large amounts of gold. We do not have to be weathermen to determine which way the winds of change are blowing in the Middle East. Precious metals will remain a viable store of wealth and a quasi-currency, especially if these riots turn violent. Already there are reports that protestors were fired upon in Bahrain. 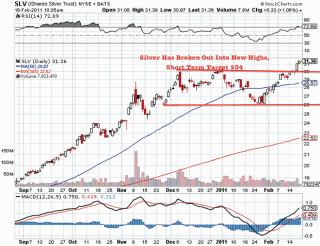 Silver has broken out of a six week consolidation into new highs and is currently showing incredible relative strength. This morning SLV made an ascending triple top breakout on the point and figure chart at $31. I believe we can start seeing another major leg higher and acceleration of the trend in precious metals. The physical demand is increasing in silver and it could continue its rapid rise higher since it is new high territory.

Gold is showing similar strength as it broke the 50 day moving average to the upside. Gold and miners reached oversold levels in January not seen in more than a year. Now many of the bears who sold out and expected a steeper correction will be returning pushing gold, silver and mining stocks into new high territory. This is the perfect storm for precious metal investors. Our buy signal on January 25th has proven to be a short term turning point and the break into new highs may look at that time as one of the best buying opportunities in years. To see the article I wrote in the middle of the panic, click here. Investors who did not trust the 2 year trendline, made a major mistake and sold out into the fear. Those times where fear reaches an extreme turn out to be the best opportunities.