Home Veterans All Points Alabama-Vietnam Vet Missing: He Cares-We Need to Find Him

Mike Campbell, A Vietnam veteran that cares in his soul his missing in Birmingham Alabama!  WE DO NOT LEAVE ANY VETERAN LOST!  FIND HIM!  Mobilize all veterans, Patriot Guard, troops off duty he needs to be found! 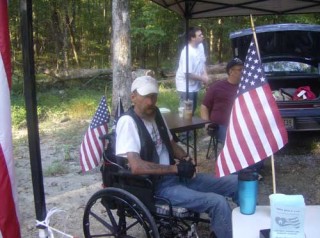 BIRMINGHAM, AL (WBRC) – Birmingham police and volunteers are still looking for Michael Campbell, a local disabled veteran of the Vietnam War. Campbell, who is 65, wheelchair-bound and reliant on an oxygen tank, was last seen Saturday in the 5700 block of First Avenue North in Woodlawn.

Campbell is a white male, 5’8″ tall, 130 pounds with hazel eyes and gray hair. He was last seen wearing a black leather vest with an American flag print, blue jeans and a long sleeve white shirt. Campbell runs a transition house for homeless veterans called “Three Hots and a Cot” at the St. Benedict’s Veterans Center.

According to Cindy Miller, one of the search volunteers who knows Campbell through the Patriot Guard Riders, Campbell left St. Benedict’s Saturday morning around 6 a.m. to go counsel the family of a veteran who had recently committed suicide. Miller says he was not expected to return to the center until 9 p.m. Saturday evening, and they are not sure whether he made it to the bus stop that morning and if so, where he got off. She said those who are looking for Campbell are concerned about his health and think he might be disoriented due to his oxygen tank running low.

Miller added that a woman reportedly spotted Campbell near the Jimmie Hale Mission and Birmingham Water Works area around 3 p.m. yesterday but did not call in the tip until around 7 p.m., after she saw a news story about the search for the missing vet.

The Birmingham Police Department is asking anyone with information about Campbell’s whereabouts or the case to contact them at 205-297-8445 or Crime Stoppers at 205-254-7777.