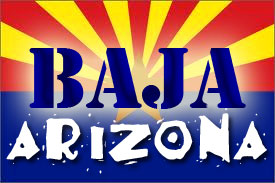 TUCSON, AZ – Some southern Arizonans are joining forces to push for the creation of a 51st state carved out of Pima County. The new state would be called Baja Arizona.

“I think once you take a step back and think about it, it starts to make more and more sense,” said co-founder of  “Start Our State”, Peter Hormel.

Organizers acknowledge there are big hurdles in creating Baja Arizona. They must first get on the ballot, then get approval from the Legislature or from state voters to allow the break off.

A new state constitution would have to be drafted and approved, plus they’d have to get the OK from Congress and the president.

Start Our State co-chairman Paul Eckerstrom tells the Arizona Daily Star at a minimum the drive to create a 51st state sends a message that Pima County doesn’t go along with priorities being outlined in Phoenix.

Hormel tells ABC15 the group thought something had to be done.

“I and some other people finally got so frustrated with what’s happening in Phoenix that we felt obligated to do something about it,” he said.

Meantime some, like Republican Pima County State Rep. Vic Williams, have taken a more light-hearted approach to the movement.  In a sarcastic tone he told ABC15 he would like all the Democrats in his area to make their own state.

“If somehow we can get them to secede and become their own state I would certainly take it seriously,” said Williams.