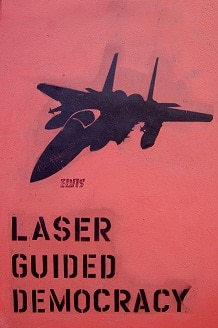 After  killing hundreds of thousands of Muslims in the name of democracy, the  White House has now decided that ‘stability in the region’ is by far,  much  more important.

On Saturday, The Wall Street journal  reported that the Obama administration is devising a new Middle East  strategy in the face of ongoing Arab world turmoil, preferring stability  over democracy for key allies in the region.

Here in Britain not  many people believed Bush and Blair when they preached democracy and  moral interventionism — And I guess that the new American strategy  cannot be taken at all seriously either.

Actually, I believe that  by now, the American ruling elite should just come clean and tell the  truth to the Arabs in the region: ‘listen you guys — all we want is  your oil. We don’t care what you do with your life, or what you believe  in; just keep the flow of this dark greasy lubricant stable.’

I  wonder; why is it so difficult for the American and British governments  to produce such a simple statement? After all; is not telling the truth a  Western value?

The report contended that the new American policy  is due to domestic U.S. criticism that the Obama administration had  sent mixed messages in the initial stages of the Egyptian uprising, and  that the ambiguity and confusion had led to the ousting of President  Mubarak, a longtime Western ally : The White House had tentatively  endorsed Mubarak’s leadership at the beginning of the protests — and  then switched allegiances, throwing full support behind the protesters,  who eventually overthrew the three-decade Egyptian president.

I  do not entirely agree that Obama had behaved in a confusing or  inconsistent manner — I think that the White House policy is, actually,  very coherent and very consistent, for it constantly bounces and swings  between backing the people, and then the tyrants. When the Americans  are convinced that the success of the revolution is immanent — they  support the people. But when they are certain that oppression and  tyranny will continue to ‘provide the goods’ (cheap oil) then they  simply go ahead and support their traditional undemocratic allies.

Surely  it is about time to state the obvious : It is not morality; it is not  values, and neither is it any ethical consideration that drives our  leaders.

Rather, it is sheer pragmatism, and relentless greed.