Libya has had to put up with too much from the Arabs for whom it has poured forth both blood and money. Muammar al-Gaddafi 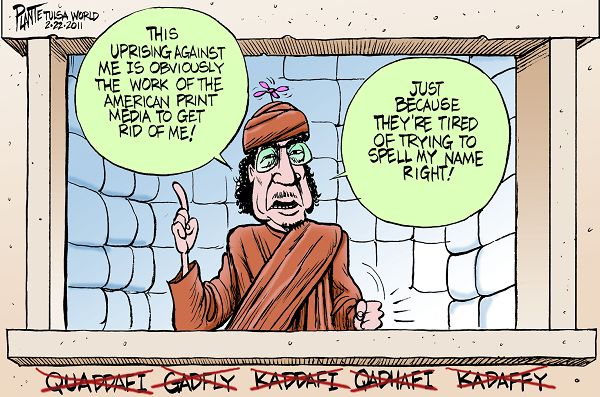 The struggle for control over oil resources is one of the most dominate factors in economic history. A timeline of the oil robber barons is compelling, especially when viewed from the perspective of muckraking Ida Tarbell. In the History of The Standard Oil Company, Tarbell influenced public opinion and provided pressure for government regulation of the oil monopoly. Martha R. Gore writes in The “Joan of Arc” of the Oil Regions Who Exposed Standard Oil, “In November 1906, the federal government took Standard Oil to court, charging it with obstructing interstate trade, a violation of the Sherman Antitrust Act of 1890. The result was the breakup of Standard Oil and the end of its power to destroy its competition and control of the American oil market”.

As any consumer knows, the sleight of hand show that broke up the Rockefeller companies did nothing to eliminate the oil empire of the baron’s. Yet, John D. emerges as the richest man in all history, according to the Business Insider, with a personal fortune of $336 billion. This amount is very deceptive when one peels back the onion and examines the myriad of layers that the internationalist’s banking system uses to conceal the trillions of wealth that they actually controlled. The days of Taylor Caldwell’s masterpiece, Captains and the Kings are long gone for the down trodden, but are still ripe for exploration by the barons of unfeigned dominance. Captains and the Kings tells a story of the real power behind the government. The Committee of Foreign Relations; shadowy men who make decisions that affect the world around them.

Muammar Muhammad al-Gaddafi is no Joseph Armagh. The History of Libya under Gaddafi is not a pretty picture. Colonel Gaddafi’s stewardship of Libya’s oil resources is not exactly a profile in courage. His record of rule shows no element of self-determination for the tribal subjects that suffer as the oil revenues flow and fund dubious adventures. Bad men come in different shapes, sizes and survival skills. Ruling for 41 years is no small feat, even in an authoritarian regime. However, does this mean that so many world leaders and influential politicians, who grovel at the feet of this strange mercurial and eccentric leader, accept him into their club of economic pillage? 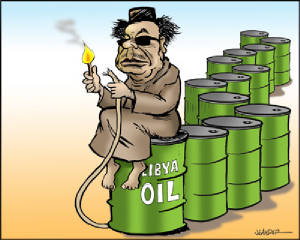 The Telegraph concludes in, The fall of Gaddafi could finish off Tony Blair, “One thing’s for sure: should the Gaddafi regime fall and its private papers start fluttering around Tripoli, the first thing British journalists will be looking for will be any documents carrying the name of Tony Blair”. Blair was called “Bush’s poodle“, but may well turn out to be Gaddafi’s “Bull Terrier” when it comes to his eagerness to distance himself from his close ties that propped up the tyrant’s Bedouin tent.

Not far behind is “neoconservative” Richard Perle. Jeffrey Goldberg in Atlantic writes, “The former Reagan-era Defense Department official and George W. Bush-era chairman of the Defense Policy Board, traveled to Libya twice in 2006 to meet with Qadhafi, and afterward briefed Vice President Dick Cheney on his visits, according to documents released by a Libyan opposition group in 2009”. Cheney has a long record in pulling strings.

“As CEO of Halliburton, and even as Vice President (prior to 9/11) Cheney supported relaxing sanctions on Libya and Iran so that companies such as Halliburton would be free to profit from their energy riches (regardless of the nature of the regime). Cheney admits to this and is even quite proud of it.

Now BP is being lambasted for seeking the release of convicted Lockerbie terrorist al-Megrahi. BP denies these accusations. Although distasteful to the victims of Pan Am 103, at least the U.S. and U.K. have diplomatic and somewhat friendly relations with Libya. Libya has renounced its WMD programs and is supportive of American law enforcement and counterterrorism policies.

Dick Cheney thought it was alright for his business (but not everyone else) to do business with pre-detente Libya and Iran, now and then, the world’s greatest state-sponsor of terrorism”.

Poodle Blair takes a back seat to Dick “Darth Vader” Cheney. None other than the current Secretary of State, HilLAIRy Clinton stated when she was a Senator.

The complicity of cooperation with Gaddafi goes way back. Debbie Schlussel reminds of the Carter connection.

“Ole’ Billy would be proud. A new group, the Washington based US-Libya Business Association (a fancy name for a group of lobbyists who whored themselves out to oil companies paying big bucks because they want to do business with the terrorist state), is pushing for the Bush White House and State Department to remove Libya from the State Department’s list of countries sponsoring terrorist groups. (Billy Carter took a “loan” of a few hundred thousand dollars from Libya’s loony dictator, Muammar “Daffy” Qaddafi, to do similar lobbying of his Peanut Farmer President brother.)”

The videos ‘US imperialism will push them into Libya’s war‘ and Gaddafi under world court investigation explain why he has overstayed his welcome and requires a kangaroo court to put him in a cell that was once occupied by Abdelbeset al-Megrahi. In an effort to ward off an imminent reprisal or prolonged sanctions on Libya, another fringe autocrat Hugo Chavez, the Venezuelan president, offers to mediate a resolution. Without giving further details of the proposed mediation mission, Chavez said it was better to seek “a political solution instead of sending marines to Libya, and better to send a good will mission than for the killing to continue”.

Robber Barons do not go begging for a reprieve. Since the early days of the oil cartel in union with the central bank finance cabal, the name of the game is to control the vital fluids of energy production and the funding or exclusion of the capital flow that turns fossil fuels into the engine of wealth manipulation.

From his extensive experience on this subject, Robert Fisk offers his assessment.

“It is only a matter of time, needless to say, before Gaddafi reminds Libyans that al-Qa’ida was a satellite of the very Arab mujahedin used by the United States to fight the Soviet Union in Afghanistan. Yet Libya’s own ferocious resistance to Italian colonization proves that its people know how to fight and die. In “Tripolitania”, Libyans were expected to walk in the gutter if Italians were walking towards them on the same pavement and Fascist Italy used aircraft as well as occupation troops to bring Libya to heel.

Unlike Tunisia and Egypt, however, the “People’s Masses” of Libya are a tribal rather than a societal nation. Hence two members of Gaddafi’s own family – the head of security in Tripoli and the most influential intelligence officer in Benghazi – were respectively his nephew, Abdel Salem Alhadi, and his cousin, Mabrouk Warfali. Gaddafi’s own tribe, the Guedaffi, come from the desert between Sirte and Sebha; hence the western region of Libya remains under his control.

Talk of civil war in Libya – the kind of waffle currently emerging from Hillary Clinton’s State Department – is nonsense. All revolutions, bloody or otherwise, are usually civil wars unless outside powers intervene, which Western nations clearly do not intend to do and the people of eastern Libya have already said they do not wish for foreign intervention (David Cameron, please note)”. 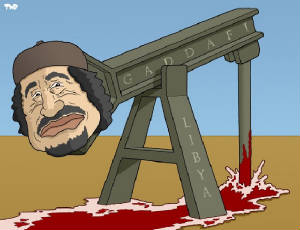 Is Mr. Fisk correct about Western nation’s intentions? Let’s hope so, but what about interference or intervention by the oil and banking robber barons? Gaddafi is no more a threat to the West than Hosni Mubarak was, and we saw just how long it took to remove him. Keeping the Suez Canal open and maintaining the oil exports to Europe is the common objective of the oligarchy.  The plutocrats need to keep their boots on the head of any dictator who dares to think they are independent of the global money interests. This message also applies to the leaders of “so called” civilized democracies.

The price of oil is being maneuvered to hit new all time highs. Middle East crises are fashioned to drive chaos into the need to surrender to a greater global dominance. No matter how you spell Gaddafi’s name, he is insignificant and disposable. His head on the end of a nodding donkey is just window dressing. The true criminals that escape real world court justice are the globalists and the definitive robber barons. The Rockefeller legacy produces a gulag world for the Captains and the Kings. Politics reveals that Oil Runs More Than The Economy. In the Oil Roustabout Economy the Gaddafi’s of the world are disposable grains of sand.

Discuss or comment about this essay on the BATR Forum