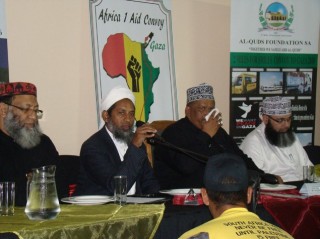 FEB 24 2011- Near the end of June this year the African continent will witness the historic crossing of the first land-based humanitarian aid relief convoy which will journey from Cape Town to the besieged and occupied Palestinian territory of Gaza.

The Africa 1 Aid Convoy an initiative spearheaded by the South African based Al Quds oundation and supported by a host of well-wishing civil society organizations and charities will aim to gather support and spread awareness about the plight of the Palestinian people as it journeys through Zimbabwe Zambia Malawi Tanzania Kenya Uganda Sudan gypt and finally into Gaza bringing much needed aid to the region.

The convoy is the brainchild of Moulana Igsaan Hendricks president of the Muslim Judicial Council anddirector of the Al Quds oundation SA. He says the trip was born out of a visit he made to the Gaza Strip in July 2010. It was during this trip that the idea of directing a land convoy from Africa to Gaza wasconceived after consultations with the leadership and other important role players in the territory.

The 1.5 million Palestinians who reside in the 40 km long Gaza Strip have been made to live without access to basic running water adequate healthcare medicine and other basic human rights.  or the past 43 years they have been under constant occupation and subject to inhumanities that closely resemble South Africa’s apartheid regime. The situation in the territory has worsened considerably since 2006 when Israel imposed a debilitating economic siege on the strip that effectively prevents much needed supplies from getting through. One of the most recent attempts to break the blockade was in May last year where Israel illegally attacked a flotilla of ships caring aid in international waters and caused the deaths of several activists.  It is hoped that the Africa 1 Aid Convoy will be more successful.

The convoy is expected to carry a range of humanitarian material as determined by the people of Gaza. This will be made up of electrical generators medical supplies water detoxification units stationery educational material and left hand drive vehicles.

The Africa 1 Convoy is scheduled to leave South Africa during the last week of June 2011.

A Johannesburg-based international satellite radio  station  CII roadcasting will be the official media partner of the convoy providing comprehensive and interactive coverage; from the initial preparationsand developments to the actual journey across the continent and finally until the aid has reached its destination. CII will provide exclusive unfettered access for a vast international audience keeping them informed at every step along the unique and remarkable expedition.