The regimes in Algeria and Syria have denied such allegations. 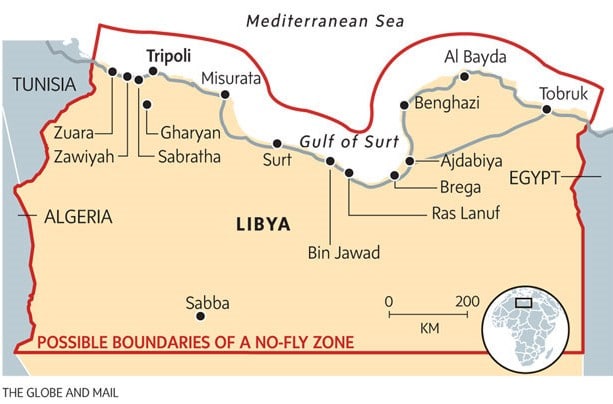 However, the rebels’ suspicions about an Algerian role, in particular, grew stronger in recent days they collected data from the air traffic control tower at Benina International Airport. The tarmac outside of Benghazi remains silent as the regime’s aircraft dominate the skies, but rebels have switched on radar and other monitoring systems. As an old printer grinds out reports about aircraft movement over Libyan skies, former pilots say they’re seeing a disturbing number of Algerian military flights to airstrips controlled by Col. Gadhafi.

The rebels are still struggling to get more recent data from their antiquated systems, but they supplied The Globe and Mail with records for 22 flights by Algerian aircraft to Libyan destinations between Feb. 19 and 26. Some are listed as passenger flights by Air Algerie, using civilian aircraft, but the majority are labelled “special flights” by aircraft bearing registration codes used by the Algerian military.

The records appear to show repeated flights by C-130 Hercules and Ilyushin Il-76, aircraft big enough carry battle tanks, from Algeria and within Libya. The destinations include small airports in Sabha and Surt, key forward bases for the regime forces now advancing on rebels in the east.

“The Algerians denied this very loudly, but they cannot deny this data,” said Gamal Elkour, a former flight engineer. “What did these planes carry? Fruits and vegetables?”

Algeria has described its role in the Libyan crisis as purely humanitarian, helping with evacuations. A senior Algerian official told Reuters last week that military support for the regime in Tripoli would be “absolutely inconceivable.”

Syria has also denied reports of involvement in the conflict. Local media in Damascus say the government has expressed outrage at reports on Al-Jazeera television about a Syrian boat carrying weapons and vehicles to Tripoli, and Damascus further denies reports of Syrian soldiers fighting alongside Col. Gadhafi’s forces.

Whatever the source, rebel commanders say their enemies now appear better equipped and organized. General Abdel-Fattah Younis, chief of staff for the rebel forces, said the regime’s weapons in the field now include R-17 Scud missiles.

“At the beginning, the momentum was good and we made really fast gains, but then he [Col. Gadhafi] started recruiting more mercenaries and bringing more armaments like the R-17 missiles and other heavy armaments,” he said. “What we’re trying to do now, is lure them into an area where we can even the fight.”

The tactical withdrawal seemed to be working well for the rebel forces on Sunday night, as they gave up the port of Ras Lanuf and but reportedly managed to ambush their enemies in the strategic oil town of Brega. Some reports of the evening battle suggested that dozens of pro-regime fighters were killed and captured.

As the fighting moves closer to the rebel headquarters in Benghazi, a palpable nervousness overtook the city, especially as cellphone networks blacked out for several hours in the morning. For the first time, rebel commanders spoke openly about what could happen if their forces are defeated and they must rely on the general population to resist Col. Gadhafi’s advances.

The Arab League supported the rebel call for a no-fly zone in a statement on Saturday, and recognized the council in Benghazi as the country’s legitimate government. Algeria and Syria reportedly offered dissenting views, perhaps nervous about dissent within their own borders.

“The ordinary people in Syria and Algeria are just like us,” said a rebel fighter, Mutaz El-Aukely, 29, smoking a cigarette on the waterfront in Benghazi. “They haven’t had their revolutions yet, and their leaders are afraid.”