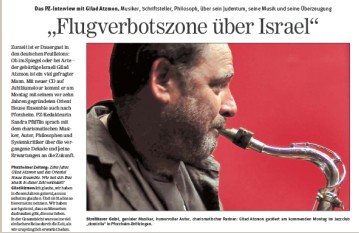 No Fly Zone over Israel- An Interview With Gilad Atzmon

Introduction by Gilad Atzmon: In the coming days I will write a summery of our German tour, but I can already confirm that the amount of press we received here is huge. Clearly, the German press and public are open to discuss issues to do with Palestine, Zionism and the role of Jewish Identity. Our movement is growing rapidly. All we need is to be brave enough to speak out.

Pforzheimer Zeitung: Ten years for the Orient House Ensemble – how has your music changed in this decade?

Gilad Atzmon: I think that we learned to believe in ourselves and to be slightly less conscious about it all. We learned that some people out there love us. In general it was a much easier journey than I would have expected.

Pforzheimer Zeitung: And how has Gilad Atzmon changed?

Gilad Atzmon: Due to my engagement with some issues to do with Palestine and a constant confrontation with Jewish lobbies, my personal journey wasn’t easy. But the reality on the ground proves that I was correct all the along. There is a massively expanding awareness of the Israeli brutality and a surge of antagonism against Zionist politics. In 2005-6 I was subjected to some extensive smear campaigns, I somehow managed to survive it. I am happy to be in great form and to see that the Tide Has Changed (which is also the name of our latest album).

Pforzheimer Zeitung: Speaking about your new record ‘The Tide has changed’ you proclaim, that “humanism is a metaphor, consciousness is the devil and amnesia is freedom“. Are you just being cynical?

Gilad Atzmon: Not at all, Humanism is indeed a metaphor, it is a reflection of our phantasmic image of goodness in us. Consciousness is, no doubt, the devil, it is a reflection of the West’s relentless attempt to know everything. It is really the biggest enemy of beauty. Amnesia, is obviously the ultimate form of liberation, it allows one to revise and reinvent oneself.

Pforzheimer Zeitung: Two tracks on the album have the titles “We laugh” and “We Lament” – what do you do more? And what do you prefer?

Gilad Atzmon: For me it is not a matter of preference, I am subject to those feelings and emotional states. I do not choose to lament or laugh, I am rather caught in these situations but my music may also be a dialectic battle between these two polls.

Pforzheimer Zeitung: Is this the Gilad Atzmon we know, when you say, that making music comes in first place? What became of your political engagement, your fight for freedom and the oppressed?

Gilad Atzmon: I am indeed primarily a musician, though I spend more and more time writing. To be a musician is to search while knowing that you may never find. As a writer, I borrow the same intellectual template. Unlike the clichéd Marxists who always know what is good and who is bad, I am much more excited about questioning. I am submerged in delight when I manage to formulate a new query.

Pforzheimer Zeitung: Turning 48 in June – have you become more docile?

Gilad Atzmon: I am afraid not. I have a special talent to cause a mess in no time. I am good at it, and I even get better as I age.

Pforzheimer Zeitung: Now that the Bush era is over, are you content with what came next?

Gilad Atzmon: Not really, for me politicians are all equally bad. I do not trust them, not even the ‘nice ones’. I somehow prefer to listen to artists who search for beauty.

Pforzheimer Zeitung: Do you think the Israeli-Palestinian-Conflict will be solved during your lifetime?

Gilad Atzmon: For the conflict to be resolved the Jewish state has to give up on its tribal supremacist ideology. In categorical terms, Israel is not different from Nazi Germany. It is ethno-centric and racially oriented, it is supremacist and expansionist. For the situation to be resolved, the Jewish state must go through a process of de-Zionification. I do not think that Israel will jump voluntarily into such a process. I believe that Israel better face a fierce wall of resistance. In fact today I launched a call to demand leaders to impose No Fly Zone on Israel. It is clear that there is no categorical difference between Gaddafi crimes against his people and Israeli crimes against the Palestinians

Pforzheimer Zeitung: What parallels do you see in your music and Black music?

Gilad Atzmon: I know that people compare me with some heroes of the Bebop and post bop era. I guess that for me music is more a matter of energy rather than knowledge. This fact alone makes me romantic and fierce. I guess that this is a quality you can hear in Bird, Coltrane, Cannonball, Dizzy, Miles and others. However, I find it too embarrassing to equate myself with these prophets.

Pforzheimer Zeitung: And what have you become in the last ten years: A British Jew, a Jewish Brit or none of these?

Gilad Atzmon: I am certainly British. When it comes to the ‘Jew’ question, I am bouncing constantly between the ‘proud self hating Jew’ and the ‘Ex Jew’. I cannot make up my mind and I own my contradictions proudly and openly.