Home Veterans War is hell, even if you survive 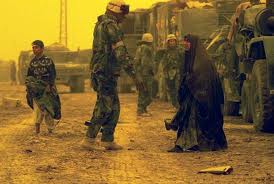 We were not asked to sacrifice anything. Not our money. Not our time to pay attention and not even asked to sacrifice our prayers. The general public was told to go shopping and the rich, well, they were told to keep more of their money and do whatever they wanted with it. War was important enough to start but not enough to fund. What kind of a message do you think this sent to the troops?
The deficit is estimated at $1.27 trillion in 2011 — down from a record $1.56 trillion in the current year.

How much is the war in Iraq costing us? wrote By John W. Schoen Senior Producer for MSNBC answer desk in October 2006.

Pretending Iraq and Afghanistan wars had nothing to do with this, is about as irrational as the politicians can get but then saying the budget for the VA needs to be cut instead of increased is just insane.

Then there are future costs that don’t show up in current appropriations, like the money needed to replace equipment that’s wearing out faster that it would if wasn’t being used in combat. And, since the government is running deficits — and borrowing to make up the difference — at least some of the interest on the national debt has to be added to the Iraq war bill.
If you add these costs, and others, to the total tab, the cost of the war has jumped from $4.4 billion to $7.1 billion a month since the 2003 fiscal year, according to a paper co-authored in January by Columbia University professor and Nobel-prize winning economist Joseph Stiglitz, an outspoken critic of the war. The paper estimates the total cost could top $1 trillion.

Now they can use the debt to excuse everything they want to do except admit they have no conscience at all. We’ve heard all their excuses for wanting to cut the debt rich people should be paying at the same time they want to cut everything every other American needs to survive but when they go after the wounded they created, they go too far.

None of them cared about the men and women sent to risk their lives. While Iraq and Afghanistan were important enough to send men and women to risk their lives, up until last year, they were not important enough to put them in the budget. Now politicians want to pretend they give a crap about the debt they contributed to. The President decides to send troops into combat but with the approval of congress and it is up to congress to find the money to pay for wars and wounded.

“Thank goodness at least Congress supports our troops, you say. Remember all those yellow ribbons? Well, some members do and some don’t, depending on their political affiliation. The Iraq and Afghanistan Veterans of America’s report card shows that 91 of the 94 lawmakers getting an “A” for helping vets were Democrats. Of the 154 receiving a “D” or “F,” 142 were Republicans. Public praise on camera doesn’t necessarily correlate with votes for financial support on the House or Senate floors.” Bill Collins

Eight years after troops were sent into Iraq for “six days, six weeks, I doubt six months” according to Donald Rumsfeld, they are still there. According to ICasualties.org there have been 4,440 US deaths in Iraq with 10 killed this year. Fast approaching ten years in Afghanistan, there have been 1,505 US troops killed with 59 this year.

03/18/11 WaPo:8 years after invasion , Iraq, US eyeing whether American forces will stay past year’s end
The American invasion of Iraq was supposed to take only a few months: a quick blitz to depose dictator Saddam Hussein, find and dismantle weapons of mass destruction and go home.

No one wanted to pay for Afghanistan or Iraq. We were told that the invasion and occupation of Iraq would pay for itself and that was fine with the American people but it didn’t. No one planned on taking care of any of the wounded these two wars would create. Now they act as if they are surprised people were wounded in war. Some politicians have gone so far as to say the VA budget needs to be cut because, after all, we have a deficit and “we shouldn’t pass on the debt to our kids” but they are so accomplished at spinning things around to get what they want, they forget we also have a debt to the kids we send to fight our battles in combat. They forget that for all their whining now about the debt, none of them wanted either war in the budget ahead of time. None of them wanted a true accounting on the price tag in terms of dollars, lives or wounded any more than they wanted a true accounting from the defense contractors spending the money in the first place. Anyone in the media asking any of these people about any of this?

This is not the final figure but some want to pretend the deficit has nothing to do with either military action. They just want to cut the budgets for regular people and cut the debt the rich need to pay.

The tour of duty comes with a known risk to their lives but coming home can be more deadly. The time they assume they will be risking their lives on each deployment is usually known ahead of time. For a tour of months or a tour of a year, they know what day they will be safely heading back home but few understand the danger to their lives has not ended just because no one is planting bombs to kill them or shooting at them. The enemy they have to really worry about hitched a ride inside of them.

If we stopped all wars today we would assume the casualty count would vanish. Just because their boots have left the place they were sent, it does not mean they have left it behind. The deaths in combat are only part of the true price of it. The American people want to forget all about it. The dollar figure used to pay for the war needs to be spent on other things. The dead have been buried. The wounded have been taken care of. The widows and orphans have all they need. At least that is what the general public thinks. All is well with the universe and they won’t be bothered anymore. The occasional news report on Iraq or Afghanistan will be taken up by something else. The local newspaper will stop reporting on another soldier’s body coming home. We don’t want to see any of it. We don’t want to see it during combat and we don’t want to see it after.

War is hell, even if you survive

Forget for a moment the death, devastation, deprivation, disease, displacement, and despair visited upon civilians in war zones. Let’s briefly contemplate the fate of soldiers. Ours, anyway. We really don’t know much about theirs except for the reported killings of “suspected militants.” And, “suspected militant” has come to mean anybody we happen to kill–man, woman, or child.

Our own casualty numbers are murky too. We eventually learn the total daily death count. But as U.S. soldiers meet their end each day, their numbers are mingled with NATO’s casualties, obscuring the number of Americans killed. Of course photos of the dead, dying, anguished, or their caskets are heavily restricted. So too are any frontline dispatches detailing gushing blood, dismembered limbs, hellish burns, or piercing screams. Censorship sanitizes all that.

Once vets return home, the charade continues. Military and VA hospitals, while far from glitzy, offer some of the best and most efficient medical care around–if your wounds are visible. But if the wound is to your mind, as most are these days, good luck. Many returned troops do receive permanent disability coverage and care, but just the lucky ones. Thousands more struggle to get appointments, struggle to get diagnoses, struggle to get treatments, and struggle to get disability awards.
read more here
War is hell, even if you survive

Do you know any people bothering to go to Walter Reed to visit the wounded? How about going to local VA hospitals to spend some time with them? Unless they have someone they know to visit, the sad truth is few take the time to go. Sure there are celebrities and politicians showing up with camera crews so they can “prove” how much they care, but everything else they do proves they just don’t really think about them at all.

No one wants to pay for any of this but what is worse is that no one wants to pay attention to it. When we fail to plan for the wounded when plans are made to send them, we lose, no matter what the outcome of the war is. The politicians should be ashamed every time they talk about a deficit because they didn’t care about the debt they owed the men and women they sent into combat.