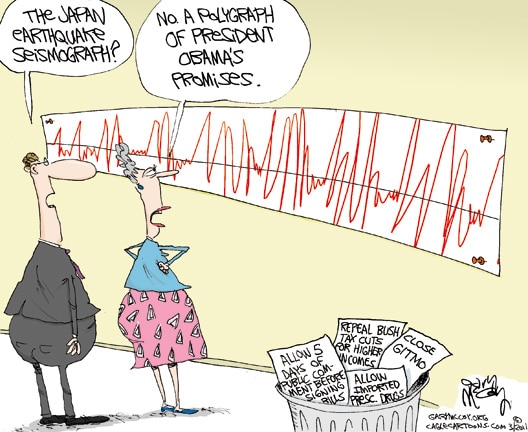 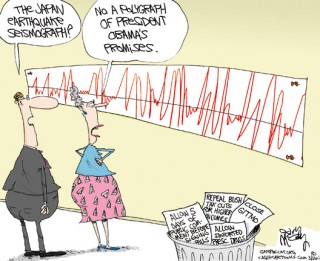 On December 7, 2007 Barack Obama said “The President does not have power under the Constitution to unilaterally authorize a military attack in a situation that does not involve stopping an actual or imminent threat to the nation” ~ another broken promise thrown into the trash can of history as President Obama orchestrates regime change in Libya under the guise of humanitarian intervention: Allen L Roland

Robert Greenwald, Reader Supported News, nails our current illegal pre-emptive action in Libya perfectly ~ “ President Obama’s decision to participate in the strikes in Libya has already cost US taxpayers “well over $100 million,” according to the National Journal. The Journal also relayed that, “the initial stages of taking out Libya’s air defenses could ultimately cost … coalition forces between $400 million and $800 million.” The administration launched this new war (and yes, it is a war) with no official congressional authorization, little public debate and with a vague, possibly even non-existent, endgame in mind. It’s as if the lessons of the last decade are completely lost on policymakers in the United States.” See story ~

It was Oscar Wilde who once said that “the true hypocrite is the one who ceases to perceive his deception, the one who lies with sincerity” and President Obama has become the master of hypocrisy who not only lies with sincerity but obviously chooses not to perceive his massive deceptions. Nobel Peace Laureate Obama has not only become Bush light but has now slid to the dark side and become Cheney light by endorsing the failed Cheney/Bush neo con imperialistic agenda which now flies under the Obama banner of humanitarian intervention. But what we really have here is Regime change under the guise of humanitarian intervention.

Make no mistake about this, imposing a No-Fly zone in Libya is an act of war entailing sustained military action as we are already witnessing. So now we have an illegal war and occupation of Iraq and Afghanistan joined to an illegal war and most probably an eventual occupation of Libya ~ where an impatient and greedy BP is already getting ready to drill for oil off the Libya coast.

Former progressive Congressman Alan Grayson rightfully calls it A Tactic in Search of a Strategy and writes ~ “But a no-fly zone? In the case of Libya, that’s a tactic in search of a strategy. The Yiddish word for it is “shmei,” roughly translated as aimless strolling around. A no-fly zone is basically just looking like you’re doing something to remove Gaddafi, at the cost of $60 million in a day (which was the cost of the first day’s worth of cruise missiles launched).The last time we tried this, in Iraq, we had to sustain it for 12 years. At enormous effort and expense. And it didn’t bring down Saddam at all. More fundamentally, a no-fly zone in Libya feeds the dangerous fantasy that every problem has a military solution. That the answer to the use of force is the use of more force. That if a hammer doesn’t drive that nail in, try a howitzer.”

Mathew Rothschild, The progressive, calls Obama’s Libya War Unconstitutional, Naïve and Hypocritical and writes “Our founders would be appalled that a President of the United States could launch the country into an armed conflict half a world away without a formal declaration of war by Congress, much less barely any discussion of it by the House or by the Senate….There is no consistent humanitarian standard for Obama’s war against Libya. None whatsoever. Obama has now pushed the United States to a place where we are now engaged in three wars simultaneously. He’s a man, and we’re a country, that has gone crazy on war.” Read article ~

And lastly we have our straight talking Congressman, and soon to be Presidential candidate, Ron Paul telling the truth about our latest affront to the constitution and asking the pertinent question of why are we spending over one trillion dollars a year to maintain a fading empire which still relies on military force versus cooperation to impose its will and values? Five minute video ~

Unfortunately, the successful hypocrite and their ignorant audience often go hand in hand. The only one who doesn’t get hurt in these continuing and costly misadventures is the Military Industrial Complex as Robert Greenwald reminds us ~ “ But hey, just remember the silver lining: Every time a Tomahawk cruise missile blows up a building in Libya (and everyone inside it), war-profiteer Raytheon makes $1.5 million.”


About the Author:  Allen L Roland is a Freelance Alternative Press Online columnist and psychotherapist. Allen is also available for comments, interviews, speaking engagements and private consultations. Dr. Roland is a practicing psychotherapist, author and lecturer who also shares a daily political and social commentary on his weblog and website www.allenroland.com . He also guest hosts a monthly national radio show TRUTHTALK on www.conscioustalk.net