Indeed, a short list of Israeli massacres runs to 57, and those are just the major ones.

Given such a consistent pathological pattern, what are the odds that the estimated 773 civilians who died in the invasion of Gaza were killed accidentally, just collateral damage? 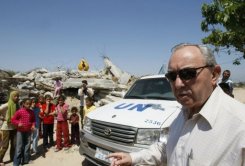 It will be recalled that after the September, 2009 issuance of the Goldstone Report suggesting that Israel might be guilty of war crimes, Judge Richard Goldstone was barred from attending grandson’s bar mitzvah. That is how much resentment was produced by the critical report that bares his name. Well, Richard Goldstone has just assured himself access to all future family celebrations. He has accomplished this by calling into doubt his offending investigatory work.

In a Washington Post op-ed, “Reconsidering the Goldstone Report on Israel and War Crimes,” published on 1 April 2011, Judge Goldstone declared that new information coming from Israeli investigations, allegedly conducted “transparently and in good faith,” now indicate (at least to him) that “civilians were not intentionally targeted as a matter of policy.” Since there was no policy of targeting civilians, all of the non-combatant victims (the Israeli human rights organization B’Tselem tells us that of the 1,387 Palestinians killed in the invasion, 773 were civilians) become mere “collateral damage.” Voila! Israel is off the hook when it comes to the charge of war crimes. Or so Goldstone now believes.

But hold on a moment. In a thorough analysis of Judge Goldstone’s new position, Adam Horowitz, writing in Mondoweiss, turns things around once more. Horowitz points out that since the Goldstone Report, which was admittedly a preliminary document, there have been other investigations by the UN Human Rights Council and the UN Committee of Independent Experts (CIE). These inquires suggest that Goldstone’s faith in Israel’s investigations is seriously misplaced.

For instance, in his Washington Post op-ed Goldstone cites a major case where Israeli forces killed 29 members of the al-Simouni family. This was an important piece of preliminary evidence of a possible war crime sited in the original Goldstone Report. He now tells us that an Israeli investigation has shown that it was all a mistake, “an erroneous interpretation of a drone image.” Further, Goldstone is now “confident that if the officer [who misread the drone image] is found to have been negligent, Israel will respond accordingly.” There are, of course, several problems with this position.

1. Israel’s so-called investigations into the Gaza invasion were episodes of the IDF investigating the IDF. Exactly the same so-called investigative procedure Israel used after its illegal attack on the Mavi Marmara. These “investigations” were not “transparent” because they were not public. Nor did the Israelis share the nature of their evidence with outsiders. As Horowitz points out this way of conducting business is not episodic, but rather official standard operating procedure. It is a reflection of structural problems, mostly having to do with obvious conflict of interest issues, that make Israel presently incapable of carrying out an objective investigation of its own actions. It must be noted that the original Goldstone Report had pointed to these problems. In paragraph 1756 the Report stated “The Mission found major structural flaws that in its view make the [Israeli investigatory] system inconsistent with international standards….there is the absence of any effective and impartial investigation mechanism and victims of such alleged violations are deprived of any effective or prompt remedy.” Nothing has changed on this account since the issuance of the Goldstone Report except that Judge Goldstone has ceased to see the situation as a problem. This leaves Horowitz, and no doubt many others, puzzled. “Why Judge Goldstone is now ignoring this issue is unclear.”

2. The Israeli findings in the specific case mentioned above are contradicted by the investigation of the CIE. That finding indicates that there is suggestive evidence that a senior Israeli military commander purposely targeted an area in which he knew civilians had congregated. He knew it because he had been informed by his own ground units that they had ordered a number of civilians to that location. Using the drone photos as justification he went ahead and called in an air attack on the site anyway and then kept ambulances from approaching the scene. Was this just the action of a rogue officer operating in contravention of policy? Almost certainly not. According to Israeli media reports, an IDF “special command” investigation of the incident carried out ten months later found that the air attack happened after a “legitimate interpretation of drone photographs” and “there had been nothing out of the ordinary in the strike.”

The key words in the Israeli “special command” report is “nothing out of the ordinary.” The behavior of the Israeli military during the January 2009 invasion of Gaza cannot be abstracted from the entire history of Israeli aggression against Palestine, its inhabitants and surrounding Arab lands as well. Indeed, that behavior has been remarkably consistent–so consistent that it is virtually impossible to see any particular manifestation of it as accidental. Was Dair Yasin (1948) an accident? Was Sabra and Shatila (1982) an accident? Was the shelling of west Beirut (1982) an accident? Was Qana (1996) an accident? Is the on-going inhumane and illegal blockade of Gaza an accident? The answer to all these questions is no. They were all done under officially rendered orders. Indeed, a short list of Israeli massacres runs to 57, and those are just the major ones. Almost all of them were neither accidental nor rogue operations. Given such a consistent pathological pattern, what are the odds that the estimated 773 civilians who died in the invasion of Gaza were killed accidentally, just collateral damage?

Part II – Prime Minister Netanyahu Says ‘I Told You So’

One suspects that Israeli Prime Minister Benjamin Netanyahu had advanced notice of the Goldstone letter. Within a very short time after the letter appeared he was calling on the United Nations to retract the original Goldstone Report. “Everything we said proved to be true. Israel did not intentionally target civilians and it has proper investigatory bodies.” Defense Minister Ehud Barak simultaneously declared, “We always said that the IDF is a moral army that acted according to international law.”

What a convenient combination of events! Israel investigates itself, exonerates itself, gets its biggest name critic to buy the procedure as legitimate and then back off his criticisms. The only question left is how many others will also buy into what really looks like a prearranged set up? My guess is every single country which wants to get around the issue of Universal Jurisdiction (see my analysis on this subject dated 12 February 2011) will soon be quoting Goldstone’s op. ed. as if it is a legal document.

While Judge Goldstone praises Israel for its “investigations,” he chastises Hamas for its lack of inquiry. Goldstone tells us that “Hamas has done nothing.” Well, at least we can say that Hamas has thereby refrained from insulting our intelligence with mock investigations leading to predictable if dubious self-exoneration.

Goldstone approaches the acts of Hamas and those of Israel as if they are on a par. He tells us that “The laws of armed conflict apply no less to non-state actors such as Hamas than they do to national armies.” At least in the case of Israel, such an approach denies context. Historically, the violence of the oppressed tends to rise over time to the level of the violence of the oppressor. That is what has happened in Israel-Palestine. It is not the Palestinians who have set the standards for violence in this conflict. That role has been played by the Israelis. As the list of major massacres cited above suggests, long before their was ever a suicide bombing or an attack with small rockets lacking guidance systems, the Israelis were massacring Palestinians, stealing their land and generally evicting them from their country. In some ideal moral world, Richard Goldstone’s conclusion that the violence of the oppressed must be judged by the same criteria as the violence of the oppressor might make sense. Unfortunately, it does not do so in the real world we have created for ourselves.

Richard Goldstone has always had a deep attachment to Israel. Thus it stands in his favor that throughout most of the time he led the UN investigation into the 2009 Israeli invasion of Gaza he maintained a level of objectivity which made possible a glimpse of just how brutal the Zionist state is. It is no secret that since the Report’s release Goldstone has come under much pressure to alter his views. He has been accused of everything from “perpetuating a blood libel against Israel” to singlehandedly supplying Israel’s enemies with their most influential document. As suggested at the beginning of this analysis, some of this reaction led to his being ostracized by friends and family. Now 75 years of age and at the end of his career, it would seem that Judge Goldstone has made the decision that he does not want to be remembered as a important critic of Israel. He wants to come in from the cold and so he has begun to make amends. I am afraid he will find this a difficult task. People in Goldstone’s position, who change directions in this way, tend never to be trusted again–by either side of the struggle at issue. This is so even if the change is justified, which in this case it is not. So Richard Goldstone has dug himself a deep hole at the bottom of which he is likely to dwell alone.

ABOUT THE AUTHOR: Dr. Davidson is the co-author of A Concise History of the Middle East and author of America’s Palestine: Popular and Official …Read Full Bio
More posts by the Author »