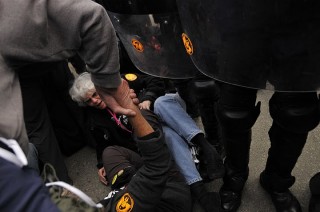 By Kevin Zeese (from OPED News)

“I do solemnly swear that I will support and defend the Constitution of the United States against all enemies, foreign and domestic; that I will bear true faith and allegiance to the same.” Soldiers Oath

On March 20th, Americans, in a vet led assembly, gathered to support PFC Bradley Manning who is accused of leaking documents to WikiLeaks and who has been held in solitary confinement at the Quantico Marine Base for 7 months. We worked successfully with the Prince William County Police for a safe and peaceful event, but one aspect of the event was in dispute — a veteran led flower laying ceremony.

It seemed like something that should not have been controversial — a ceremony to remember the war dead at a replica of the Iwo Jima Monument. The monument is open to the public every day of the year, but the Marines insisted on closing it to prevent a flower laying ceremony by veterans. We wanted to remember the war dead and emphasize that transparency saves lives as deception has been the basis of so many wars.

The Iwo Jima Memorial, also known as the U. S. Marine Corps War Memorial, is dedicated to all personnel of the Marines who have died defending the United States since 1775. The saying “Uncommon Valor Was a Common Virtue” is on the memorial and refers to the strength of mind and spirit that was shown by Marines in World War II who encountered danger with firmness. Bradley Manning, if he is guilty of what he is accused, has shown uncommon valor by sharing documents that show crimes and other misdeeds by the U.S. military and State Department. The inhumane treatment he is receiving is proof of the courage he has shown .

I wrote two memoranda to Colonel Daniel J. Choike, the Quantico Base Commander prior to March 20th. In them I explained our intent, the constitutional rights we were exercising and offered to find a way to exercise our rights safely. I concluded both memos saying “We ask you to please work with us in good faith and dignity to make this event work as it should under the Constitution, statutes and laws we all honor and respect. I stand ready and willing to work with you or your representatives, to make this work appropriately, and may be contacted for this purpose at any time, day or night, in furtherance of that goal.” We received no response from the Marine Command. The one time I called the Marines, I was told the monument is open every day of the year but would be closed because of our presence.

On the morning of the assembly, the Prince William police offered a compromise: we could send five people to the monument to lay flowers on the memorial. While some among the Bradley Manning supporters were unhappy with this compromise, we decided to accept it in order to have a peaceful event that allowed us to show our respect for those who have died in war. In the end, the police allowed six people to approach the monument with flowers.

Among the six were two who had been awarded the Purple Heart, one from World War II and the other from Iraq. Jay Wenk, an army veteran received the Purple Heart when he was a member of the 90th Infantry Division, part of Patton’s 3rd Army in Germany. His company got into a firefight in a heavily wooded area, a grenade fragment clipped his right shin, and the medic cleaned and bandaged it. The next morning after sleeping outside Wenk was in great pain, he’d contracted pneumonia and pleurisy. He was sent to a hospital west of the Rhine and rejoined his detail three weeks later. Most of his comrades had been killed while he was away when they were caught in the open by two German planes.

Zack Choate served as a scout with the Army’s 10th Mountain Division in southern Baghdad. He received a Purple Heart after being wounded by a roadside bomb in October 2006. He was riding in his vehicle on a combat patrol when a roadside bomb detonated, ejecting him from the gunner’s turret. After returning to the U.S. for treatment, he was awarded the Purple Heart. He was also diagnosed with PTSD. Out of a sense of “guilt” and other institutional pressures, he returned for a second tour.

Others in the flower laying group included: Retired Colonel Ann Wright who had a 29 year career in the U.S. military and also served 16 years in the Foreign Service. She served as Deputy Chief of Mission of US Embassies in Sierra Leone, Micronesia and Afghanistan and resigned in 2003 when the Iraq War began. There was also retired Marine Captain David C. MacMichael, the former commander of Headquarters Company at Marine Corps Base Quantico, in Virginia, a counter-insurgency expert in South-East Asia for four years who went to the CIA after his military career. Daniel Ellsberg left Harvard in 1954 to join the Marines and graduated first in a class of almost 1,100 lieutenants at the Marine School in Quantico. He served as a platoon leader and company commander in the Marine 2nd Infantry Division. In 1959 he began work at RAND, a private military think tank. He served in the Pentagon and reported the Gulf of Tonkin incident to Secretary Robert McNamara. He then served two years in Vietnam as a civilian working for General Lansdale. Ellsberg is most known for leaking the Pentagon Papers which undermined the rationale for the Vietnam War. The final member of the group was Elaine Brower, the mother of a Marine recently returned from his third deployment, 1 in Afghanistan and 2 in Iraq. She is an activist against the war with the National Steering Committee of World Can’t Wait and a member of Military Families Speak Out.

As the flower laying delegation approached the monument they were told to stop at a police barrier 20 feet from the memorial. The memorial was too far away to even throw the flowers on to it. The delegation was disappointed. Jay Wenk told me that “when we came up to the barriers and were told to put our flowers on the ground, that we could go no further because “that’s Federal land’ I felt shocked, angry and despairing of what our government is.” Zach Choate said he “was furious and hurt” Ann Wright decided to sit down on the road in protest, Daniel Ellsberg joined her. Then people came out from behind the police barricade and into the streets.

Police showed how much force they were willing to use to prevent vets from laying flowers on a war memorial. Riot police started to march down the hill. Dressed like Imperial Guards in Star Wars, 30 of them stood shoulder-to-shoulder covering the width of a four-lane road carrying large shields, wearing black helmets with plastic over their face in most cases only the eyes could be seen and many of them were covered by sun glasses, body armor covering their chest and arms, knee pads, shin guards and heavy boots. Behind them were an equal number of riot police without shields but similarly dressed. There were about a dozen SWAT team troops with large assault rifles, wearing green military-like clothing and also helmets with masks that hid their faces. There were eight police on horseback, the horses also wearing riot gear covering their face with plastic and the police troops riding them were wearing helmets and riot gear as well. They were accompanied by police with police dogs, two buses and an armored vehicle. There were numerous other police from Prince William County, Manassas and Quantico.

Five different police forces were involved in responding to the flower laying threat. Quite a show of paramilitary force to stop a flower laying ceremony by five vets and a military mom!

There was no violence from the peace protesters who had all pledged to be non-violent at the event. Some of the protesters were treated roughly by the paramilitary police.

Paramilitary police push forward knocking people on top of each other. Photo by Ellen Davidson

Even the horse were wearing riot gear. Photo by Ellen Davidson.

What was the root cause of this expensive and unnecessary show of force? The Marine Command insisting that vets could not lay flowers at a public war memorial. Did they forget their oath? Perhaps the most important part of the U.S. Constitution is the First Amendment which protects Freedom of Speech, Assembly and Petitioning the government. The language is clear: “Congress shall make no law . . . abridging the freedom of speech . . .; or the right of the people peaceably to assemble, and to petition the Government for a redress of grievances.” Rather than defending the Constitution, the actions of the Quantico Marine Command are undermining critical constitutional guarantees and violating the soldier’s oath.

Daniel Ellsberg with Paramilitary Unit as he is arrested for attempting to lay flowers in an “unlawful assembly.” Photo by Ellen Davidson

As a result of the events on the 20th, 32 people have been arrested. Daniel Ellsberg said when the magistrate told him the charge was “unlawful assembly” he thought: “Unlawful assembly ? I thought of that as a pre-Revolutionary charge: “Disperse, ye rabble! Go to your homes!’ I was under the belief that the First Amendment–protecting the right “peaceably to assemble to petition for redress of grievances’ was supposed to “change all that.’ Could there be a clearer description of what we were doing–right at the immediate site of one of the grievances? Granted, we were in a highway: but the State Police had blocked off that road themselves, for the period of our assembly : we weren’t even “disrupting traffic.'”

Now, it goes to the Prince William Courts. It will be an opportunity for the courts to enforce and protect the most basic constitutional rights of Americans, or an opportunity to turn those guarantees into a farce. Let’s hope the courts side with the people and the Constitution or the shock troops at Quantico could become a model seen in other parts of the country.