Home World What Martin Luther King, Jr. Could Have Said to Netanyahu and US 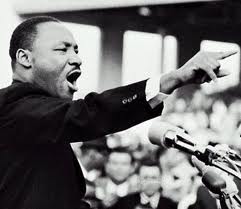 Among the 15 boats that will sail to Gaza with people from over 22 countries is the American craft aptly named, The Audacity of Hope. Crew and supporters are calling for an end to the occupation of Gaza Palestine which has become more a siege on universal rights and a chronic dependency on humanitarian aid.

The Audacity of Hope could also be navigating in the same international waters off of Gaza where 44 years ago this June 6th the USS LIBERTY was attacked by Israel at the start of the Six Day War.

On 25 March 2011, Israeli Prime Minister Netanyahu told the UN Chief that “the flotilla is being organized by extreme Islamists that are interested only in provocation…the ship’s key goal is to fuel tensions, particularly in light of the fact that the Gaza Strip is open to all types of goods brought in via land…”[1]

Because King read his Bible along with his newspaper, in this season of MLK reflections, I imagined that King could have had the following ‘conversation’ with Prime Minister Netanyahu, and so, I have taken the LIBERTY to interweave the news of today with quotes from King’s speeches:

MLK: Prime Minister, Bibi, baby, I have got to tell you that Israel’s publicity campaign aimed at stopping the International Freedom Flotilla set to sail this spring is dead before arrival. Look who you are calling terrorists now:

Bibi, c’mon, these activists are also committed citizens of conscience and the Americans onboard The Audacity of Hope will strengthen the ties of civil society and human rights groups whose bottom line is justice for the coastal strip and that equates to nothing less than full freedom and universal rights.

Bibi’ c’mon, you have 1.5 million Palestinians and 800,000 of them are under the age of 16, packed in Gaza. The Arab Revolutions are being driven by the youth of the region and they will not sit back down or be pushed around anymore.

“Oppressed people cannot remain oppressed forever and if repressed emotions are not released in nonviolent ways, they will seek expression through violence; this is not a threat but a fact of history.”

So what; you took down the Facebook page, Third Palestinian Intifada, which called for another uprising on May 15th and was ‘Liked’ by more than 350,000 people before it was banned.

You cannot ban an idea and an idea whose time has come is more powerful than bullets and bombs.

So what; that the Israeli Defense Force has special units to ‘monitor’ foreign nationals opposed to its policies, including the flotilla. The flotilla illuminates the collective punishment of the Israeli blockade and siege upon the people of Gaza. The people of Gaza are neither Hamas or Fatah; they are mothers, fathers, children all enduring under brutal conditions that are aided and abetted by USA foreign policy and American’s tax dollars, and thus I cannot be silent in the face of another train wreck!

The Third Palestinian Intifada called for 1 million supporters to unite after Friday prayers on May 15, 2011. So what; you banned them from Facebook. They all have cell phones and TWITTER and more powerful than bombs and bullets is a will wed to desire to be free and equal.

In 1967, I called the United States “the greatest purveyor of violence in the world today.” In 1967, I also wrote, “Peace for Israel means security, and we stand with all our might to protect its right to exist, its territorial integrity. I see Israel as one of the great outposts of democracy in the world, and a marvelous example of what can be done, how desert land can be transformed into an oasis of brotherhood and democracy. Peace for Israel means security and that security must be a reality.” [2]

It was also in 1967, on the 6th of June, that out of a crew of 294, thirty-four Americans were killed, 171 wounded and all scarred for life because the USA Government failed to support those troops.

The LIBERTY will not-cannot fade quietly away and the flotilla will dredge up many memories. Such as the fact that a few years back, Lieutenant Colonel Shmuel Kislev, the chief air controller at general headquarters in Tel Aviv, confessed that he knew the U.S.S. LIBERTY was an American ship as soon as an Israeli pilot radioed in its hull numbers.

Two months before the sailor’s mass burial at Arlington Cemetery, Navy analysis also uncovered that the Israeli torpedo boat gunners targeted the spy ship with 40-mm tracer rounds and they were MADE IN THE USA!

Did you know that in 1967, a voice of wisdom rose up in strife on the floor of The House, but he was shot down by cowardly silence.

Republican representative from Iowa, H.R. Gross asked, “Is this Government now, directly or indirectly, subsidizing Israel in the payment of full compensation for the lives that were destroyed, the suffering of the wounded, and the damage from this wanton attack? It can well be asked whether these Americans were the victims of bombs, machine gun bullets and torpedoes manufactured in the United States and dished out as military assistance under foreign aid.” [3]

By November 1967, lawmakers were willing to spend six million USA tax dollars to build schools in Israel and during the debate, Representative Gross again spoke the voice of conscience and introduced an amendment that “not one dollar of U.S. credit or aid of any kind [should] go to Israel until there is a firm settlement with regard to the attack and full reparations have been made [and Israel] provides full and complete reparations for the killing and wounding of more than 100 United States citizens in the wanton, unprovoked attack…I wonder how you would feel if you were the father of one of the boys who was killed in that connection-or perhaps you do not have any feelings with respect to these young men who were killed, wounded and maimed, or their families.” [IBID]

Gross’s idea is another whose time has come.

While I lived the FBI placed wiretaps on my home and office phones and bugged my hotel rooms.  By 1967, I had become the country’s most prominent opponent of the Vietnam War and a staunch critic of U.S. militaristic foreign policy that has aided and abetted Israel’s lust for land and control over the other.

Prime Minister Netanyahu, you are cognizant of the interrelatedness of all communities and states. Are you also aware you stand at the crossroads of Statesmanship or Status Quo Obscurity?

I cannot sit idly by and not be concerned about what happens in Israel Gaza Palestine, for I pay my taxes and they go to continue the occupation of an indigenous people and in good conscience I cannot do that. In good conscience I admit America has never been an honest broker for Peace with Justice in the so called holy land which is in pieces!

“Injustice anywhere is a threat to justice everywhere. We are caught in an inescapable network of mutuality, tied in a single garment of destiny. Whatever affects one directly, affects all indirectly. Never again can we afford to live with the narrow, provincial ‘outside agitator’ idea. Anyone who lives in the world can never be considered an outsider anywhere within its bounds. In any nonviolent campaign there are four basic steps: collection of the facts to determine whether injustices exist; negotiation” and I now add examining one’s motives and acting on conscience with direct action.

“Nonviolent direct action seeks to create such a crisis and foster such a tension that a community which has constantly refused to negotiate is forced to confront the issue. It seeks so to dramatize the issue that it can no longer be ignored I am not afraid of the word ‘tension.’ I have earnestly opposed violent tension, but there is a type of constructive, nonviolent tension which is necessary for growth.”

“Lamentably, it is an historical fact that privileged groups seldom give up their privileges voluntarily. We know through painful experience that freedom is never voluntarily given by the oppressor; it must be demanded by the oppressed. We must come to see that ‘justice too long delayed is justice denied.’

“Segregation [Translates to Apartheid in Afrikaner] distorts the soul and damages the personality. It gives the segregator a false sense of superiority and the segregated a false sense of inferiority. Segregation, to use the terminology of the Jewish philosopher Martin Buber, substitutes an ‘I it’ relationship for an “I thou” relationship and ends up relegating persons to the status of things.

“Hence segregation; apartheid, conscription and military occupation is not only politically, economically and sociologically unsound; it is morally wrong and sinful. Paul Tillich has said that sin is separation. Is not segregation an existential expression of man’s tragic separation, his awful estrangement, his terrible sinfulness?

“One who breaks an unjust law must do so openly, lovingly, and with a willingness to accept the penalty. I submit that an individual who breaks a law that conscience tells him is unjust, and who willingly accepts the penalty of imprisonment in order to arouse the conscience of the community over its injustice, is in reality expressing the highest respect for law. Everything Adolf Hitler did in Germany was legal and it was illegal to aid and comfort a Jew in Hitler’s Germany.”

So, Bibi, did you see Mordechai Vanunu’s comment regarding the law the Knesset passed last week to strip particular Israelis of citizenship?

Vanunu wrote, “Israel’s parliament has passed a law that allows courts to revoke the citizenship of anyone convicted of spying, treason or aiding its enemies.  No loyalty no citizenship, Freedom Now! Now they can take my citizenship and send me totally free from Israel. Freedom Now!” [4]

On 28 March 1988, Mordechai Vanunu was convicted by an Israeli court for treason and espionage, and sentenced to 18 years in prison. Under your new law Vanunu should be the first deported back to Morocco.

On April 21st it will be 7 years that Vanunu has been denied his right to leave Israel. The longer Israel holds him the greater his legend will grow, and as Dylan sang, “you don’t need a weather man to see which way the wind blows.”

Bibi, the cover is blown on Israeli authorities who are intent on silencing dissent from within and without. Gandhi said; first they ignore you- then they laugh at you-then they fight you-then you win- but that takes time.

The good news is that the times have a’changed and nobody and no government can stop a train of values rooted in international law and human rights driven by the power of nonviolent people seeking universal rights and freedom for all.