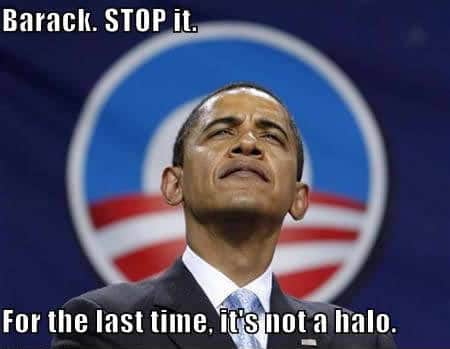 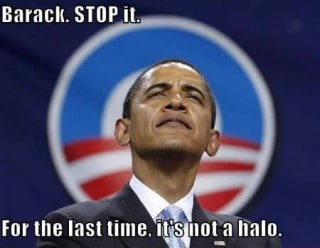 President Obama will become the first Billion dollar candidate running on a Platform of Corporate Welfare You Can Believe In ~ but the hard reality is he has no halo, no base and a raft of broken promises which no amount of money can cover up: Allen L Roland

Having run over and all but dismissed his progressive base, which elected him in 2008, an increasingly arrogant President Obama has consummated his marriage with his new base ~ Wall Street and the global financial elite ~ and has announced his re-election with e-mails and text messages to his supposedly loyal supporters. Obviously, this would allow him to start campaigning and tap into potentially a billion dollar war chest from big money corporate donations he has often criticized in the past.

Obama will inevitably lose many of the individual donors who backed him four years ago, said Anthony Corrado, a professor of government at Colby College and expert on campaign fundraising.”That’s something that we’re not going to see this time around, that level of excitement about the Obama candidacy that we saw last time, from people who are not traditional donors or traditional Democratic primary voters,” he said.

As a former Obama supporter I received his email message and two minute video http://www.barackobama.com/  which announced “President Obama’s campaign is just kicking off ~ We’re opening up offices, unpacking boxes, and starting a conversation with supporters like you to help shape our path to victory. 2012 begins now, and this is where you say you’re in.”

And this is where I am proud to say, along with millions of disappointed Americans who drank the Obama Kool Aid of broken promises that I’m Out and will actively work to not only promote an alternative progrssive Democrat or Independent candidate in the Presidential primaries but will also actively work against Obama’s re-election.

Obama has no idea that the millions of volunteers, which included me, who supported his first run for office in 2008 were energized by the desire for true change and saw Obama as an agent for that fiercely desired change from the Bush/Cheney decade of sleeze and ineptitude. It was an organic home grown movement that began in 2007 and continued to gather momentum through the campaign but that coalition of African Americans, Latinos, young people, women, college educated white voters, Seniors and progressives atrophied when it realized that the change they voted for rapidly became the status quo or Bush lite. Campaign promise after campaign promise was broken by Obama who arrogantly dismissed his progressive base and revealed that his true allegiance had always been with Wall Street and Main Street be damned.

It was a betrayal that his progressive base and Main Street will never forget but Obama still is seemingly basking under a non-existent halo of change we can believe in ~ while the hard reality is he is a billion dollar candidate running on a platform of corporate welfare you can believe in.

A new IBOPE Zogby Survey finds a majority of likely voters are ready for someone new in the White House, as just 38% say Obama deserves to be re-elected and 55% say it is time for someone new. The poll of 2,125 voters was conducted from April 1-4, 2111.

For the last time, Barack ~ it’s not a halo you’re wearing and that hard reality along with your broken promises and non-existent base will soon become obvious to you and your corporate minders.

A recent Rasmussen Poll confirms that persistent anger from an increasingly economically oppressed and frustrated electorate ~ On energy policy, a topic with significant economic implications, just 38% believe the president is doing a good or an excellent job. With gas prices rising dramatically, opposition to his continuing ban on oil drilling off the Eastern seaboard and in the eastern portion of the Gulf of Mexico is up to 55%. As for the president’s signature initiative, a majority of voters have consistently favored repeal of the health care law since it was passed by Democrats in Congress over a year ago. Not only has the president’s agenda to date done little to move the economy, but after two years of unpopular bailouts, stimulus proposals and the national health care plan, 69% of Likely U.S. Voters remain at least somewhat angry with the current policies of the federal government.  That figure has run as high as 75% since September 2009.”

Jon Stewart hilariously and rightfully lampoons Obama’s re-election announcement in this 4 minute video ~ Jon Stewart on Obama 2012 Campaign: “How Did We Go From ‘Yes We Can’ to ‘Ya Know, Whatever’?”

Stewart mocks the “stunning” news that President Obama will run for reelection in 2012 and critiques Obama’s first campaign video. “Those were the best people you could come up with for your opening campaign video? They’re all exhausted,” Stewart joked. “How did we go from ‘Yes we can’ to ‘Ya know, whatever’?”

OBAMA STATEMENT: “These negotiations will be on C-SPAN, and so the public will be part of the conversation and will see the decisions that are being made.” January 20, 2008, and seven other times.

EXPIRATION DATE: Throughout the summer, fall, and winter of 2009 and 2010; when John McCain asked about it during the health-care summit February 26, Obama dismissed the issue by declaring, “the campaign is over, John.”

Obama is ripe for a primary challenge which is why he has announced his candidacy early in hopes of scaring away a serious challenger ~ but he underestimates the anger of his largely ignored former base. Michael  Moore sums up these feelings in his comments delivered and relayed at yesterday’s “ We Are One” rally at the state capitol in Honolulu ~ “ I want to thank you for turning out today to make your voices heard ~ and they ARE heard, even across ocean and land. Today, hundreds of thousands of Americans are joining with you to honor Dr. King by standing up for working people all over America. It was what he was doing in Memphis when he was killed 43 years ago today, supporting sanitation workers on strike.  Today everywhere is Memphis, and it’s not just sanitation workers being attacked. It’s teachers and firefighters and social workers — yes, all those greedy public workers who caused the Great Recession we are in! No, my friends, it wasn’t! It was the top 1% of the country who did this. THEY brought on the mortgage crisis. THEY made off with billions of dollars from our economy. THEY have systematically destroyed the middle class. And THEY have bought and sold the very people elected to represent us! America is not broke! It’s just that the wealthy have absconded with the money! They’ve removed it from circulation and left us begging for school supplies and fire trucks and libraries. Even the Wall Street Journal admits that the uber-rich are currently just sitting on almost $2 trillion of cash. They’re not creating jobs with it. They’re not re-circulating it. They’re just hanging on to it hoping to make more money off it by continuing their casino games in the stock market, the derivatives market, the credit default swaps market and any other crazy scheme they can invent. This has to stop. But it won’t stop unless we make it stop. 400 wealthy Americans now have more wealth than 150 million Americans COMBINED! But what they don’t have is the right to vote 150 million times. They only have 400 votes! Are we going to allow 400 bullies destroy the lives and livelihoods of 150 million of our fellow Americans? The time to act is now!”  READ MORE

Every seat in the House will be up for grabs again in 2012, as well as one-third of the seats in the Senate. The time to act is now and begins by insisting that we have a presidential candidate, Representatives and Senators who truly represent the people and will deliver on their promises ~ regardless of their party affiliation. That Presidential Candidate is not Barack Obama for I predict a successful primary challenge from someone on his left ~ someone like Russ Feingold.

The only Republican I would vote for now for President, without hesitation, is Ron Paul.

“We can have democracy in this country, or we can have great wealth concentrated in the hands of a few, but we can’t have both” : Louis Brandeis
Supreme Court Justice,1916-1939

About the Author: Allen L Roland is a Freelance Alternative Press Online columnist and psychotherapist. Allen is also available for comments, interviews, speaking engagements and private consultations. Dr. Roland is a practicing psychotherapist, author and lecturer who also shares a daily political and social commentary on his weblog and website www.allenroland.com .