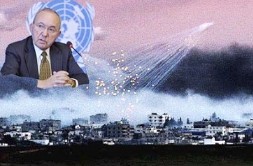 In a New Statesman article, law professor John Dugard ,who was a Judge on The International Court of Justice as well as being Special Raporteur for United Nations Commission on Human Rights, summarises the Goldstone apology saga : ‘there are no new facts that could possibly have led Richard Goldstone to change his mind about the UN-backed investigation into Israel and the conflict in Gaza.’

According to the McGowan Davis report, the Israeli ‘probe’ has resulted in “two convictions; one for theft of a credit card, resulting in a sentence of seven months’ imprisonment, and another for using a Palestinian child as a human shield, which resulted in a suspended sentence of three months.”

Dugard is clearly bewildered by Goldstone’s latest zigzag: “Richard Goldstone is a former judge and he knows fully well that a fact-finding report by four persons cannot be changed by the subsequent reflections of a single member of the committee.”  What made Goldstone change his mind “remains a closely guarded secret,” says Dugard.

Dugard is clearly frustrated, and, somewhat cynical here. But I guess that we all know the answer, because for some time now, we have witnessed Goldstone being subjected to relentless measures of exclusion and abuse from his Zionist brethren.

As a matter of fact, intolerance towards critical voices is inherent within Jewish culture, identity, and politics, for Zionism is clearly a demand for ideological collectivism.

But interestingly enough, Jewish anti Zionism is also no different in its modus operandi : all too often we come across a Jewish ‘progressive’ poisonous smear campaign against one ‘Jewish self-hater’ or another.

Jewish ‘cultural heritage’ could be presented as a chain of different attempts to silence, and even eliminate dissidence: some Jews were nailed to wood; some were assassinated ; others were stoned, and a few were excluded or excommunicated. Many lost their jobs and many others were subject to endless slander.

As tragic as it may sound, Jewish identity politics is an exercise in some different variations of collective hatred; hatred towards the Goyim, but also towards Jewish dissidence.

The Goldstone saga is then, an opportunity to peep into contemporary Jewish political intolerance, and Goldstone emerges as a tragic figure: he sacrificed his professional name for the sake of just a little Jewish empathy.

Yet he clearly forgot that forgiveness is not at all a highly regarded value within the ghetto walls — I learned yesterday that a group of American Jewish lawyers are preparing a civil lawsuit against Goldstone for libel.

I guess that revenge may as well unite them all.

As we are becoming accustomed to Zionism being the biggest threat to world peace, it is also interesting to learn how hostile Jews are towards each other.