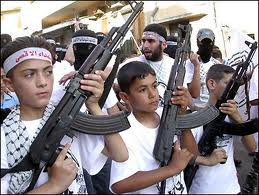 Look out folks. Terrorists are everywhere! If you’re not very, very, very careful – the terrorists are gonna get you! Consider the highly volatile situation in a very small northern Michigan pre-school.

Where:
Location classified. It may be considered an institution of learning (or fascism depending upon ones point of view) grades pre-school – 12. Obviously an area of great concern for the state and federal government. (You know, those liberal teachers indoctrinate our babies! Gotta watch em!) Location of the northern Michigan pre-school terrorist training center is confidential. Can’t have the pre-school types knowing where they can attend pre-school terrorist training for four and five year boys and girls.

Who:
Four and five year old boys and girls – their moms and dads – and sometimes grandparents.

What:
Pre-school boys and girls, their parents and grand-parents are not allowed through the pre-school door when dropping off or picking up the children. Reason: “HOMELAND SECUIRTY RULE”!

Grandpa and grandma – Wow – the old folks have real experience in woodcraft. They are experts in hunting and preparation of wild game. They know how to coordinate hunting groups and keeping everybody together. Really got to watch out for the old ones. They are a real threat to urban areas.

Why:
Wish I knew?

One of the grandparents reports the following:

Pre-school is located at the end of a school hallway. A folding, accordion style metal gate was across the hallway separating the school from the pre-school classroom. This effectively isolated the pre-school teaching area from the rest of the school building. An enterprising fire safety inspector pointed out that locked gates in a hallway restricts access to exit doors. The school was forced to unlock the offending gate. Now the school has an important security problem. Four and five years olds, moms and dads and those old people can not walk down a hallway and get access to the entire school. Of course they can enter a different door way and access the classroom from a distant doorway with the four and five year olds and their tools of terrorism, i.e. kiddy backpacks, snow boots, mittens, etc. (There is a confirmed report one of the girls even possessed a ever so dangerous folding unicorn pillow!)

The position of the school on why all this is necessary – why little ones, parents and grandparents can not step through a school doorway into a classroom to drop off or pick up little children is “…Homeland Security requires it”? (Prior to the unlocked accordion gate – access was allowed).

An enterprising grandparent (obviously a right-wing type) had the ill manners to “demand” to know “what homeland security rule requires this nonsense?” The grandparent has calls into the school district superintendent and to an official in the Headstart program. To date, the grandparent has not been provided with a rule that requires decent, very law abiding, good folks to stand outside of school building to sign their little ones in for a day of education. All in the name of Homeland Security!

The Real Lesson:
Little kids their parents and grandparents are made to stand outside of schools in horrible weather conditions. Hundreds of thousands of honest men, women, children, the infirm, elderly people, firefighters, school teachers, engineers, production workers, homemakers, tourists and hundreds of other types of people are poked, prodded, subject to body scan, full body searches and strip searches simply to get on an airplane. Billions of dollars of national treasure are expended daily, monthly, yearly and now by the decade to combat terrorism. Huge bureaucracies have been created to combat terrorism. Try and open a bank account in modern day America without different forms of government identification. Freedom folks? Ever heard “We have met the enemy and they are us?”

We need a national dialogue in America concerning terrorism. Sure there is a terrorist threat to America. Northern Michigan has militia types (look out – they’ll be after me now!) Any free society will have small groups of deviants. The international threat of al qaeda? My view is al qaeda exists. As a terrorist organization al qaeda has successfully destroyed much of America’s institutions of freedom. The Bank Secrecy Act of 1970 has been enhanced by USA Patriot Act of 2001. Are you aware that withdrawals that exceed $10,000.00 are reported to the federal government? How about federal law enforcement agencies monitoring what we the people read on the Internet? Both laws provide bureaucrats with dozens of lawful tools to spy, take into custody and interrogate us!

O.K. There are bad people in the world. Too true. Four and five year old children in northern Michigan are not among the bad people. Neither are their parents and grandparents. Americans can not take their kids to school, get on an airplane, ride a train, use a computer or live free without someone in the federal government having legal authority to interfere with us. My bet is there are guys in al qaeda having a great time watching us destroying each other.

Gotta watch them four – five years old. Never know what they might do next!

*Portions of this article are – of course tongue in cheek. The restrictions described are very real. The area in concern has a population of less than 18 people per square mile. The county does not have a single Macdonald’s in it. Nor is there a single red light in it.