The 20,000 Polish officers liquidated by the Soviet KGB in WWII are back in the news with the big ceremony of Russian and Polish dignitaries.

They were honoring the one year anniversary of the plane crash that killed the Polish political and military elite coming to attend the first joint Katyn Forest Massacre commemoration last year. The Russians were also releasing more archives.

The news stories today are focusing on the efforts of the Poles and Russians to forge better relations via a dual track of sharing information regarding the cause of the terrible accident and the tragic events at Katyn.

The truth had long hidden from the both the Soviet and supposedly free Western publics, who were engaged in their own cover up.

We at VT often try to take a different approach to such stories. We have a lot of ex-Intel people writing for the website, a suspicious bunch. So often when a big PR splash is being made about coming clean on some past horrible event we immediately start looking into what they are not revealing.

Do I have a personal interest in this? Sure. I am half Polish. My father’s people came over during the early 1900’s era Eastern European migration. And yes, I have ancestors who ended up in these graves.

The oldest con in the world is the phony final investigation which reveals more than in the past, but whose real purpose is to eliminate any further investigation about things they REALLY don’t want you to know about. Why? Good question. Because they are still doing such things…that’s why.

I only have space to outline this for you today. It’s a visually graphic story so I dug up a lot of archive exhibits to share that most of you have never seen. Much has been public since 1991.

These include the liquidation order signed by Stalin and released by Yeltsin when he opened up the KGB archives in the early 90’s. And I have a long clip of the first brutally filmed movie on the story.

In Gordon Duff’s Sunday reflections article he touched on morbid work of the  historical body snatchers and grave robbers.

They have taken huge piles of bodies from the actual perpetrator’s tally sheet and put them onto someone else’s to focus public outrage and demand for punishment on someone other than themselves.

In the Katyn case the Allies were hiding the complete knowledge that the Soviets had actually liquidated much of the Polish POW officer corp.

Why? Because during their KGB  POW interrogations they showed a ‘negative attitude’ about serving Soviet post war interests, not knowing that was a death sentence.

The KGB concluded that if released, these officers would be the future heart and brains of the Polish resistance movement when the Soviets set up their puppet government to control Poland.

Hence, it was better, cheaper to kill them all now during wartime conditions. Mind you the timing on these mass killing was after Russia and Germany had carved Poland up.

Goodbye 25,000 Polish officers, including cadets, and the intelligentsia of Eastern Poland.  Many were reserve officers, lawyer, doctors, professors, etc., anyone who was a poor communist prospect.

Now fast forward to the German attack on Russia. No more Polish territory defensive cushion. The Nazis were  deep into Russia after inflicting huge losses on their military.

The Soviets were now with the Allies. The free Polish government in the West was making demands to unite their army with badly needed officers helf by the Russians.

After Stalin stalled and stalled on locating and transferring them over, the Allies began to understand 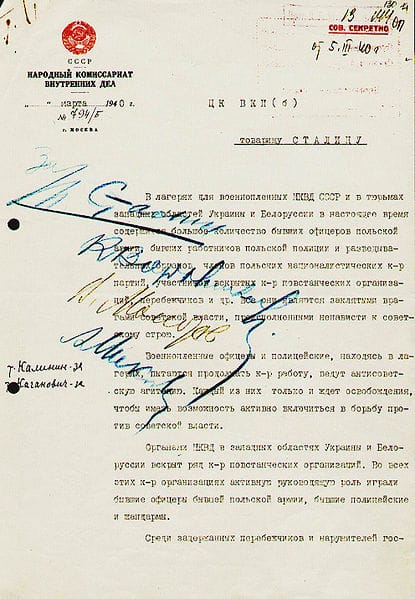 they had all been liquidated. Free Polish Intel picked up on how none of them had been heard from via mail after a certain date, kind of a strong hint of a bad outcome.

It was your classic “it ain’t pretty, but we have to do it for the greater good of the war to defeat Germany…we can’t bring the Polish dead back…we have to think of the others now, etc.”
When the Germans captured the Katyn area the mass graves were eventually found, exhumed (see photos below) and even Allied POW personnel brought in as part of the forensic examination teams.

They were obviously killed by the Russians but this was censored from the Western public, something routinely done during the war on a daily basis.

Any mistake, anything at all that might make the public unhappy with their own government corruption and ineptness was suppressed as ‘hurting the war effort’….a screw up’s dream come true. In future articles we will be detailing that this attitude is all and well in 2011.

Dear Folks, This video is pretty gruesome. If you have a tender stomach I would take a pass on it.

After the war, this Katyn Forest massacre mess had to be tidied up. The 20,000 had to be put in someone’s column, so they were put onto the Germans. ‘They did it‘.

Why? There are many reasons, but generally the Allies wanted to hide their own ruthless decisions during the war, and all the things they had censored.

For example when Roosevelt attended the Yalta conference he agreed to letting the Russians take over Poland as their ‘sphere of influence’.

But during his last election campaign when touring the heavy Polish districts in places in Milwaukee, without reserve he committed himself publicly to a free Poland after the war.

He looked them right in the eye and told them this when he had already signed Poland over to the Russians.

The CIA history section has this gem.  In 1944, President Roosevelt assigned Capt. George Earle, his special emissary to the Balkans, to compile information on Katyn. Earle did so, using contacts in Bulgaria and Romania. He too concluded that the Soviet Union was guilty.

FDR rejected Earle’s conclusion, saying that he was convinced of Nazi Germany’s responsibility. The report was suppressed. When Earle requested permission to publish his findings, the President gave him a written order to desist. Earle–who had been a Roosevelt family friend–spent the rest of the war in American Samoa.

More from the CIA history section: Katyn played a convoluted role in US politics and US-Soviet relations. Two US servicemen, brought from a POW camp in Germany, were at Katyn in 1943, when Berlin held an international news conference there to publicize the atrocity.

The ranking officer was Col. John H. Van Vliet, a fourth-generation West Pointer. After returning to Washington in 1945, he wrote a report concluding that the Soviets, not the Germans, were responsible.

He gave the report to Maj. Gen. Clayton Bissell, Gen. George Marshall’s assistant chief of staff for intelligence, who deep-sixed it.

Years later, Bissell defended his action before Congress, contending that it was not in the US interest to embarrass an ally whose forces were still needed to defeat Japan.

Roosevelt also was informed during the war that Standard Oil of New Jersey had  been refueling German subs at sea during the early part.

American banks were moving German funds around, assisting in communication with their foreign embassies, and other ‘trading with the enemy’ goodies. There were a few mid level prosecutions but no big boys.

Even Prescott Bush, the family patriarch had his companies seized during the war  by Treasury, for ‘trading with the enemy’.

These are just a few of the ruthless black lies that heads of states will engage in, and there begins a chain of events to continue hide this from the public for generations.

Why? Because governments to not want their publics to know that they are ruthless enough to do things like this to their own people…for getting re-elected, or their party remaining in power.

Another sterling example is the USS Liberty massacre by the Israelis in 1967, because contemporary politicians have not seen it worth risking financial political support from the Jewish Lobby here.

This national humiliation runs right to the front steps of the Navy that basically refuses to discuss the Liberty any more, obviously fearful of some horrible retribution, but correspondingly not thinking that their inaction is a breach of their oath to defend the country from all enemies.

They are covered in eternal shame for disgracing the military code of ‘we will leave no man on the field’.

The USS Liberty people were abandoned solely to avoid aggravating the Israeli Lobby here…where most all the politicians of both parties want their money and campaign support to remain in office. It is…to put it bluntly…political treason.

Unlike the holocaust….the Katyn Forest real holocaust, we have their names. We know who killed them, and why. And we know that so called free democratic countries suppressed the truth for half a century. And we know the base reasons they did it.

The 4,500 at Katyn was just the beginning. There were were other killing fields where Polish Officers have been found. KGB had a file that 21,857 had been killed.

This does not include the 90,000 that disappeared, nor any of the 1.5 to 2 million Polish civilians deported to Central Asia and Siberia, who also vanished. The Soviets had a lot to hide, as do many others.

Today the Polish officer corp from Katyn is no longer relegated to the back of the historical bus. Maybe it is time for another group to take their turn there, one who also has been guilty of mass murder and Nuremberg level capital crimes which warrant the death penalty, yet seems to have a lock on perennial victim status.