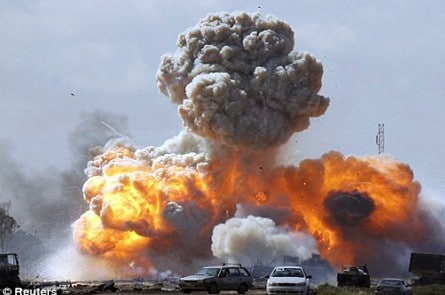 PUTTING OUT FIRE WITH GASOLINE IN LIBYA

Moussa Koussa, Libya’s Foreign Minister who defected to Britain on March 30, warns Libya is in danger of becoming the “New Somalia.”

Violence is erupting from both sides. The ugly truth is that with every missile strike, NATO kills more and more Libyan people. There’s nothing humanitarian about why. NATO cares nothing for the Saudi invasion of Bahrain, which has resulted in wide-scale disappearances of democracy activists. NATO cares nothing for the uprisings in Yemen, peppered with government snipers. Only Libya has been singled out for violent retribution. Of course, this is an oil grab. Gadhaffi challenged U.S. (and probably British) oil companies to reimburse Libya for the economic damage caused by U.N. sanctions tied to the Lockerbie bombing, which Libya had nothing to do with. The U.N. Security Council forced Libya to submit to the Lockerbie Trial and pay $2.7 billion in damages to the families of Pan Am 103, only for the U.S. to bribe witnesses with $4 million payments to testify against Libya’s men at Trial.

The judicial corruption at The Hague underscored the absence of evidence against Abdelbassett Megrahi and Al-Amin Fhaima. Under the circumstances, it’s hard to blame Gadhaffi for wanting to take something back for his people. The United Nations was grossly in error to apply sanctions to Libya in the first place.

But other than holding power for 42 years against a tide of popular support for fresh voices, is Gadhaffi really so bad? The Libyan people receive a cash distribution of oil revenues every year, houses, education and free health care under Gadhaffi’s regime. They enjoy one of the lowest poverty rates in the world—an enviable 5 percent, an 82 percent literacy rate, and a life expectancy of 75 years, 10 percent above the world average. Yet suddenly NATO is determined to break Gadhaffi’s hold on power, as if they’ve recently uncovered some great evil.

The facts are that an alarming number of Libyan rebels are returning from conflicts in Iraq, Chechnya, the Balkans and Afghanistan. Warfare is what they know, and they’ve brought it home with them. They have articulated no vision for the future. Instead, they have demonstrated an insatiable hunger for violence. No bombing is ever enough. Like tyrants they shout for more NATO bombs. They are guaranteed to destroy Libya if NATO doesn’t pull the plug.

NATO has only itself to blame. By rushing to take sides, NATO has lost the ability to apply its influence to both parties, and press for a non-violent transition to power-sharing. By adopting the role of arms supplier to the rebels, NATO has ratcheted up the internal power struggle in Tripoli, which should have exhausted its objectives in a couple of weeks, if not for outside meddling.

It doesn’t have to go this way.

Thankfully, the African Union has applied its influence in Tripoli to push for a ceasefire and immediate access to humanitarian assistance for Libya’s people. The Presidents of South Africa, Mali, the Congo and Mauritania achieved this victory in diplomatic sessions with Libyan leader Moammar Gadhaffi over the weekend, joined by the Chair of the African Union Commission and the Peace and Security Division.

The international community should demand that NATO accept the African Union platform immediately, whether Libya’s rebels approve or not. It’s NATO’s responsibility to deliver the message that for the sake of the world community, there must be a truce so that political talks can resume.

International oil corporations should likewise take an honest look at their bottom line, and acknowledge that a prolonged war in Libya is guaranteed to damage oil structures and distribution mechanisms upon which oil trading depends. Any protracted Oil War will hurt their profits, too. Most unforgivably, War in Libya will harm the global economy, driving up energy and freight transportation costs at a most difficult moment.

The African Union gets NATO out of this trap. It achieves the most pressing goals of the United Nations mandate in Libya—a ceasefire and humanitarian relief— upon which NATO has claimed authority for its air strikes. If Gadhaffi complies, there would be no further justification for NATO action.

Doctors Without Borders and the Red Crimson would be ideal to lead humanitarian efforts. Doctors Without Borders won a Nobel Peace Prize for its commitment to high quality medical care and triage in conflict zones, while staying clear of political entanglements. For its part, the Red Crimson is the Islamic version of the Red Cross, and would be ideally sensitized to Libya’s cultural lines.

It’s an excellent first stage. What remains to be seen is whether a second stage will be necessary to secure the peace—That would deploy a small Peace Keeping force, probably from Algeria, Morocco, Tunisia and Egypt in North Africa—who share Libya’s Islamic heritage and aversion to European Occupation. North African peace keepers would have the advantage of neutrality, which NATO has sacrificed by taking sides in the conflict.

As much as it would rankle Libya’s sense of sovereignty, given the rebels’ history of violence, in all likelihood there’s going to have to be some temporary peace-keeping force dividing these groups. The question is whether we do that today— or in 18 to 24 months when the world finally acknowledges the stupidity and waste of this unnecessary war. There’s going to have to be a solution at some point.

But NATO has to face up to some hard truth, too.

If elections in Libya are inevitable, then one more thing is also inevitable. It is strictly up to the Libyan people to choose their future leadership, including whether or not they want Gadhaffi or his sons to continue any role in the government. Genuine democracy demands that all comers have a right to throw their hat in the ring. Nobody has the right to stop them. The rebel forces have a very poor understanding of democracy indeed, if they expect to dictate which candidates paticipate in future elections.

For that matter, Britain, France and Italy are poor servants of democracy, if they are encouraging such misguided philosophies. That’s colonialist thinking, and there’s no place for it in a modern age.

If European powers are deeply persuaded of the Libyan rebels’ cause, then they should not be afraid to present a full slate of policy ideas and candidates before the Libyan people for their final decision. However European powers must accept that there are no guarantees Libya’s rebel forces would win a national election.

Quite the opposite is probably true. The longer the rebels fight, the more likely they are to antagonize the Libyan people who are going to cast those ballots. That’s one more excellent reason for NATO to exit this conflict as quickly as possible.

If this War goes on much longer, there’s strong probability NATO will win the battle—and lose the War. The world has only to look at Iraq to see what that would mean.

For the humanitarian welfare of the Libyan people and the goal of democracy itself, we must stop this War against Libya right now.

About the Writer: Susan Lindauer is the author of “Extreme Prejudice: The Terrifying Story of the Patriot Act and the Cover Ups of 9/11 and Iraq,” which describes her work as an Asset covering Iraq and Libya, and her arrest on the Patriot Act shortly after requesting to testify before Congress about the CIA’s advance warnings about 9/11 and a peace option in Iraq.