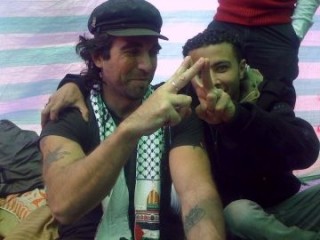 Death to a good guy

Who killed a peace activist in Gaza? People from inside the Gaza strip launch indirect weapons, i.e. mortars and rockets into Israel all the time. Israel responds with indirect fires and air assets. People die all the time. Pro Palestinian groups have for decades blamed Israel, America and people of the Jewish Faith for the plight of the Palestinian people. Pro Israeli groups have for decades blamed left wing types, Islam, Arabs and many others for the plight of the Palestinian people. The hate goes on from generation to generation.

The International Solidarity Movement is shocked and deeply saddened by the killing of our friend and colleague Vittorio Arrigoni. Vik was an inspiring activist and generous soul. Please keep his family and friends in your thoughts. (Note 1)

Al Jazeera’s Nicole Johnston reports on Arrigoni’s abduction and subsequent brutal killing in Gaza
Hamas officials have said they found the body of an Italian peace activist based in Gaza who was kidnapped by armed assailants.
The officials said Hamas police stormed an apartment in Gaza Strip belonging to a member of the group that released a video of the activist, identified as Vittorio Arrigoni.

Mahmoud Abbas, the Palestinian president, strongly condemned the murder as he conveyed his condolences to Arrigoni’s family.
“This heinous crime is far from the traditions of our people, who are struggling for freedom and independence,” he said.
Abbas added that the role of the International Solidarity Movement (ISM) – which Arrigoni was a part of – in defending Palestinian rights was highly valued.

Earlier in a statement, the Hamas interior ministry said the man was killed shortly after he was abducted at midday on Thursday.
Ehab al-Ghussein, ministry spokesman, said he was killed “in an awful way.” He said the kidnappers planned from the beginning to kill him, not to trade him for captives. (Note 2)

Within various Palestinian movements – all is not well. Many of them don’t like each other. An innocent man was killed (…in and awful way…”) (Note 3.) Diplomatic conveys have been attacked inside of Gaza too. More violence is on the way!

Remember the much condemned Israeli action with a recent “peace” flotilla somewhere off the African continental coast? Folks like William Ayers, Bernadette Dohrn – (remember these two – back in the hate the troops condemn America and Americans days of the RVN war) joined by one of the Code Pink founders Jodie Evans were involved in the so-called Peace Flotilla. One source relates the flotilla was created to provoke a violent class with Israeli Defense Forces. Looks like the leftist succeeded and nine people died. (Note 4) Israel got some expected bad press and the left wing types set up the next incident of violence. * One of the darlings of the left – Bernadette Dohrn is rumored to take direct part in the next flotilla. As a convicted felon – she may get an opportunity to view the inside of a Middle Eastern Prison? I do wish her every success in comparing the luxury of an American Prison with a Middle Eastern one.

I’ve heard more than a few bleating calls and some angry ones demanding that Egypt end its peace treaty with Israel. O.K., thata do a lotta good for peace on earth will it not? Remember a much maligned President Carter getting Muhammad Anwar Al Sadat and Menachem Begin to agree to keep their people from killing each other way back when? How many of you know that there is a permanent Multi-National Force in the Sinai separating the militaries of Egypt and Israel? Been working for about four-plus decades.

Rather than end the peace agreement between Israel and Egypt, why not expand it? Secretary of State, Ms. Clinton can get some really good diplomats together from all the involved parties and get the Palestinians some of the land occupied by Israel – deed it to the Palestinians! Expand the Multi-National Forces to keep the peace and maybe we people of the world can get some of the killing to stop?

Just an idea, folks. Can it work? Sure. Easy? No! Better than what’s going on now, my view is yes. There have been and will be too many tragedies like Vittorio Arrigoni. He was one of the good guys. A for real peace activist that worked with everyday people. A man that did more than run his mouth.

*Unconfirmed data the three lovelies have met with members of Senator (Hanoi) John Kerry’s staff. Looks like the “war hero” may be up to his continuing left wing ways. More to follow when information becomes available. Never know what Hanoi John may be up to.