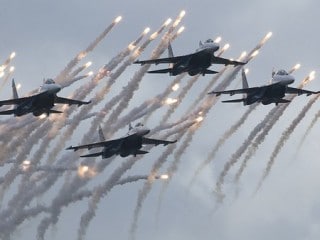 President Obama’s speech Sunday night announcing the death of Osama bin Laden drew twice as many viewers as last week’s Royal Wedding and outpaced his recent policy addresses. Posted by inside.ev.com.  The timing is coincidental to the Trump/Chump/Obomb’emAll/ freak show to shadow the rigged election of another Democratic [4] year term.

An incoherent incongruous and illogical speech whereby a contradiction of International Laws is the order of the day.  ‘Bin Laden body dumped mafia style – little to win back US credibility’ Posted by RT.   An obvious assertive flawed credibility designed to instill fear, includes supressing the rights to global masses of citizenry self-dignity, addressed with flagrant U.S. agenda of human rights violations, genocides, including repressive brutal rule of empire.

Why are jingoistic flag wavers jubilant? Why is no one demanding that U.S. belligerence be halted?  Why are citizenry not demanding the bureaucratic apparatus direct focus and finance to the economy, jobs, opportunity, education, social services, and the needs of it’s children?  Now that the Osama BIN-CIA agent parody demise has been reported!!!

Instead of dismantling decades of bellicose policy, belligerent inhumane war on human self dignity.  The U.S. bypasses a great nation’s logic, reason, education, law, and common sense with the announcement of the demise of Osama BIN-CIA-agent.  Subsequently, not one syllable spoken addressing the possibility that belligerence by the anachronistic 20th Century U.S. flawed military and quaint underachieving D.C. poltroons will terminate.  That the outrageous shakedowns, theft, and confiscations of U.S. citizenry labor, assets, and property will finally cease .

Commencing with the Manhattan Project c.1942 the U.S. has been expending nuclear weapons [DU] Depleted Uranium munitions on defenseless women and children civilians up to and including 2011. Operating a crime against humanity masking the ruse “The possibility of a ruthless dictator or a terrorist group getting nuclear weapons is a continuing threat to world peace.”

Thereby, operating a reverse victim pathetic vengeance or a pretense of defense by accusing other nations of dispensing WMD.  Article published in VT “The more I scout, the worse things look for the Windy City. Late Mayday, after Obama said that Osama was dead, I posted OBL death means “nuclear hellstorm” vows KSM, “Rahm the Bomb Takes Aim” Posted by CPT MAY

Osama BIN-CIA agent single handed alleged 911 mastermind of conflict, terrorist murderer of thousands, by his death has enabled U.S. senseless arrogant and phony superiority dictates to the extreme preeminent terrorist rogue state on the planet.  Translation: one skinny CIA agent  shill hiding in a cave out witted and beat the world’s  mighty military and greatest empire into the abyss.  Sorry, an impossible feat!!

Obomb’em-All answers the world as the premier criminal murderer and killer of defenseless men, women, and children in the millions.  No logic and reason exists that would offer or explain arguments to his flawed Zionist handlers thesis.

In conclusion, however historical records, documented facts, and self-admitted anomalies compound this reality daily that the U.S. by eliminating criminal 911 evidence,  preemptive war on humanity,  dutiful subservience to a foreign entity, including a no recourse welfare rigged colluding banking and financial system is propagating self anointed reverse victim third class world status.  20st Century anomaly responding to 21St Century problems the U.S. has committed itself to the zenith of defunct nations.  The absurd number one debtor nation in the world from the greatest creditor nation in recorded history.

Instead, the U.S. will continue to pursue syndication, monopolies, and cartels of other nation’s natural resources, labor assets, and property.  Refusing opportunity to negotiate with other indigenous peoples catapulting forward with blindsided stupidity manufactured phony superiority and infinite hollow arrogance.  Expending, the nation’s blood, and treasure with cavalier impending total bankruptcy.