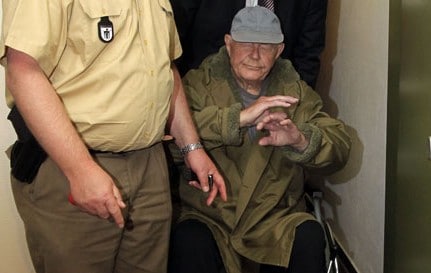 “A German court has found John Demjanjuk guilty of helping to murder more than 28,000 Jews at a Nazi death camp in Poland.”

Not until paragraph 17 does one find this jolting fact: “No evidence was produced that he committed a specific crime.”

That is correct. No evidence was produced, no witness came forward to testify he ever saw Demjanjuk injure anyone. And the critical evidence that put Demjanjuk at Sobibor came — from the KGB.

First was a KGB summary of an alleged interview with one Ignat Danilchenko, who claimed he was a guard at Sobibor and knew Demjanjuk. Second was the Soviet-supplied ID card from the Trawniki camp that trained guards.

There are major problems with both pieces of “evidence.”

First, Danilchenko has been dead for a quarter of a century, no one in the West ever interviewed him, and Moscow stonewalled defense requests for access to the full Danilchenko file. His very existence raises a question.

How could a Red Army soldier who turned collaborator and Nazi camp guard survive Operation Keelhaul, which sent all Soviet POWs back to Joseph Stalin, where they were either murdered or sent to the Gulag?

As for the ID card from Trawniki, just last month there was unearthed at the National Archives in College Park, Md., a 1985 report from the Cleveland office of the FBI, which, after studying the card, concluded it was “quite likely” a KGB forgery.

“Justice is ill-served in the prosecution of an American citizen on evidence which is not only normally inadmissible in a court of law, but based on evidence and allegations quite likely fabricated by the KGB.”

This FBI report, never made public, was done just as Demjanjuk was being deported to Israel to stand trial as “Ivan the Terrible,” the murderer of Treblinka. In a sensational trial covered by the world’s press, Demjanjuk was convicted and sentenced to hang.

But after five years on death row, new evidence turned up when the Soviet Union collapsed and Russia opened up. That evidence wholly validated the claims of Demjanjuk’s defenders.

Not only had Demjanjuk never even been at Treblinka, the Soviet files contained a photograph of the real “Ivan” — a larger and older man.

To its eternal credit, the Israeli Supreme Court reversed the conviction, rejected a request to retry Demjanjuk as a camp guard elsewhere in Poland, freed him and sent him home to America.

Exposed as a laughing stock, and denounced for fraud by Ohio district and appellate courts, the Office of Special Investigations began crafting a new case, John Demjanjuk of Sobibor, to deport and try again the old man whose defense attorneys had made fools of them.

Thus the Sobibor story and Demjanjuk’s supposed complicity in the murder of 28,000 Jews — though, as the BBC notes, no one testified at the trial that they ever saw John Demjanjuk injure anyone.

Consider the life this tormented American has lived.

Born in Ukraine in 1920, as a boy he endured the Holodomor — the famine imposed on his people in 1932 and 1933 by Stalin and his hated henchman Lazar Kaganovich, which resulted in the starvation and death of somewhere between 5 million and 9 million Ukrainians.

It has been called by historians the “forgotten Holocaust.”

Conscripted into the Red Army, Demjanjuk was captured in the German blitzkrieg. Unlike American and British POWs, whom Germans regarded as racial equals, Ukrainians were untermensch who could be used for medical experiments.

Not only did Demjanjuk survive, he managed to evade the Allied order, under Keelhaul, for all Red Army POWs to be repatriated to Stalin, which was the Soviet dictator’s demand before he would return the U.S. and British POWs his troops liberated in the march to Berlin.

In the war’s aftermath, Demjanjuk married his wife Vera, who had been conscripted in the Ukraine and brought forcibly west to work in the German economy.

Thence he moved to Cleveland, became an autoworker, raised a family and practiced his Christian faith. But he made a mistake.

He sent his wife to Ukraine to tell his aged mother that he had survived the war and was living in the great United States of America.

Word got around the village. The KGB came calling. Swiftly, the payments his mother had been receiving for her war hero son were halted, and suddenly, there turned up an ID card that said John Demjanjuk had been trained at Trawniki to be a Nazi camp guard.

The KGB began feeding OSI from its “files,” as OSI began a manic persecution of Demjanjuk that has lasted 30 years.

Stalin died in bed in 1953. Kaganovich died with his family around him in Moscow in 1991. And John Demjanjuk, 91, after spending five years on death row for a crime he did not commit in a place he never was, is stateless and homeless in a Germany where veterans of the SS walk free.

That is justice — in our world.